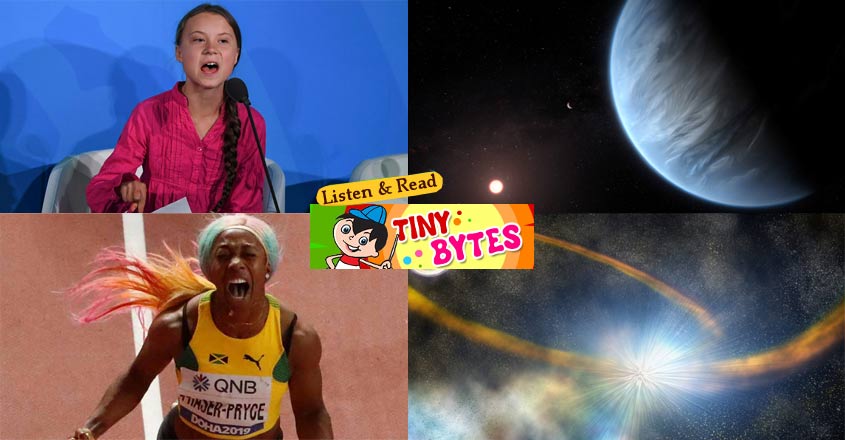 'How dare you?' Greta Thunberg asks world leaders at UN

A visibly angry Greta Thunberg berated world leaders as she addressed a UN climate summit last week, accusing them of betraying her generation by failing to tackle greenhouse gas emissions and asking "How dare you?"

The Swedish teen, who has become the global face of the growing youth movement against climate inaction, began by telling her audience: "My message is that we'll be watching you," eliciting laughter. But it was soon clear that the tone of the message would be very serious.

"This is all wrong. I shouldn't be up here. I should be back at school on the other side of the ocean," the 16- year-old, who is taking a year off from her studies, said.

"You come to us young people for hope. How dare you?" she thundered.

"We are in the beginning of a mass extinction, and all you can talk about is the money and fairy tales of eternal economic growth. How dare you!"

Thunberg, who often appears uncomfortable in the limelight and is seen as a reluctant leader, then detailed the various targets that were being missed, heightening the risk of "irreversible chain reactions beyond human control."

A minor planet, between Mars and Jupiter, has been named after 'Pandit Jasraj', the doyen of Indian classical vocal music.

International Astronomical Union (IAU) has named minor planet 2006 VP32 (number -300128) , discovered on November 11, 2006 , as 'Panditjasraj'. 'Panditjasraj' traverses the cosmos between the orbits of Mars and

Jupiter. "It was made official by IAU on September 23, followed by a citation," his daughter Durga Jasraj said. With this honour, Padma Vibhushan recipient Pandit Jasraj has become the first Indian musician to join the galaxy of immortal composers like Mozart, Beethoven and Tenor Luciano Pavarotti.

Jamaica's Shelly-Ann Fraser-Pryce powered her way to 100 metres gold on Sunday to become the first person to win four gold medals over the distance at the athletics world championships.

Fraser-Pryce, who returned to the track in earnest only last year after giving birth to a son, stormed across the line in a season-best time of 10.71 seconds followed by Britain's Dina Asher-Smith in 10.83. Ivory Coast's Marie-Josee Ta Lou, world silver medallist at 100m and 200m in London two years ago, completed the podium, grabbing bronze with 10.90.

The victory cemented Fraser-Pryce's status as one of the all-time great sprinters, with her four world titles going alongside Olympic gold won in 2008 and 2012 and perhaps more to come at the 2020 Tokyo Summer Games.

The 32-year-old Jamaican now stands alone in terms of the world championships where her four titles are one better than her compatriot Usain Bolt and Americans Carl Lewis and Maurice Greene.

Scientists have captured a view of a colossal black hole violently ripping apart a doomed star, illustrating a extraordinary and chaotic cosmic event from beginning to end for the first time using NASA's planet-hunting telescope. The US space agency's orbiting Transiting Exoplanet Survey Satellite, better known as TESS, revealed the detailed timeline of a star 375 million light-years away warping and spiralling into the unrelenting gravitational pull of a supermassive black hole.

The star, roughly the same size as our sun, was eventually sucked into oblivion in a rare cosmic occurrence that astronomers call a tidal disruption event.

Such phenomena happen when a star ventures too close to a supermassive black hole, objects that reside at the centre of most large galaxies including our Milky Way.