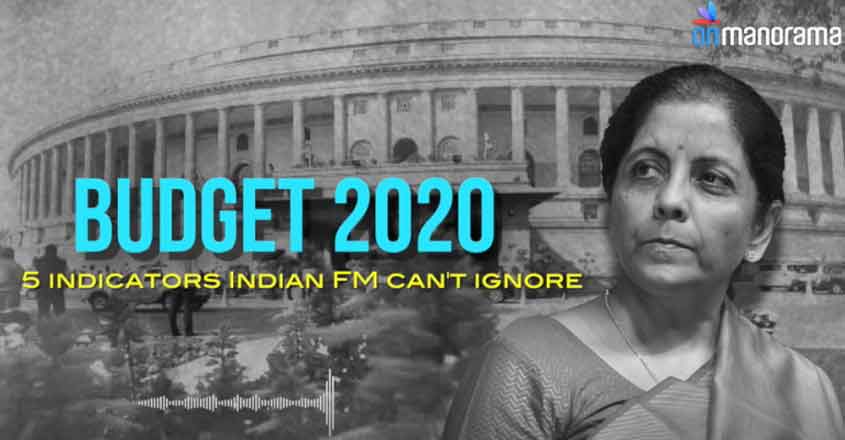 India's Finance Minister Nirmala Sitharaman and her team of experts are preparing the Union Budget for 2020-21 as we speak and as you all know they have to do a tough balancing act this time.

Retail inflation, growth, fiscal deficit, employment rate, consumption -- some of the most crucial factors of the Indian economy or any economy for that matter, are looking at their worst performance in years.

Only a budget which weighs in the effect of these 5 factors can revive the economy from the current status.

The spike in retail inflation to 7.35 per cent in December, piercing way past the Reserve Bank of India's 2 to 6 per cent target, will be the biggest challenge for the budget planners.

Inflation, which was only 2.11 per cent last December, has been showing a consistent rise since August 2019.

Put this in perspective with India's six-and-a-half-year low growth rate of 4.5 per cent in the last quarter and you are staring at the most dreaded trap of modern economy- 'stagflation'.

Fiscal deficit, the net borrowing of the government in the first eight months of FY20, stood at 15 per cent above target.

India's unemployment rate which hit 7.7 per cent in the month of December as opposed to 5.49 per cent a year ago, indicates that the country needs to aggressively work towards job generation.

Official data indicates that the country hit a 45-year-high unemployment level in 2017-18.

The fall in consumer demand after a steady growth for four consecutive decades is yet another issue the government has to tackle with.

If the figures in the leaked NSSO survey are to be taken at face value, it implies that India -- both urban and rural — is grappling with several consumption related issues such as a severe trade-off between education, health and nutrition; undernourishment; and falling living standards.