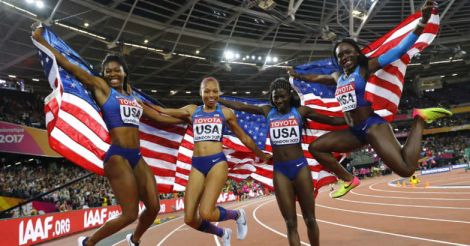 From left: Aaliyah Brown, Allyson Felix, Morolake Akinosun and Torie Bowie of the US celebrate after winning the 4x100m relay gold. Reuters

London: Individual champion Tori Bowie anchored the United States to victory in the women's 4x100 meters relay at the World Championships on Saturday.

It was the sixth time the US have won the event and the gold was a record 15th World Championship medal for Allyson Felix, who ran the second leg.

The Americans, Olympic gold medalists in Rio last year, were led off by Aaliyah Brown who flew out of the blocks to start the run that brought them the world title they last won in 2011.

Felix, part of that winning team in Daegu, took the baton to Morolake Akinosun who handed on to Bowie, the 100m world champion.

The 26-year-old had pulled out of competing in the 200m earlier in the week due to suffering cuts and bruises in her sprint triumph last Sunday.

However, she looked in no discomfort as she surged down the final straight to win in 41.82 seconds.

"We are on top of the world," Bowie said. "I am grateful to be able to run and bring these ladies home to the gold. It has been a mixed week but two gold medals is amazing for me."

Bowie was shadowed all the way to the line by Briton Daryll Neita who led her team to silver, in 42.12, ahead of 2015 champions Jamaica who were missing their usual anchor runner in Shelly-Ann Fraser-Pryce.

Britain's silver represented a big stride forward for the team, having won bronze at the Olympics.

"I tried my best down that last stretch and I'm glad to bring the team home to silver. We work so hard as a team so we are delighted," Neita said.

The evening session proved a double sprint delight for Britain as the men won a sensational gold in their race, watched by their female counterparts beside the track who leapt and screamed in delight at the final result.

"We've smashed it. We worked so hard for this. Us girls and boys have both done so well and we're so proud of each other," Neita added.