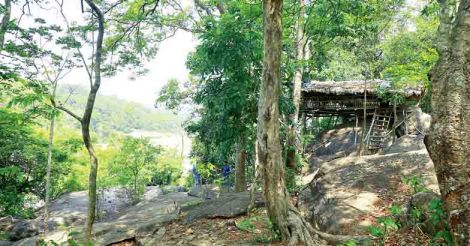 Bhoothathankettu is a rustic tourism destination teeming with myths, folktales and history, apart from the scenery. Stories flow out like a swift stream from Roy, the guide.

The first tale is related to Lord Shiva. The Lord, who considers his consort Parvathy as an equal, once set on a journey from Mount Kailas and reached the banks of the Periyar. He then sat in meditation at Thrikkariyoor. Parvathy sent the demons of Shiva in search of the Lord.

The demons built a dam with huge rocks for Parvathy to cross the river. Shiva came to know of this and playfully removed a rock to prevent Parvathy from reaching him. The demons failed in their attempt to create the path to Shiva. 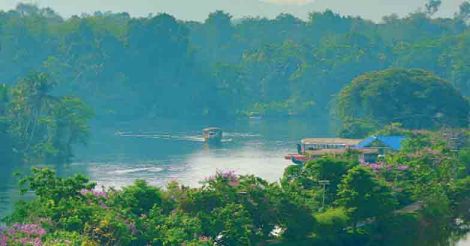 Roy heard the legend of Bhoothathankettu - the dam built by demons – from the tribal elder of Thalumkandam hamlet. However, the officials of Archaeology Department refuted this tale. They established with proof that the rocks, some as big as elephants, were placed across the river by the Travancore Maharaja.

When Tipu Sultan made preparations to attack Travancore, the Periyar flooded, thwarting his plans. However, the flood did not occur naturally. A dam had been built with huge rocks at the spot where Periyar and Edamalayar joined. One rock of this structure was removed to create an artificial flood.

The gap created when the rock was shifted can still be seen. The wide river narrows down at this spot and finds its way through this gap before flowing to Aluva.

“The depth of the river at the gap is yet to be measured. The bodies of people who drowned here came up only after three days,” said Roy, describing the mystery surrounding the area. 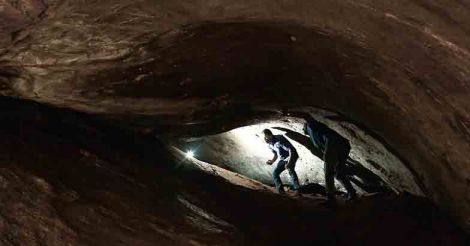 A one-km walk through the forest takes you from the new dam to the banks of the Periyar at Planchod. Roy explained the features of the trees as well as the names of the birds we came across on the way. He had picked up the information from the elders in the tribal hamlets. Traditional wisdom, including treatment for poison as well as ornithology, was passed on to Roy by the elders.

The new dam is on the southern side of the Edamalayar river and water flows in from the river that passes by Pooyamkutti and Kuttampuzha and from the stream that touches Anayirangal and Thookkupalam to fill the reservoir.

Even during the height of summer, boating can be done in the reservoir of Bhoothathankettu dam. This is the main factor attracting tourists to the place. More tourists will arrive after the completion of the work on a new road connecting Kuttampuzha and Pindimana panchayats and construction of two canal shutters in the catchment area. 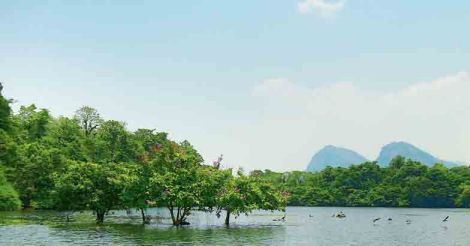 The road to Edamalayar passes in front of the forest range office beside the dam. There is bus service till Vadattupara, beyond which is the forest. Tourists are not allowed in the area of the Edamalayar power house. A forest path leads to the Malayattoor worship centre, but entry is allowed only on three days during the pilgrimage. Tourists are barred also in the 42 Adivasi settlements at Thalumkandam.

The path to the old Bhoothathankettu starts opposite the range office. There are numerous medicinal plants along the path. Rare trees like Venmaruthu which is considered much stronger than an axe, Devatharu that spreads sweet scent all around and the Yakshipala which entices people are common. After Changalathodu stream, there are yet more exotic trees.

The guide can explain the features of each. The stump of the Cheeni tree used to build boats is so wide that even a family can rest comfortably around it. Another attraction is the Pullanthi plant. Crush a piece of it and you get at least two glasses of water. Among the strongest trees in the area is Thambakom which is used to make railway sleepers. Aranjali, the bark of which was used by sages in ancient times and Perinja, which according to Ayurveda is the original Inja plant, are seen here.

Some Chere trees are also present, which can cause severe itching and swelling if coming into contact with it. Nearby, Tanni trees are present. According to Adivasis, the discomfort caused by Chere trees can be lessened by chanting a hymn hundred times and circumambulating the Thanni tree. 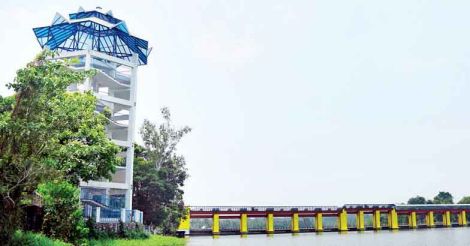 Parasitic creepers that destroy trees are yet another attraction. The creepers absorb the sap of the trees and remain till the trees turn hollow. After the last bit of life is lost from the trees, the creepers find their way to other trees. The word creeper also acquired the meaning ‘parasite’ from this natural occurrence, said the guide, Roy.

A little way ahead was a rocky outcrop on the hill. Wild bamboo covered the rock, which had an opening in the middle. It was the entrance to a cave. It is believed that the cave was created by the Chera kings in ancient times to hide their weapons.

From the mouth of the cave, Roy entered the area with the help of a bamboo stem. A person 5.5 feet tall can stand erect in the cave. The interiors were levelled with some tool. Roy gestured us to remain silent; a hedgehog had made the cave its home. It crouched in a corner, eyes gleaming red under the torchlight.

The cave extended beyond the spot the hedgehog was seen. Roy said that to his knowledge, nobody had gone into the cave beyond that point during the 23 years he has been working as a guide.

A rock in the shape of a circle was barely visible in the dark of the cave. According to local legend, the circular rock is a door which led to vaults holding several secrets.

The trek to the dam built by demons can be completed in about two-and-a-half hours. The ideal time to enter the forest is by 8.30 am and return by 11 am. The path on the left side of the new dam leads to the watch tower. Visitors can take the steps to the fifth floor for breathtaking views of the dam and the forest.

From the bottom of the watch tower, a path paved with tiles lead visitors towards the southern  direction and end at the boat landing. Five boats are available for visitors to take a one-hour trip in the reservoir and catchment areas up to Kuttikkal. Sambar deer emerging out of the forest to quench their thirst in the lake is the main attraction of the boat ride. A 10-km trip upstream from Kuttikkal takes you to Neriyamangalam bridge via Thattekkad. 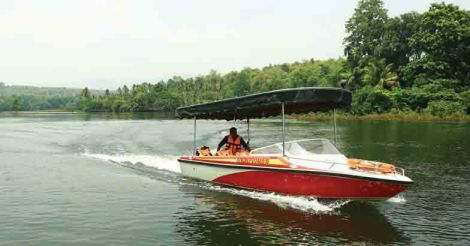 Bhoothathankettu is ideal for a one-day trip, offering trekking, boat trip as well as the stunning sight of water gushing down when dam shutters are opened. “The fame of this place is yet to reach most people; but in five years, Bhoothathankettu will turn into the number one tourist spot in Kerala,” says Roy, taking peep into the future.

Dos & Don’ts for visitors: Bhoothathankettu is located on the border of Pindimana and Kuttampuzha panchayats. The area is rich in wildlife and tour guides appointed by the forest development committees are ready to help. Visitors need to purchase entry tickets. They should not dump plastic waste inside the forest, smoke, swim in the river or stray away from the trekking path into the forest.

Forest camp sheds have been built at Njayappilli, Anakkayam, Munja, Vilangupara and Elavanchode. Steps are being taken to organize trekking to these camps. The trekking will be in groups of ten persons each and will cover about 30 km of the forest. Officials of the Forest Department will lead the trek, said Sijo Samuel, the Forest range officer.

A Thrissur 'mana' where snakes are revered

Pambumekkattu Mana has the right of tantrihood at the famous Nagaraja Temple in Nagercoil.