Are you game for a date with the lords of the 'nether' world? Head then to the snake park at Parassinikadavu, Kannur, the only such facility in Kerala.

The park was started in 1982 as part of a center for snakebite cure by CMP leader M.V. Raghavan. In those days, people who came with snakebite victims also brought along the snake which bit. This made it easier for the medics as the treatment regimen and medicines were different for each species of snake. There were traditional healers who could identify the snakes by examining the depth of the wound and the fang marks of the bite.

The snakes that were brought along this way were the first inhabitants of the park. The park was set up to serve as an educational and awareness-creation centre. 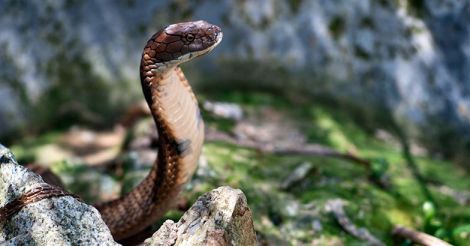 In 1993, M.V. Raghavan's political opponents sought to settle scores by setting the park on fire. Sixty-nine snakes perished in the fire. When it was sought to be reopened in 2009, objections were raised and political opponents said the park was 'illegal.' After many legal battles and a certificate of recognition from the Zoos Authority of India, enabled the park reopened. Now, it is one of the most popular tourist attractions of north Kerala. The park also houses a marine aquarium.

The park has a variety of snakes, from the ubiquitous water snakes to the king cobra. This biggest-of-all venomous snakes is the only one that builds a nest and hatches its eggs. To get an idea of its lenght, one needs to just look at the skin that a king cobra sloughs off.

The king cobras here are darlings of the media. As in the Pilikkulam Biological Park in Karnataka, efforts were are on to create conditions conducive for mating and laying of eggs, park sources say. A king cobra laid egs in April but did not hatch, causing much heartburn to the staff.

A tour of the park starts at the marine aquarium which shows varieties of fish, seahorses, star tortoises, etc. Then there are crocodiles, peacocks, jungle cats, porcupines, otters, civet cats, bonnet macaques, jackals, cranes, different types of owls, geese, and duck. There is a small garden too with a lot of herbs.

The snake park has pythons, pit vipers, cobras, green snakes, green whip snake, Russell’s viper, sand boa, and kraits. And there is a video show that explains the features of each species. The show is a myth-buster which clears many misconceptions on snakes. There is a children’s park complete with swings and slides. There is are old-fashioned wayside shops selling sweets and light refreshment.