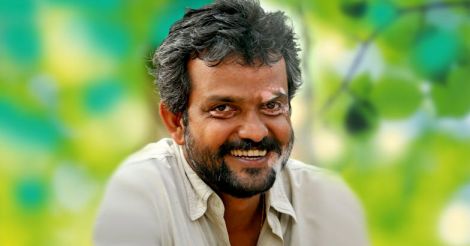 It shows in every bit of cinematographer-filmmaker Rajeev Ravi's being that he loves his home town Ernakulam. Be it the way he talks (in typical Ernakulam slang), the way he laughs or just the way he mixes in sugar to his black tea. He is calm, yet there is an urgency, a restlessness, and then there is silence again. His love for the city is palpable, with his eyes lighting up when I mention that I, like him, spent most of my life in Ernakulam, too.

When we meet at Prasad Lab, where Rajeev is working on the post-production works of friend and collaborator Anurag Kashyap's Bombay Velvette, we talk about a horde of things. From his love for the writings of Kazantzakis to his childhood days in Ernakulam, his starkly leftist political ideology and why he thinks that films are not a way to waste 2 hours from a person's life.

As he talks, he reminds me of a righteous older brother or the straight-talking student leader from college, who would share with us his many readings, make us see what the world holds for us and guide us through its many sideways. A figure, we both agree, is missing in these times. And, that is where he says the idea of Njan Steve Lopez came to him.

"In the 90s when we entered college, we had a lot of heroes around us. There were seniors from our college, student leaders. They were a great source of inspiration. They used to tell us good things. There were people who could point out right from wrong and inspire us politically. But that is not there anymore," rues Rajeev. He says that the older generation has no right to blame their children because they are the main cause for making their young ones who they are today. The film, he says, is then actually for the fathers.

"Everyone is compromising in some way or the other, they are all sold out. There are no ideals, they just want to amass some wealth somehow. It could be for their families, they may be good people. All their actions may be justified also. But that is not correct, right?" he asks.

In Njan Steve Lopez, a teenager who is exposed to the dark world of the gangsters comes to realise that his father is also a silent part of the huge chain. "Just imagine if a boy his age starts feeling that his own father is a thief, what will he go through?" This is what he wanted to explore, says Rajeev.

Born and raised in Ernakulam, Rajeev's first serious brush with films was when he saw Ormakkai with his cousins at 11. The trio who had stepped out to watch the English film 'A Fish Called Wanda' watched the Bharathan film about a deaf-mute sculptor instead and that disturbed Rajeev. "That was when I realised that films can have such a large impact on us," he says. "And that disturbance or feeling of heaviness which makes us introspect is what I like rather than being "entertained" and “laughing."

Is that why his films have a sad ending? In his first film Annayum Rasoolum, the Christian girl who falls in love with a Muslim boy commits suicide to stop her marriage with a man she doesn't love. And in Steve Lopez, the innocent teenager, too, meets with a fateful end when he gets entangled in the world of the gangsters. So, why this sense of futility and hopelessness; is he a pessimist? "Never, I am not a pessimist. But I don't believe that you can fight the system from within it," he says. "Tell me something, what does the ordinary Indian, the so-called janta see when they look around? Do they see anything at all? Do they feel anything at all? Do they even have a choice? They have no way out, so isn't it a hopeless situation for them? I don't see a point in making happy films and making people happy."

A graduate in cinematography from FTII, Rajeev credits the films shown on Doordarshan during his times as one of his major influences. Even as a youngster, books used to mesmerise him more than films. He lists Nikos Kazantzakis's Saint Francis of Assissi and Zorba and Roberto Bolano's works among his favourites. Unlike the usual filmmaker who thinks that cinema is above all, Rajeev seems to have a very clear idea of the bigger picture.

To him, films are increasingly becoming a tool in the hands of the capitalist to fleece the working class and squeeze out their little earnings out of them. He also rues over the sad state of film education in the country, saying that institutes like FTII are now just polytechnics. "The concept of an art school is dead," he says. "Now the word art is used only to sell something. Whoever tries to bring in art to films will find themselves burning a large hole in their pockets."

Having debuted as an independent cinematographer in Madhur Bhandarkar's Chandni Bar and having went on to collaborate with Kashyap on almost all his films, Rajeev also took time out for Malayalam films like Shesham, Chakram, Classmates and Anju Sundarikal. He won his first National Award for wife Geetu Mohandas's film Liar's Dice in 2013, which has also been selected as India's official entry for the Oscars. While Geetu says he is her "eye", Kashyap says, "I don't need to even talk to Rajeev to convey my thoughts". "We have reached such a stage where he gets exactly what I want and how I want it," says Kashyap.

One of the many youngsters from FTII who came to Bombay in the early 90s, Rajeev says that the city has changed beyond recognition. His next directorial venture is set in Bombay and deals with the lives of the migrant community in the city. In the process of writing the script, he has finalised on Fahadh Fazil and Geetanjali Thapa as the lead. "I make films when I have something to say, about subjects I feel strongly about and that for a community," says Rajeev. "I thought I would start this project in September but then I don't want to rush into it and do a shoddy job."That is how I see films. And entertainment does not come in my scheme of things."

Making films on such offbeat subjects is not that easy, admits Rajeev. There is minimum or no support from exhibitors and distributors. The reason why he, with his friends Resul Pookutty, Madhu Neelakandan, Sunil Babu, B. Ajithkumar and Kamal K.M, has formed Collective Phase One, a banner to make the films they want. The collective has also bought some land in Wayanad where they have started cultivating grains and vegetables, which was used in the catering for his last film Njan Steve Lopez.

As someone who has grown up watching films of John Abraham, Bharathan, K.G. George and Padmarajan, Rajeev dismisses the moniker of New Generation. He says there is nothing new about the so-called new wave in Malayalam. "There are a bunch of youngsters who are influenced by the large amount of information that has opened up for them. It may not be the right information," he says. "They are influenced by it and are trying to be contemporary or modern.

The only problem is that they are not grounded. They are not thinking about what went by. Without that, they are just recycling stuff from outside and putting it out there again." However, he congratulates the new breed of young actors who are ready to experiment and give their all to their work and admits that change is round the corner in subjects, too. "I just hope these youngsters don't start playing safe and stick to doing mass entertainers in time."

In both his films, there has been a conscious decision to work with unknown faces from theatre and not-so-well-known musicians. This, he says, is to make the experience baggage-free for the audience. "I want to see the characters in my films fresh. I like to create them. I don't like falling back upon an existing image an actor has," he says. "For instance, the father's character in NSL could have been played by someone like Siddique. But the problem is that Siddique has been doing this for years and those who are watching it know exactly what he will do next. I don't like that sort of anticipation in the audience, which is why I try to use newer people."

Rajeev, who is also planning a project with Dulquer Salman on the history of Ernakulam, says that he sees cinematography and direction as extensions of the same process. However, to be good in both, practice is the key thing. "It is like writing," he says. "Like our handwriting improves as we keep writing, in time, our thoughts may also improve." As a cinematographer, there is always the director to fall back upon, says Rajeev.

"But direction is entirely different. You are the man with the vision and you have to look after everything. You have to inspire people," he says. "Everyone else is a technician and a part of the team, without whose contributions the film cannot be made. It all depends on the filmmaker and how he extracts those contributions. “Sharing my vision with people and trying to get stuff out of them is an interesting process."