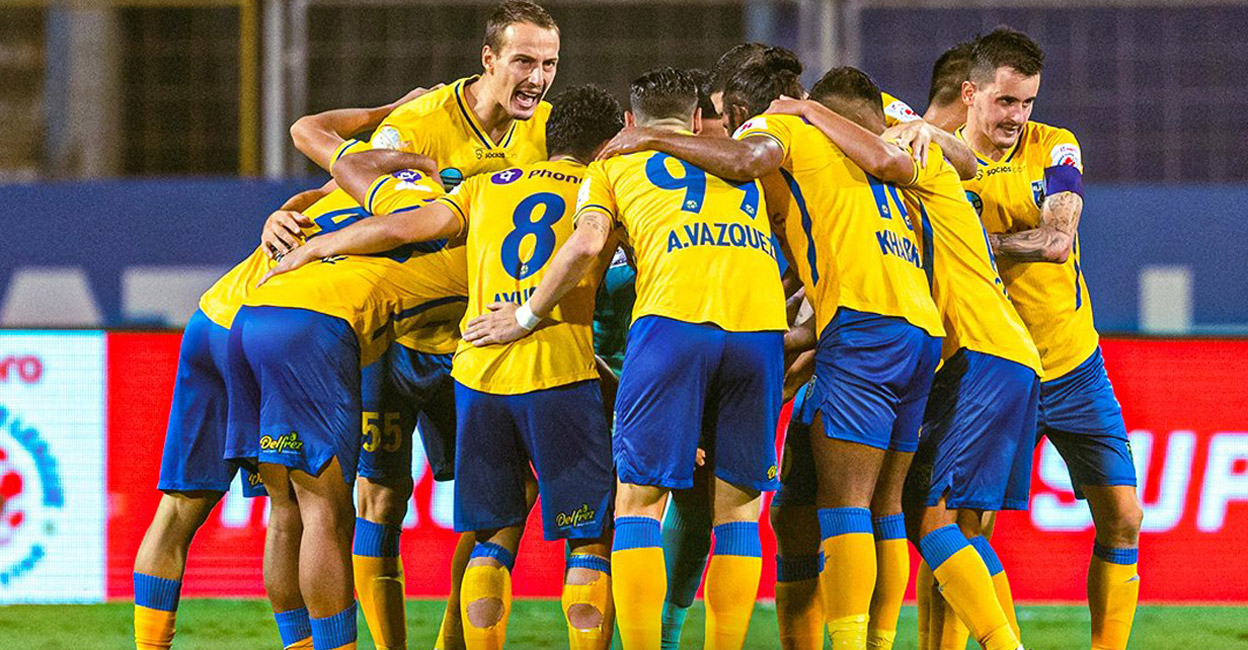 Hello, hello, hello.... what a Sunday do we have on our hands...it's going to be electrifying, thrilling, exhilarating..boy I'm running out of synonyms to label my excitement. Tonight, Kerala will bleed yellow and like every other true-bred Malayali, we at Onmanorama can't wait to see our Manjapada bring that cup home. While we've got a few more hours to kill before the final battle, which is also a south derby, gets under way, let's take a quick look at one of the most celebrated teams of the Indian Super League, the Kerala Blasters FC. I'm your host Vishnu and welcome to a special podcast episode on the Blasters' journey through this edition of the ISL.

From their very first season, Kerala Blasters have made a huge impact on Indian football. After being the runner’s up in 2014 and 2016, Kerala Blasters FC will play their third final today against Hyderabad FC. Either way, the ISL will get a new champion this time. And ofcourse, our fingers are crossed for the Kerala Blasters. Finishing fourth in the points table and qualifying for the semi-finals after eliminating Mumbai City FC in the league phase of the season, KBFC head coach Ivan Vukomanovic, who is already a fan favourite amongst the Kerala Blasters FC followers, guided his team to their first-ever semi-final finish since 2016. From losing their opening match to arch-rivals ATK Mohun Bagan to making it to the top four, Kerala Blasters FC have come a long way.

So, things didn’t go as planned for the Blasters as their season opener against ATK Mohun Bagan turned out to be a big blow. The Mariners, under then head coach Antonio Habas, dominated the game from the word go and found the back of the net thrice in the first half. Vukomanovic’s men couldn’t handle the pacey attack and were outnumbered in the game which ended as a 2-4 defeat.

After a series of three draws and one loss in the following four games, Kerala Blasters were up against Mumbai City FC, who at the time were on a roll with a 4-game winning streak and had lost only one game in their last six matches. With the help of Sahal Abdul Samad, Alvaro Vazquez, and Jorge Diaz, KBFC ended the Islanders’ winning streak with a resounding 3-0 victory and set the course for the season ahead.

Climbing to the top of the table in the previous game alongside on a 10-game unbeaten run, Kerala Blasters FC were brought down by Bengaluru FC in a 1-0 loss, denting their position in the league table.

Getting so close to registering their first-ever ISL win over ATK Mohun Bagan, the Blasters’ 2-1 lead was spoiled by an injury time equaliser from Joni Kauko. An end-to-end game between both sides, Luna put his side ahead in the seventh minute, but the Mariners’ David Williams responded quickly by scoring an equaliser in the next minute. Luna, again, scored a scrumptious goal to put his side ahead, and all was said and done before the referee handed out a red card to each side - Jorge Pereyra Diaz and Prabir Das. Within no time, Joni Kauko came out of nowhere to equalise in stoppage time. Arguably one of the best games of the tournament.

Needing a win to nearly secure the semi-final spot, this game witnessed a historic win as not only did Kerala Blasters FC seal their berth in the semi-finals but also completed the league double over Mumbai City FC for the first time ever in Hero ISL. Sahal Samad handed his side the lead at half-time followed by goals from Alvaro Vazquez, and a Diego Mauricio consolation penalty goal.

Facing Jamshedpur FC in the semi-final, Vukomanovic’s men were winless against the Men of Steel in the league phase of the season and faced an uphill battle as the Owen Coyle side were recently crowned as the League Winners and were on a 7-game winning streak. The first leg saw a cheeky little chip from Sahal Samad after a shabby headed clearance from Jamshedpur FC defender Ricky Lallawmawma being the differentiator as both sides held onto their goal.

A draw or a win meant a job done for Vukomanovic’s men in the second leg. The Blasters’ wizard Adrian Luna came to the rescue yet again with a sublime finish in the 18th minute to put his team first. The Men of Steel pulled one back through Pronay Halder in the 50th minute but it didn’t suffice through the 90 minutes, meaning Kerala Blasters FC found themselves in the Hero ISL Final after a wait of six years.

So here waits an entire State with bated breath to see a team, that has become an emotion, hold that shield up high. Let this be the year the name Kerala is engraved onto the ISL trophy. Here's wishing the team all the very best for a thrilling final. This is your host Vishnu and see you all on the other side.