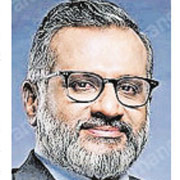 We are in unprecedented times. The COVID-19 pandemic is spreading across the world and India is no exception. COVID-19 has spread in 206 countries, infected more than 13,00,000 people and claimed 74,000 lives.

The lockdown of nearly 130 crore people and a large number of businesses is leading to disruptions and dislocations on a scale never imagined.

It has slammed the brakes on economic activity and caused enormous human suffering. And we may be in early stages of the pandemic yet.

In just two months the world economy has been turned upside down. Stock markets have collapsed by a third and in many countries factories, airports, offices, schools and shops have been closed to try to contain the virus.

Workers are worried about their jobs and investors fear companies will default on their debts.

All this points to one of the sharpest economic contractions in modern times.

India’s real GDP decelerated to its lowest in over six years in Q3 2019-20, and the outbreak of the COVID-19 posed fresh challenges.

Gross Domestic Product (GDP) growth for fiscal 2021 was pegged at 6% by the Reserve Bank of India on February 6, and by CRISIL at 5.2%. CRISIL has since revised its rating 170 basis points lower to 3.5%, while the RBI, in its monetary policy meeting in March, decided not to provide an outlook on GDP growth!

On April 3, Fitch Ratings slashed India's growth forecast for the current fiscal to a 30-year low of 2%, from 5.1% projected earlier. Crude oil is down 64%, while the rupee is trading 6% lower compared with the dollar.

MSMEs are likely to be the biggest losers. These companies are too small to have enough of a cushion to last through a pandemic like this one and cannot survive a prolonged shutdown.

The MSME sector contributes 29% to India’s GDP, provides employment to more than 120 million and contributed 48.1% to India’s total exports in 2018-19.

Kerala has the 12th largest number of MSMEs in India - around 2.4 million units generating employment for approximately 4.5 million. Kerala has about 44% of its labour force as casual workers in the informal sector.

Also, about 3.5 million migrant labourers are operating as casual workers; 0.7 million workers are factory employees. As many as 3.1 per cent of Kerala’s population works in fishing and allied sectors. They reside in 222 marine fishing villages and 113 inland fishing villages of the state.

The fish worker population of the state in 2016-17 is estimated at 1.03 million. The informal daily wage earners have lost their jobs and incomes.

Around 3 million Keralites are working abroad, mainly in middle east and a large percentage of them belong to lower- or middle-income group. Remittances contribute nearly 36.5% to the net state domestic product.

The impending recession and oil price slump will impact many of these jobs, thereby remittances and moreover, most of these non-residents will move back to Kerala post-coronavirus.

The collapse of the economy brought about by the coronavirus pandemic has exposed the extreme vulnerabilities of millions of informal workers, who are disproportionately employed in industries undergoing mass lay-offs as well as high-risk jobs that keep society running, when many of us are isolated at home.

Many of the undocumented, working in construction, restaurants and other service sectors, have already lost their jobs.

The service sectors of the economy are feeling the coronavirus outbreak hard, and it's often migrant workers who are bearing the brunt. Unlike many other formal workers, undocumented migrants can’t count on the social safety net if they lose their jobs or get sick.

Most do not have health insurance or access to paid sick leave — putting them and the people they encounter at risk.

Most aren’t eligible for the cash payments included in the relief package announced last month.

Though enough food and supplies were provided to them, the upheaval seen in few states recently clearly shows they don’t trust the government and the system.

Another sector which has been terribly affected is tourism and hospitality. Tourism constitutes 10 per cent of Kerala’s GDP, as per official statistics, and reportedly contributes around 23.5 per cent to the total employment in the state.

One relief was that the pandemic outbreak happened towards the fag end of the tourist season.

However, the revival of the industry is going to take time.

Anybody who makes firm predictions now of anything, be it the final count of people getting affected, or about the economic impact of COVID-19 is a bit knave.

With the worldwide spread of the coronavirus, we have also entered a zone of fake news and chronic uncertainty.

That’s where we are now. We still don’t have enough reliable information to form sensible judgments about where this is ultimately heading.

The first stimulus, before any economic stimulus, is to contain the spread of the virus, which I believe we have acted promptly than any other country.

All appreciation to our Honourable Prime Minister. Our Chief Minister has handled this well -– our state has become resilient after a series of disasters from the 2018 floods to Nipah to now COVID-19.

He had the foresight to initiate a partial lockdown even before many other states did.

Our Health Minister, who is working day and night to fight this epidemic, can boast of a Kerala model to fight epidemics.

This is being discussed and written in international media.

All kudos to our doctors, paramedics and health officials, who have fought multiple battles to reach here.

Now, the time has come to look at, what next.

It is time to assess the economic aftermath of this lockdown and think about ways to minimize the related damages to people, households and businesses.

We have to come out with an economic plan to target the different affected groups: the households,the daily wage earners, the MSMEs and the large businesses.

And it needs to be fast, efficient and flexible, so that if the virus retreats only to resurge any time, workers and firms can be confident that government will provide assistance again, as needed.

Our immediate aim should be to protect the most vulnerable people, like the daily wage workers who have lost their jobs and incomes.

There should be a generous cash payment to these informal workers. Cash has to be be distributed fast. This is not the time to hold back generosity. Households will be confident enough to spend when conditions improve.

And firms will keep their workforces and plants intact, ready to get back to action when this dark episode has passed. But spending is also needed to discourage lay-offs at firms running far below capacity, by subsidizing workers’ wages.

In this context, CII is conducting a survey to understand the economic implications of COVID-19. The survey will focus on:

Current impact of COVID-19 : The study will be based on primary research wherein CII will approach leading industrialists and sector specific chambers to understand the economic impact of COVID-19. The key sectors that will fall under the survey will be Food Processing, Ayurveda, Agriculture, Tourism, MSME, Healthcare and Financial Sector. The survey will also identify the Long term and short-term repercussions of COVID-19.

Changing demands of business & business continuity plan post COVID-19: The survey will help the industry to explore the alternate revenue models. Beyond immediate actions, organizations/government should use this as an opportunity to reflect on the ability to navigate a crisis and going forward, consider actions to increase agility and become more resilient in the future.

There should be a special package for the Nano enterprises and MSMEs, something similar to the Small Business Disaster Loan and the Paycheck Protection Program announced in the US. The program provides small businesses with funds to meet the ordinary and necessary operating expenses and pay up to 8 weeks of payroll costs.

The next priority is to get cash to the larger businesses. Its failure would damage the economy's potential. They face a cash drought even as bills fall due. Banks and bond markets are closed to many of them. Mass defaults would fuel unemployment and bad debts at banks and make it harder for commercial activity to rebound. The Reserve bank has intervened, with measures to provide liquidity to banks and three months moratorium for borrowers; but this is not enough. Banks should lent liberally to corporates and subscribe to their bonds.

Many of the above mentioned interventions need resources for the state and central government and there is an urgent need to find novel ways to mobilize resources. Fortunately, history provides a template for how to raise resources/conduct corporate bailouts in times of acute stress. There are few proven models from the Great Depression to the 2008 Global meltdown.

Using the Depression-era Reconstruction Finance Corporation (RFC) model, we should set up something similar to provide assistance to stricken sectors like MSMEs, Hospitality and Airlines to revive their businesses.

Assistance can be in the form of quasi equity or long term loans say with a 20-25 years tenure.

The RFC has to be established as a quasi-independent central or state agency of the World Bank.

It can be overseen by a Board of Directors from RBI, World Bank and Industry. Its success will depend on four things-Independence, Leverage, Leadership and Equity.

If we don’t act in time, we also have to decide which businesses to fail.

(The author is group chairman and managing director of Muthoot Fincorp)