Fundraiser for candidate Ramya Haridas has no political overtones

Kozhikode: Ramya Haridas, the young Congress candidate from Alathur reserved seat in Kerala, has a challenging role in the Lok Sabha election. Her party has fielded her to take on CPM's P K Biju, the incumbent MP who has already won from the constituency both in 2009 and 2014. Considering Ramya's profile, a public campaign to fund her campaign has been launched. A former UN official, who spearheaded a fundraiser for the victims of Kerala floods last year, has launched a crowdfunding drive for Ramya.

Both Ramya and Biju are from the Scheduled Caste community and the Alathur constituency is reserved for candidates from this background. Ramya, who is currently Kunnamangalam block panchayat president, is unlikely to match up to resourceful politicians in garnering funds required to run a poll campaign for nearly a month.

John Samuel, a former director of United Nations Development Programme, himself donated Rs 25,000 for Ramya as part of the ambitious campaign he has launched on social media. 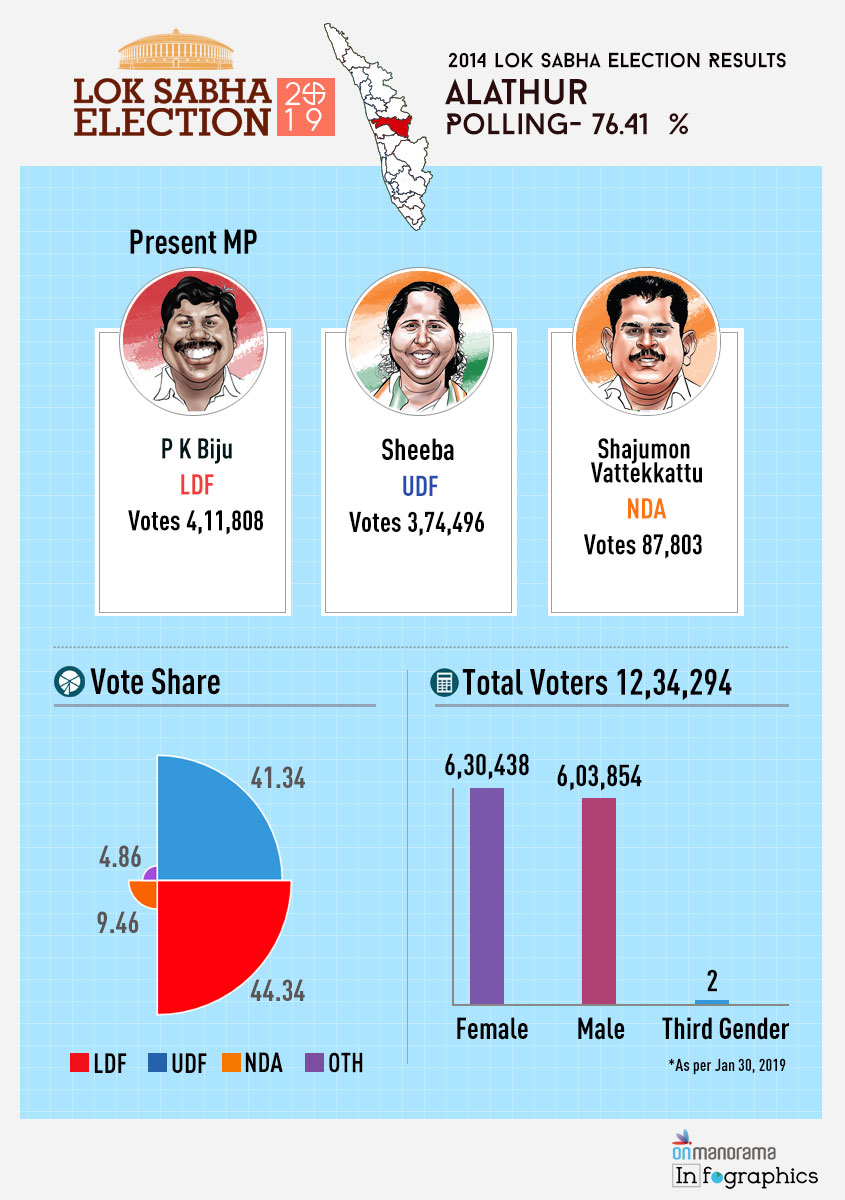 Samuel explains about the campaign named 'Ramya Haridas Challenge Fund': “If you want candidates from economically and socially backward sections to reach Parliament without the support of the rich, contribute to their election fund. I will give Rs 25,000 to the election fund of Ramya Haridas. Those who are willing to contribute, be it  Rs 100, Rs 1000 or Rs 10,000, put a comment here or let me know in a message. Their party affiliation doesn't matter. In Kerala, Ramya could be the first woman leader who rose to the top from the lowest strata of society only by her hard work. Hence her entry to Parliament would script history,” he wrote on his Facebook page.

Those who are wiling to support Ramya have been asked to mention on the page the amount they were planning to donate. Ramya's bank account details would be announced later. Samuel said that the decision to support Ramya was not based on her party or the political front (UDF), but as a support for the individual and her leadership capabilities.

“The Ramya Haridas Challenge Fund is about showing solidarity with the candidate and not sympathising with her. I am not collecting fund for her from anyone. Showing solidarity with one particular candidate does not mean that I am against her opposition candidate. PK Biju is a candidate with integrity. He got the chance to be in the Parliament for 10 years,” Samuel said.

Ramya came to the limelight when she was elected as the block panchayat president in Kunnamangalam in Kozhikode district. The 32-year-old is noted for her unique ways of public interaction. More than the speeches, she switches to folk songs and film songs and her own parodies to present a situation, easily gain applause from the public.

Voters in Kerala are set to cast their votes on April 23.

Tags:
MORE IN KERALA
LOAD MORE
The comments posted here/below/in the given space are not on behalf of Onmanorama. The person posting the comment will be in sole ownership of its responsibility. According to the central government's IT rules, obscene or offensive statement made against a person, religion, community or nation is a punishable offense, and legal action would be taken against people who indulge in such activities.
https-www-onmanorama-com-news-kerala https-www-onmanorama-com-acp 63tcmatjtcl183t7ck07qo52ns 4sevvvh9oec4jshvh529ainrj onmanorama-topic-destination-5-kozhikode