Why Kerala is crucial for all political fronts

Kerala is in the throes of a heated general election campaign, but a single issue is yet to dominate political circles. The Periya twin murders could not have come at a worst time for the Left Democratic Front but the ruling alliance seems to have regained the upper hand by fielding its candidates early and starting the campaign ahead of its competitors.

The Congress and the United Democratic Front had gone through a period of uncertainty regarding the selection of candidates but the final list seems to have patched up all differences. The choice of K Muraleedharan as a candidate in Vadakara stole the show.

The BJP's trump card for Thiruvananthapuram was Mizoram Governor Kummanam Rajasekharan. The National Democratic Alliance hopes to tide over the stumbling blocks through a series of high-profile visits including that of Prime Minister Narendra Modi.

Chief Minister Pinarayi Vijayan is expected to personally lead the LDF campaign. Pinarayi and CPM secretary Kodiyeri Balakrishnan are learned to have picked 10 constituencies each to personally monitor the campaign.

Both leaders have told the cadre to buck up to avoid repeating the mistakes in the previous Lok Sabha and assembly elections. The party had failed to get its own members to vote in many constituencies. Party squads in charge of house visits were found wanting in their work. Senior leaders and booth secretaries paid no heed to a party order to visit houses to seek votes. 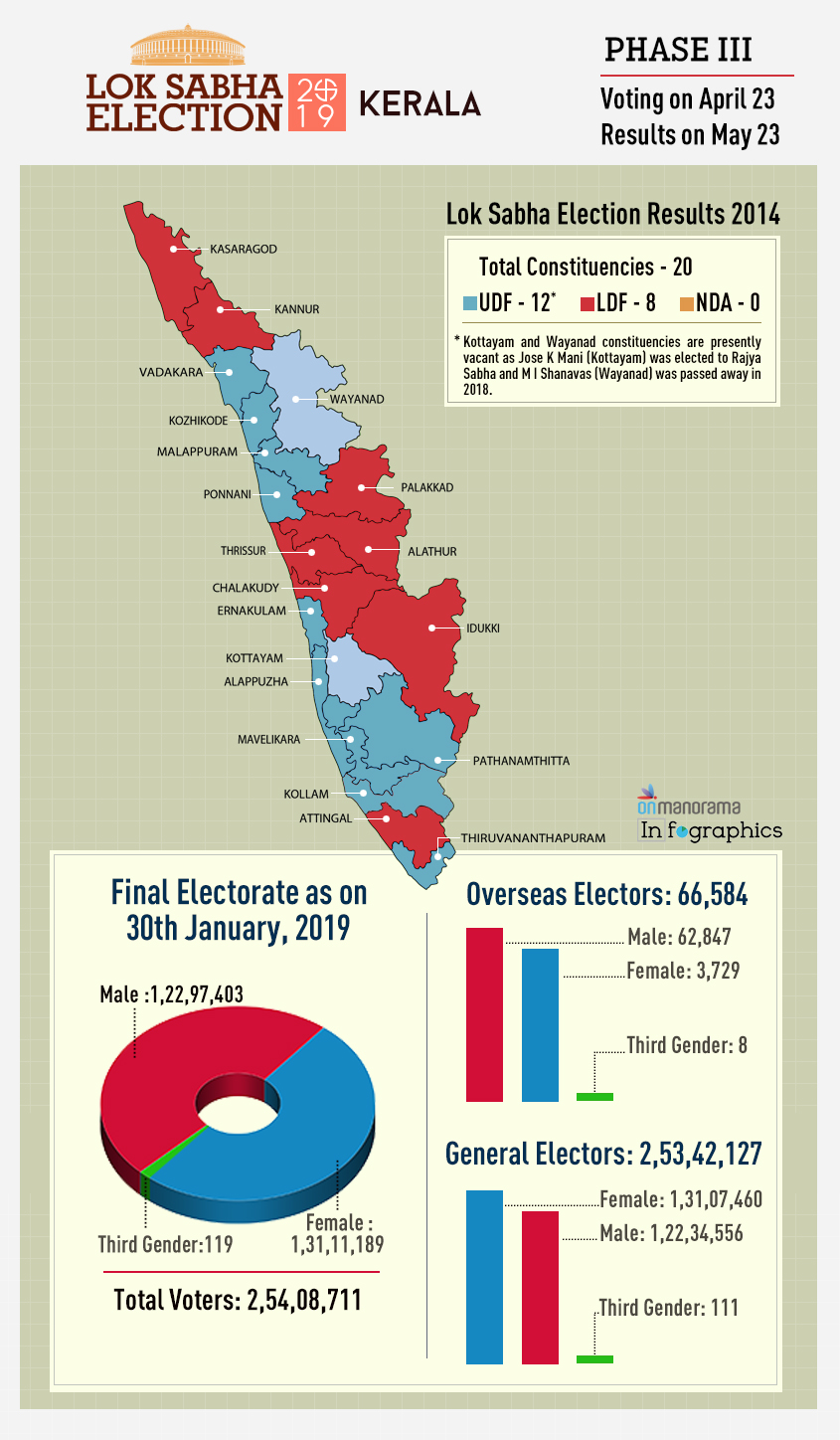 The LDF has a clear agenda this time: Maximum votes, maximum seats. Though the front won power in the state with 91 seats in 2016, its vote share declined by 1.78 per cent from 2011, when it lost power to the Congress-led UDF. Though votes increased, the vote share fell. The front wants to improve on both counts this time. The CPM has to win as many votes and seats in Kerala if it were to retain its status as a national party. That explains why the party has decided to back only two independents this time, compared to five in 2014. Even Innocent has been assigned the party symbol this time.

The LDF leadership had directed the cadre not to be distracted by the feuds in the opposition camp over the candidate selection. However, the alliance is surprised by the denial of a seat for K V Thomas in Ernakulam and the choice of K Muraleedharan in Vadakara and Rajmohan Unnithan in Kasaragod.

All eyes on Kerala

The UDF camp is confident about a good show since it has ironed out all differences and fielded candidates for all seats. The coalition, still smarting from the rout of 2016, has to make it big to stay relevant in Kerala politics.

Congress president Rahul Gandhi told party leaders in Kerala during a two-day visit to the state that he counts Kerala among the states to win the most seats for the party. A survey commissioned by the AICC reflected other opinion poll results that the Congress had an upper hand in Kerala.

Rahul Gandhi's campaign in the Malabar region had eager takers in the Muslim League. The Congress is not worried about minority votes. Though it is concerned about the BJP's increasing command over the majority votes, it expects to earn those votes on an anti-incumbency wave.

The UDF stooped to a shocking low in the previous assembly election. At 38.79 per cent, the UDF vote share was the worst in the previous four elections since 2011. The vote share amounted to a slide of 7.24 per cent from 2011. The conditions that led to the rout would have to be overcome if the survey results were to come out right.

The BJP organisation work is going smooth despite the tussles related to the selection of candidates. Though RSS leaders have a major say in the selection of BJP candidates, the cadre is not the least bothered about the details. Their organisational network is working like a well-oiled machinery right up to the grass-roots level. The NDA had added 9,12,333 more votes to its kitty in 2016 than in the 2014 general election.

The coalition is working towards increasing the vote share in Kerala to at least 20 per cent. That could translate into winning one or two seats. All these preliminary estimates and assessments are subject to change as more drama unfolds.