Can Arif do a Venugopal? Alappuzha campaign heats up

The Alappuzha Lok Sabha constituency is hardly hundred kilometers long. The stretch of land, however, is rich in history and political legacy. Alappuzha has always frustrated political strategists who tried to apply easy equations on it. One of the worst-affected by last year’s floods, Alappuzha is peculiar in this election.

Alappuzha hogged limelight ahead of the general elections by an absence. When Congress' sitting MP K C Venugopal said he would not be running for another term, poll pundits were busy speculating on the other options. The United Democratic Front finally settled on Shanimol Usman.

The Left Democratic Front, however, had already secured a lead in campaigning. CPM has fielded Aroor MLA A M Arif in the constituency.

The BJP-led National Democratic Alliance was in a curious situation. The Bharat Dharma Jana Sena did not want to contest in what could be considered its home turf. The BJP finally picked a former Congress sympathiser, Dr K S Radhakrishnan. 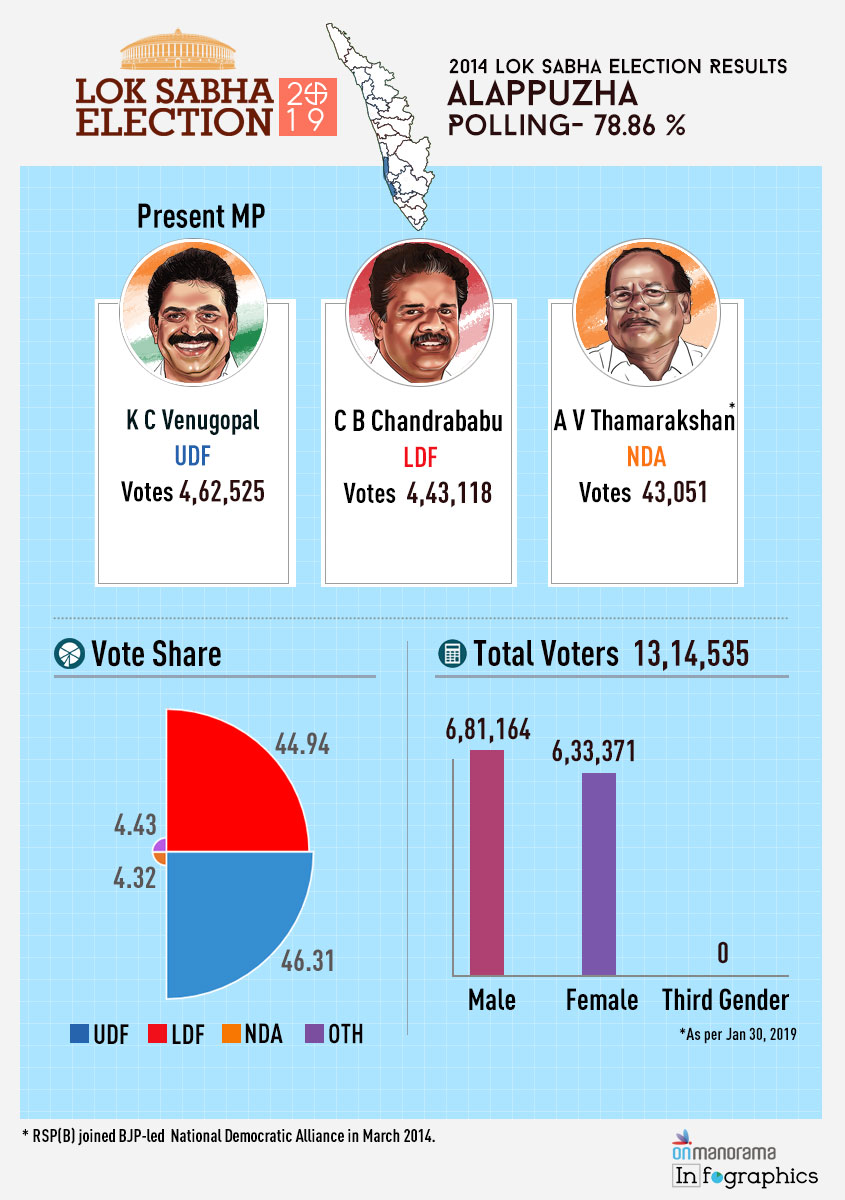 The Alappuzha Lok Sabha constituency consists of the six westernmost assembly segments in the Alappuzha district plus Karunagappally in the Kollam district. Venugopal won by about 20,000 votes in 2014. The senior leader stepped aside this time as he was laden with party responsibilities.

The UDF has focused its campaign on national politics, sharpening its attack on the NDA for its corrupt and communal stands. The campaign also centres on the development works by Venugopal and the allegations against the CPM stemming from the twin murders of Kasaragod. Also in focus is the agitation against women’s entry to the Sabarimala shrine.

Usman has been highlighting women’s issues such as sexual abuses and the insecurity faced by girls.

The UDF ridicules the LDF attempt to seek votes against the BJP but the CPM and allies counter this argument with the front’s record performance in 2004 when the Vajpayee government was swept off power. The Congress drew a blank in Kerala that year.

Arif makes it a point to underscore the development activities implemented by the LDF government in the state.

The NDA campaign attempts to drive home the point that Alappuzha lagged in development despite contributing chief ministers and Union ministers.

The three major candidates are facing their first election to the Lok Sabha. Arif has been elected to the Kerala Legislative Assembly three times. Usman has contested two assembly elections. Radhakrishnan is making his debut in active politics.

Venugopal was an MLA when he was chosen to contest the parliamentary election. Arif could follow a similar trajectory, the LDF expects.

All three fronts know well that political stands are not all when it comes to winning an election. Poll managers have been making a beeline to visit SNDP Yogam leader Vellappally Natesan in his house at Kanichukulangara and seek his support. The UDF is comparatively less confident of the community leader’s support.

Chief Minister Pinarayi Vijayan and CPM state secretary Kodiyeri Balakrishnan have visited Vellappally. So did BJP leader Kummanam Rajasekharan. Vellappally seems to be gunning for the LDF though the party led by his son is a BJP ally. Leaders are also busy visiting the NSS headquarters at Changanassery.

Though communists hails Alappuzha as a hotbed of revolutionary activities including the Punnapra and Vayalar rebellions, they have won only seven of the total 16 parliamentary elections. The undivided CPI won twice and the CPM five times. They lost to the Congress eight times and to the RSP once.

The latest figures are encouraging though. The LDF won six of the seven assembly segments in the Lok Sabha constituency in 2016 assembly election.

The UDF is hopeful of guarding the constituency even though they lack a candidate with the stature of Venugopal. Usman has found solid support among party workers thanks to her local roots.

The LDF, on the other hand, is relieved that Venugopal is out of the picture. The CPM wanted to defeat the senior Congress leader at any cost. They had formed strategies accordingly. Now they think that their job has been made easier.