Despite stringent measures, local transmission continues unabated in several regions - especially in Thiruvananthapuram and Ernakulam districts. Of the new cases, 528 had contracted the virus through contact. The source of infection is unknown in 34 cases.

One COVID death too was reported in the state on Tuesday. The deceased has been identified as Victoria (72) hailing from Pulluvila in Thiruvananthapuram district.

Kerala is more prone to the spread of the pandemic due to its population density and a higher ratio of elderly population compared to other Indian states, Chief Minister Pinarayi Vijayan said at his daily press conference to brief COVID-19 scenario on Tuesday. "Yet, the state has recorded a low death rate so far," he said.

The COVID-19 fatality rate in Kerala is still at 0.33 per cent, Vijayan said. "This is in part due to the selfless efforts of our healthworkers and the many initiatives that we have taken to combat the disease from the very beginning," he said.

Kerala is the only state that traces secondary contacts of COVID-19 patients, Vijayan said.

On Tuesday, 5,022 persons were charged for not wearing masks. Cases have been registered against nine people for violating quarantine norms.

Eighty two of the patients came from abroad and 54 from other states. 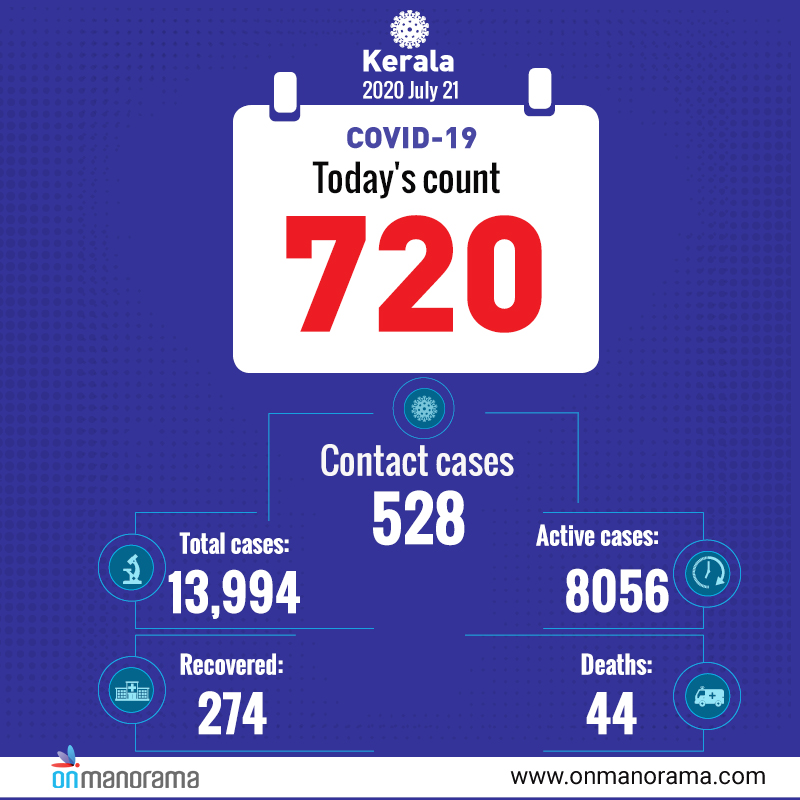 528 had contracted the virus through contact. They include 144 from Thiruvananthapuram, 79 from Kollam, 72 from Ernakulam, 36 each from Palakkad and Kasaragod, 35 from Kottayam, 33 from Kozhikode, 30 from Alappuzha, 29 from Malappuram, 21 each from Pathanamthitta and Wayanad, five from Kannur, and two from Thrissur.

Seventeen healthworkers have also contracted the disease, Vijayan said. They include five from Kannur, three each from Thiruvananthapuram and Ernakulam, two from Kollam, and one each from Thrissur, Kozhikode, Wayanad and Kasaragod districts. 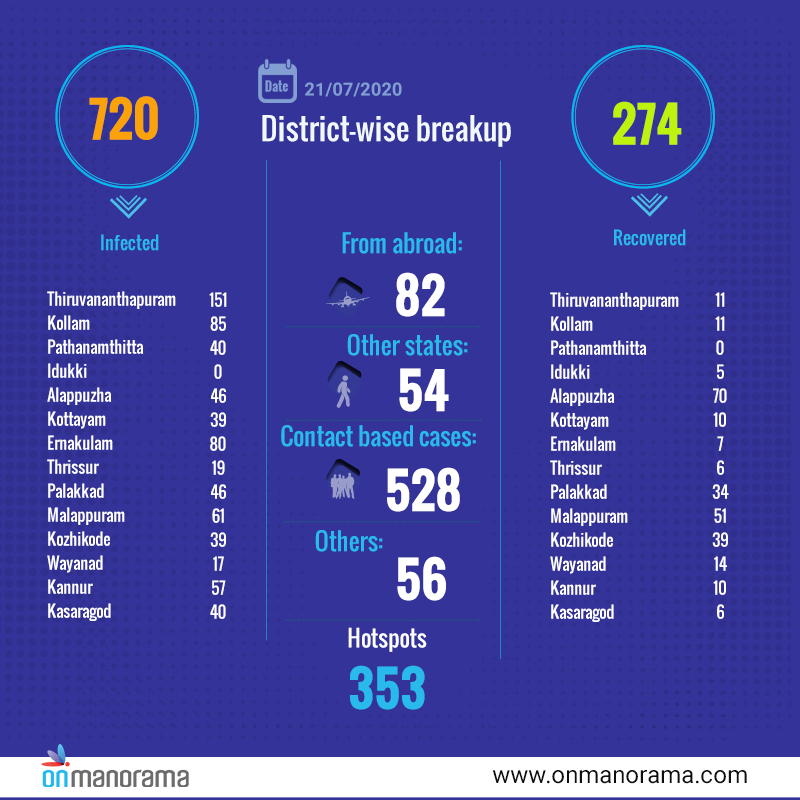 274 persons were cured of the disease on Tuesday.

With this, 5,892 in the state have been cured of the disease.

On Tuesday, 984 people were admitted in hospitals.

As part of Sentinel Surveillance, 1,90,047 samples were collected from priority groups, such as health workers, guest workers, social contacts. Of them, 96,544 have returned negative.

Eighty more COVID-19 cases were confirmed in Ernakulam district on Tuesday, taking the tally of active cases in the district to 913. Of the 80 cases, 75 were infected through local transmission.

Eleven more cases were reported from the Keezhmadu cluster while 12 tested positive in the Aluva cluster. Four contracted the virus in the Chellanam cluster.

With the cases rising in the coastal area of Chellanam, a first line treatment centre has been set up at the parish hall of Kannamali St Antony's church. Fifty beds have been arranged there.

The cases without identified source include fish vendors in Nilambur market, a driver of Nilambur district hospital, a bakery owner at Peruvalloor and three volunteers of a trauma care facility -- two natives of Cheriyamundam and one from Thirunavaya.

In Alappuzha, 46 people tested positive. Of them, 30 contracted the disease through contact. The cases through local transmission include seven Kayamkulam natives who probably got the virus from Kayamkulam market. Eight Kalavoor natives who were in the contact list of a female staffer of a private lab at Chettikad also tested positive.

Forty cases were confirmed in Pathanamthitta. Of them, 21 are contact cases. Source of infection has not been identified in two natives of Kuttappuzha and Tiruvalla. Both of them are fish vendors.

Kozhikode has a similar situation. Of the 39 new cases, 34 are contact cases. Source of infection is not known in four cases.

In Kottayam, 39 more tested positive. Of them, 35 contracted the disease through contact. Sixteen people tested positive in the rapid antigen tests conducted in Changanassery market.

The six regions excluded from the hotspots list are: Edakkara (3, 4, 5) and Vazhikkadavu (21) in Malappuram district, Kollengode (2) and Sreekrishnapuram (2) in Palakkad district, Meppadi (19, 22) in Wayanad district, and Neeleswaram municipality (5, 22) in Kasaragod district.

There are currently 353 hotspots in the state.

COVID-19 First Line Treatment Centres (CFLTC) are being set up under the local governing bodies across the state in the wake of rapid spread of the disease.

As of July 17, a total of 20,404 beds have been prepared in 187 CFLTCs across the state. Over 300 doctors, 575 nurses, 27 lab technicians and pharmacists have been deployed in these centres.

The centres will be augmented with ambulance facilities.

Those who have tested positive during the Antigen tests will be admitted to CFLTCs. They will be allowed to leave the centres once they test negative.

In addition to this, there are 59 centers in the government sector and 51 in the private sector.

• There are 101 active clusters in Kerala now. Of this, 18 are large community clusters.

• A 24-hour control room has begun operation in the state to answer the concerns of the public.

MORE IN KERALA
LOAD MORE
The comments posted here/below/in the given space are not on behalf of Onmanorama. The person posting the comment will be in sole ownership of its responsibility. According to the central government's IT rules, obscene or offensive statement made against a person, religion, community or nation is a punishable offense, and legal action would be taken against people who indulge in such activities.
https-www-onmanorama-com-news-kerala 786uq1m44lfp5da4l62cm745hg https-www-onmanorama-com-acp