As the 9km Atal gets inaugurated, Malayalis wonder about a 945m tunnel

When Prime Minister Narendra Modi inaugurated the Atal tunnel, the world's longest highway tunnel to be constructed at an altitude of 10,000 feet above sea-level, on Saturday, Malayalis couldn't help but think about the one under construction at Kuthiran. 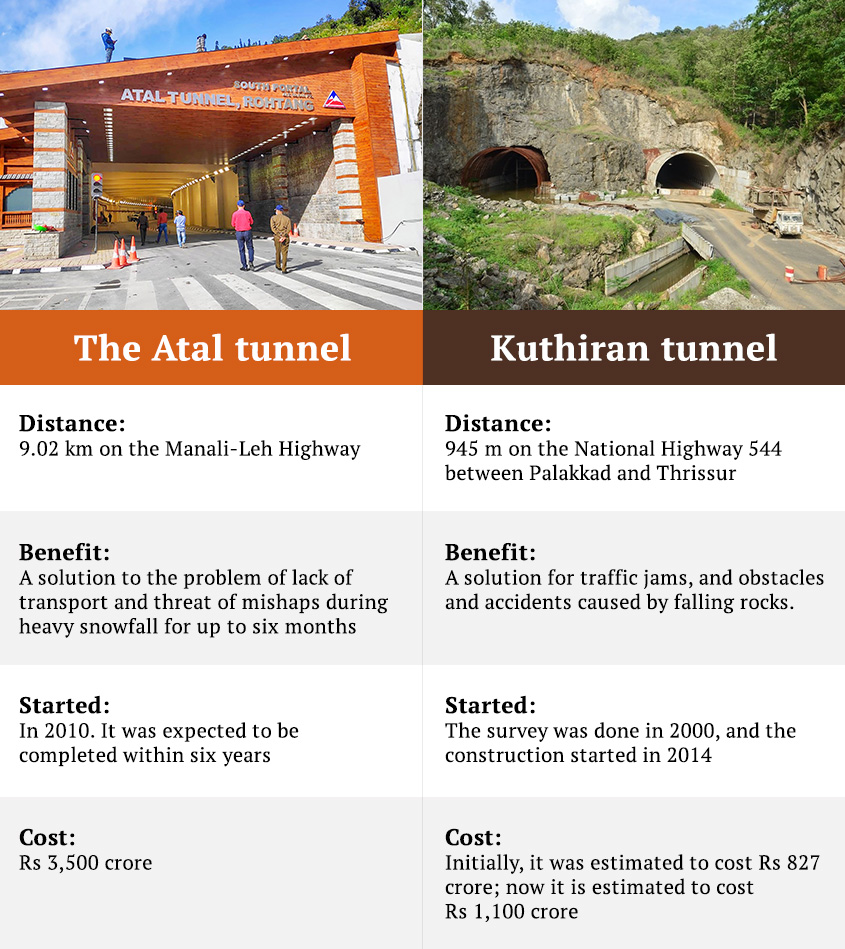 Here is the tunnel's current status and how it compares with Atal.

The state government had said that the Kuthiran tunnel would be completed by December 31, 2019. The deadline was later moved to March 31, 2020. Then came the COVID-19 lockdown. There has been no work on the tunnel for 10 months now.

The main problem is said to be the financial crisis the construction company is facing.

The sub-contractor appointed for the construction of the tunnel abandoned the project due to a dispute with the main contracting company over the amount it should be paid.

Countless meetings chaired by Union ministers, MPs, MLAs and panchayat presidents were held but the many promises made could not be fulfilled. The state government has been blaming the construction company and the National Highways Authority of India (NHAI) for the project's delay.

But while the NHAI says the financial crisis of the construction company is responsible for the current state of affairs, the company says the delay in getting various permits from the forest department, workers' strike and the protests of the people with various demands have been affecting the project.

The company said more forest land is required for the tunnel. It has applied for extra land. The consent of the forest department is also required to remove rocks and soil from the tunnel area.

The status of Kuthiran tunnel now

The two tunnels at Kuthiran are 14m wide and 10m high each. Ninety per cent of the work on one tunnel and 60 per cent of the second tunnel have been completed. So far, construction has been halted more than 20 times for various reasons. During the monsoon, small springs burst out from different parts of the tunnel.

There is no drainage system as yet as the construction of the sewer has not been completed. Electrical, fire safety and lighting systems have to be completed. Facilities for air-circulation and air-conditioning are required. The faces of the tunnels are under the threat of landslides. When the monsoon is intense, there is a possibility of strong landslides.

Tags:
Advertisement
MORE IN PALAKKAD
SHOW MORE
The comments posted here/below/in the given space are not on behalf of Onmanorama. The person posting the comment will be in sole ownership of its responsibility. According to the central government's IT rules, obscene or offensive statement made against a person, religion, community or nation is a punishable offense, and legal action would be taken against people who indulge in such activities.
RELATED STORIES
Subscribe Newsletter