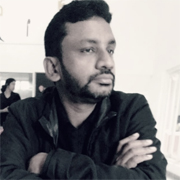 It has been a season where no script has gone the way it is meant to.

Mahesh Narayanan’s multi-crore Malik, starring Fahadh Faasil, was set for release last Vishu, but what he is launching this Onam is CU Soon, a 90-minute thriller wrapped up in 18 days, shot with multiple digital tools, with a 67-page screenplay.

CU Soon, in Mahesh’s own words, is his work-from-home film, perhaps the first Malayalam film to be bracketed so.

Is it the proverbial ‘make-hay-while-sun-shines’ situation? “Not exactly,” says Mahesh Narayanan, the writer-director of CU Soon, the first screen-based feature Malayalam film exclusively shot for an OTT platform, produced by Fahadh.

Screen-based films are entirely captured on mobile or digital screens, be it the visuals or even the plot.

“There are multiple factors at stake, including subsistence,” says the film-maker who made a stellar debut through the 2017 flick Take Off.

What started as a small idea — something like a YouTube video — has turned out to be a path-breaking project, which has now become the talking point of the country itself.

Mahesh always wanted to make a screen-based film, but thought India was not ready for the experiment.

“Frankly, it was an idea that struck me even before the lockdown. A screen-based film has been a thread I have been toying with since the world started experimenting with such a format. Maybe, as early as 2013. I always looked up to such films and, let me tell you, those were inspirational.  But I knew we, as an audience, are not ready for such experiments. That’s when a virus invaded our lives and the subsequent lockdown happened.  Suddenly, be it online education or healthcare or even entertainment, everything has trickled down to our mobile screen. During a conversation when nothing productive was happening, it was Fahadh who initiated the idea to do such a film now. With Fahadh’s backing, both as an actor and producer, I knew I could pull off what I want,” says Mahesh, who had associated himself with the actor twice earlier, in Take-Off and Malik.

Though Mahesh firmly believes people will return to theatres once the pandemic is over, he did not want to “sit idle” for a year or so.

“It is also about finding alternative revenue. Many people in the industry are suffering from depression and other hardships, mostly financial. Many have taken to wedding photography or related jobs and worse, some have even become daily-wage labourers. So if you don’t open up with whatever you can, then things will spiral out of control. An average film set in Malayalam employs around 150 people. So creating films for alternative platforms will give employment to at least 50 people,” says Mahesh.

When the government allowed shoots only with 50 people among other restrictions, Mahesh and Fahadh decided to experiment.

Given the crisis and uncertainty, the entire cast and crew were paid their salaries soon after the shoot, something which Fahadh, the producer, was very particular about.

Mahesh also recalls a “striking” conversation with Kamal Haasan even before the lockdown.

“Kamal sir clearly told me that this year is for survival. Let us survive with whatever content we have. Being the visionary he is, Kamal sir predicted the industry’s bloodbath even before the lockdown. As he said, it’s a more of a survival tactic,” says Mahesh.

The entire film was shot at Kochi at a quarantined place with all Covid-19 protocols in place. Initially, the plan was for a 30-minute movie, but it turned out to be a 90-minute feature film.

The trailer has been lapped up, but was it not a challenge to make viewers glued to a screen-based film for almost 1.5 hours?

“Yeah, I was thinking the same when I saw the huge response to the trailer. Let us see when people finally get to watch the film,” says Mahesh.

There are whispers on social media that CU Soon has a striking similarity with Searching, the 2018 film shot entirely on computer screens and smartphones.

“There are many screen-based films and I have been closely watching the format emerge, rather slowly. There are some really interesting films such as The Collingswood Story [the first screen-based film Mahesh watched], The Den, Unfriended, etc. This format is still evolving. To answer your question, there are no similarities at all, barring the format. Why most people point to Searching is because it’s the most popular film in that genre. By the way, they are planning a sequel for Searching as well,” says Mahesh.

The film is scheduled for release on Amazon Prime on September 1, a Tuesday.

So no Friday, oops, Tuesday jitters for him?

“I really don’t know. Maybe not. But I am curious to know about the response.  Frankly, we are still  worried about Malik and its box-office prospects. A lot of research and effort has gone into the film and we are all waiting for its release, though nobody knows when.

In these days of piracy, it’s a nightmare to keep a film in the cans for long. We have got calls from many international film festivals to have Malik premiered, but we are holding it for a theatrical release. So to wrap it up, CU Soon is our work-from-home film before we get back to normalcy,” says Mahesh.

What’s the funda behind the title ‘CU Soon’?   A hint of change in language/grammar?

“The title is multi-layered and obviously it’s the new-age chat text format. There is something else which you will see as a surprise while watching the film,” says Mahesh.

So will CU Soon open the floodgates for OTT-exclusive films in Malayalam?

Deviating viewers will return to theatres once we conquer the Coronavirus, says he.

One swallow does not make a summer. Perhaps, it only heralds the beginning of a new season.

(Correction: An earlier version of the story stated that the movie was shot in 20 days).