Ladoo review: A dessert of friendship and love 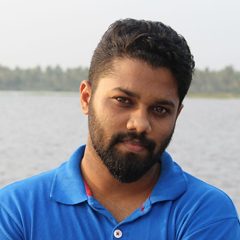 Arungeorge, who scripted the movie Masala Republic, in 2014 makes a comeback, albiet in a directorial role.

But then, when friends step in to help, chaos unfurls.

The crux of the story is about events that follow and how they deal with it.

Shabareesh entered Malayalam film industry as a lyricist through the movie Neram.

His self-styled performance as a singer-actor in Premam also won accolades. Shabareesh's character (SK) is a cheerful Allu Arjun fan. But this time he appears in a full fledged role.

Vinay Forrt and Balu Varghese are playing characters which they have dealt with often.

Manoj Guiness and Saju Navodaya aka Pashanam Shaji have impressed in their usual comic roles, where they have already proved their worth.

Gautham Shankar has left a mark with his variety camera angles and shots.

The music composed by Rajesh Murugesan and penned by the actor Sabareesh himself stand out. After Premam, this is the second Malayalam movie of the duo.

The vintage Omni van, reminiscent of the underworld movies of the 90s, makes a nostalgic comeback, this time to unite a couple.

Bobby Simha's cameo role is a treat to watch.

A love story woven with the plot of elopement and a chase is nothing new, but what makes this different is the classy narrative style.

It reflects youthfulness from the cast and crew in each frame, right from art direction to the song visualisation.