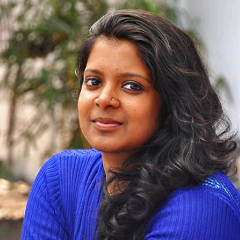 Dead have no place on the earth they say, but imagine a wandering soul connecting you in a certain way that you wouldn't even imagine. Ranjith Sankar's Pretham 2 is something near similar.

Five members from a Facebook film group called 'Cinema Praanthanmaar' meets up at Varikkassery Mana, the epic location of the Malayalam movie industry. Tapas (Amit Chakkalakkal), Niranjana (Saniya Iyappan), Anu (Durga Krishna), Ramanand (Sidharth Siva) and Jofin (Dain Davis) who have never known before are on a mission to complete a short-film at the Mana. What's special is that each of them are known by names of celebrities like Mohanlal, Shah Rukh Khan and so on in the group.

As expected, a series of untoward incidents welcome them, and they fall prey to the stories of the' Thampuran' ghost who still loiters around the Mana. In comes John Don Bosco (Jayasurya) the same old mentalist from Pretham 1. Now that our hero is here it's time for some deep analysis, and uncovering the past. Is it just the 'Thampuran' or somebody from within the group that's causing the trouble? Well, who is its target? Is the gang in trouble?

Pretham 2 invites you to uncover all this and we must say Ranjith Sankar's effort to conjure up a seemingly common plot to a never before attempted ending has borne fruit.

All five characters performed with ease doing justice to their respective roles. Jayasurya as a mentalist is his usual best, and once again proves that he can handle serious roles as well.

It seems the director has concentrated so much on the mentalist's costume, for Saritha Jayasurya's coutures are bold and loud on him.

Anand Madhusoodanan's background score is amazing, perfect for the mood. Being critical, Ranjith Sankar could have focused more on setting the climax, for a very engaging fun-filled first half slipped to a quick end.

While the idea of introducing a ghost very relatable to present generation seemed convincing, more details could have been added to its background story. The shortcoming of the movie lies in its somehow forced ending.

Pretham 2, will definitely entertain you for a one-time watch, the comic sequences, the unique ghost and Don Bosco's mentalist tricks will keep you hooked.