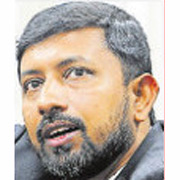 New Delhi: Under Armour Athlete Sufiya Khan, a world record setter for long-distance runs has now become the first female runner in the world to complete the run from Manali to Leh. Sufiya started her ultra-marathon

'Himalayan Ultra Run Expedition' on September 25, 2021, at 7.34 a.m. She concluded her run on October 1, 2021, covering a distance of 480 km in 156 hours, amid the difficult terrains and ruthless climatic conditions, reaching up to 5328 m altitude and gaining 8200 m elevation throughout the expedition. The temperature dipped between 0 to -5 degrees and oxygen plummeted by 60 per cent on mountain passes.

In 2018 Sufiya quit her airline job and started running as a means to relax and de-stress. She took part in multiple marathons and races. In the year 2018, she broke a national record by running the Golden Triangle -- 720 km -- in 16 days. In 2019, she made the record for the fastest time by a female runner in the "Kashmir to Kanyakumari" category and in April 2021 she became the fastest female to run along "The Indian Golden Quadrilateral Road". She currently holds multiple world records and continues to explore what her body is capable of. She credits a big part of her success to wearing the correct gear provided by the sports brand. She believes it has not only enhanced her performance but also safeguarded her from injuries along the way. For the run, themed 'Push Your Limits' both, Sufiya and Under Armour aimed to encourage athletes to push their limits, move out of their comfort zone and take up challenging tasks in their fitness journey. From everyday athletes to the world's best, the brand has been committed to equipping focused performers to strive and push their limits. After supporting Sufiya to power through her recording-breaking Kashmir to Kanyakumari run and Indian Golden Quadrilateral Run, the brand continued to contribute to Sufiya's constant pursuit to move beyond the ordinary and push her limits with her recently concluded Manali to Leh run.

Commenting on her impressive feat, Sufiya Khan said, "I trained myself in the mountains and lived there for 15 days to acclimatize myself to the extremely cold weather and low oxygen levels. Along with physical fitness, I focused on my mental fitness, which plays an important role when it comes to a run that is set to push one's limits. Under Armour has been a huge support in my journey throughout, and has helped me prepare for this run whether through its gear or encouragement. I am sure with this achievement both, Under Armour and I would be able to encourage more athletes to push their boundaries and unlock their potential."

A: test QA No training is enough to be ready to run on this route. It was not just a run but was also about survival. I acclimatized myself there for almost 15 days before the run. Apart from that, I focused on strength exercises during my training days to tackle the high mountains and never-ending incline roads. Yoga and Pranayama helped me make my lungs stronger. I had a very good support team with me taking care of my needs during this run. -- test