Gadgil, Kasturi who? Idukki farmers struggle to keep will to live

First came the deluge, and before they could breathe, the drought. Farmers in Idukki have been pushed over the brink.

Some have let go - already 13 farmers have committed suicide this year in the district - but most are holding on to their lives with what seems like vengeance. They say in the high ranges that they have to die to be heard. But those unwilling have found another way to make their voice count: vote.

Most people Onmanorama came across in central Idukki, the area that stretch between Vazhathope and Adimali where farm distress is the most severe, said they will vote. They said it so sharply that it sounded more like they were going to take up arms than just merely press their finger on the ballot box.

"Please don't ask me who I will vote for. But I will cast my vote," said Mary, the wife of Johnny Nellippuzha, a 65-year-old farmer who had committed suicide in January unable to bear his debts. "He just wanted a kitchen for our house and no one heard him," she said, holding back her tears. Their bedroom had doubled up as their kitchen.

Mary just nodded, not wanting to say anything, when she was asked about the moratorium on farm loans the LDF government had announced. It was her neighbour, a small farmer named Varghese Kunnathukudiyil, who responded. "A moratorium only postpones the payment. Next year she will have to pay up the entire amount with all the interest. How is she going to do it," he said. (The moratorium on all kinds of loans farmers had taken will remain in force till December 31, 2019.) "The government should show the sense to write off the loans of at least the most deserving," he said.

Farmers Onmanorama came across the district said the moratorium had not prevented banks from frequently calling them asking to pay up the monthly interest for the loans they had taken. Official figures show that 1.25 lakh farmers in Idukki are burdened by debt. Over 10,000 have already received attachment notices from banks, and this does not include farmers who had found refuge in private money lenders.

Johnny's widow Mary will not get the Rs 6,000 annual benefit promised by the PM-Kisan (Pradhan Mantri Kisan Samman Nidhi) scheme either. "Our land does not have 'pattayam'," she said. In other words, Mary and her family lives on encroached land. The PM-Kisan dole is only for those farmers with proper land deeds. Fact is, nearly 80 per cent of farmers in Idukki do not have a 'pattayam' or land deed.

The joint verification by the forest and revenue departments to identify and demarcate forest lands encroached upon before 1977, and after, was completed way back in 1992. (Forest Conservation Act, 1980, mandates that all forest lands encroached before 1977 should be regularised in the name of the occupant.) The government, therefore, has a fairly reasonable idea of lands in Idukki that have to be granted legal possession deeds.

Even then, innumerable small patches of agricultural lands, like that of Mary's, that were cultivated upon long before 1977, are still considered encroachments. "It is official negligence that is causing the delay in granting title deeds," said Josukutty J Ozhukayil, a retired college professor and a leader of Rashtriya Kisan Maha Sangh, a confederation of 36 farmers' organisations across the state. "We also know of cases where the official concerned asks for a bribe that is too prohibitive for a debt-stressed farmer. If they don't pay up, the official can come up with any number of reasons to stall the grant of the title deed," Josukutty said.

Without a land deed, the farmer is not officially considered a farmer and loses out on most government benefits. A bank loan, too, cannot be secured pledging this "illegal" land. This pushes the farmer to secure loan at prohibitive interest rates from private financiers. 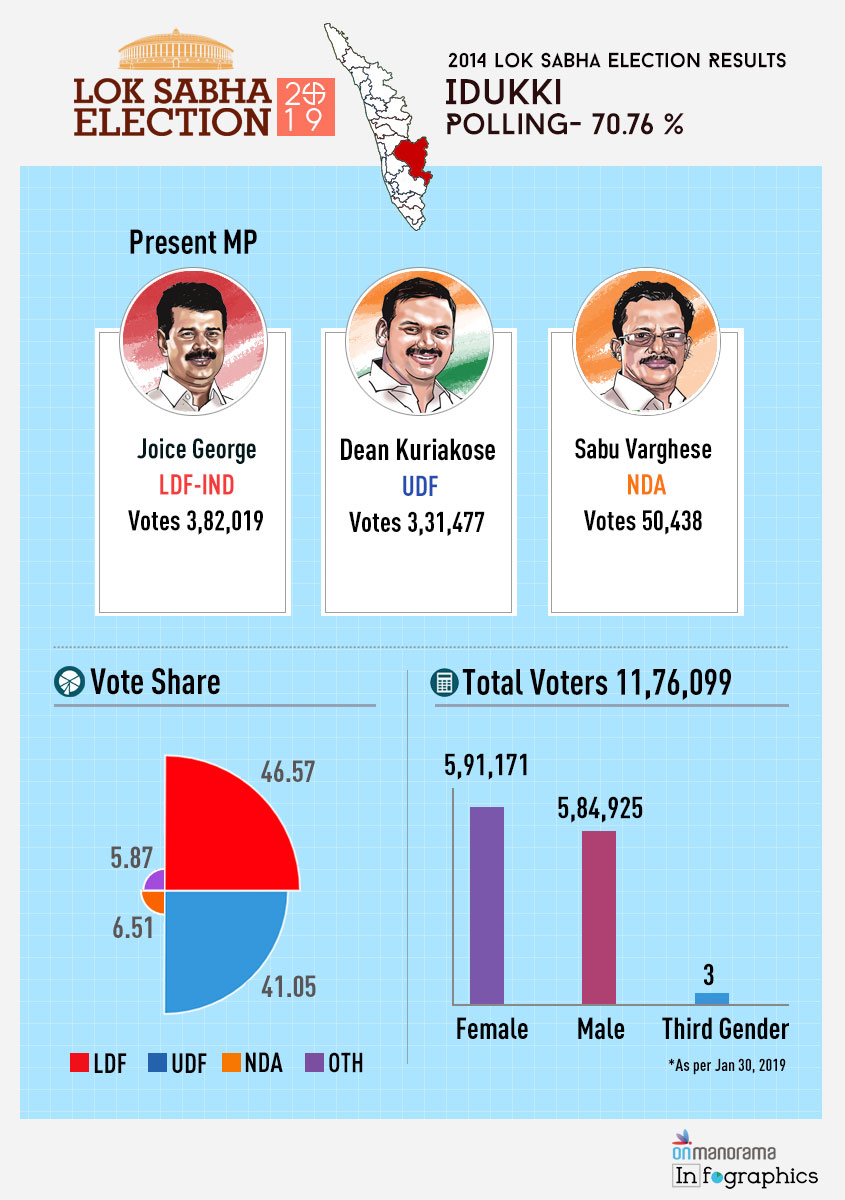 Santhosh, the young farmer in Mariyapuram near Thopramkudy who had committed suicide in January, was in possession of a pattayam-less land. He had nearly 70 cents of such land along the narrow Thopramkudy-Mariyapuram road where he had cultivated a bewildering variety of crops: cocoa, pepper, tapioca, banana, coconut, nutmeg, chilli, beans, cucumber. Since he did not have a title deed, it was his brother-in-law's land that he had pledged for some loan. Later on, when the going got tougher, his 'illegal' land was pledged with ruthless money lenders.

Ironically, Santhosh embodied the 'never say die' spirit of the settler farmer. Misfortune had stalked him like an animal possessed but he held on. "Some six years ago, he had planted some 6000-odd banana saplings on a leased land nearby. These were top quality saplings he had sourced from Tamil Nadu. He had spent at least Rs 300 to plant one, and then there was the constant upkeep and the huge lease rent he had to pay. Altogether he must have invested more than Rs 6 lakh. Then one night, there was a sudden hurricane and 4,500 of his banana plants were destroyed. All that he got by way of compensation was Rs 2,000," said Kuttichan Karakkat, Santhosh's neighbour.

This did not deter Santhosh. He kept borrowing money and continued farming. There was no water for farming in his land and so he dug up a well. When the digging did not fetch water, he brought in the machines and dug a bore well. This had cost him nearly Rs 2 lakh. When even this did not get him water, he purchased 35 cents of land nearby borrowing more money, dug another well, installed pipes and used a hose to pump water into a large pit he had constructed near his house. But the prices of his crops continued to fall, and after a point he just snapped.

The price of pepper, one of Idukki's major crops and Santhosh's too, has fallen by Rs 55 in three months. What was Rs 730 a kg in 2015 is now Rs 310. That of clover, another spice that is widely cultivated in the high ranges, fell to Rs 550 from Rs 720 two years ago. The price of cocoa and vegetables like beans and bitter gourd, too, have fallen dramatically. Cardamom alone fetches a reasonably good price; at Rs 1600 a kg it is enough to give the farmer a neat profit. But there is a reason why the price is up: the summer has electrocuted crop growth.

Intensifying the summer devastation is the acute scarcity of water in the area. Take for instance the Vazhathope area where Johnny Nellumpuzha committed suicide. A good part of Johnny's borrowings had gone to meet his water needs. The debt-ridden farmers here purchase 500 to 1000 litres of water daily for both irrigation and personal needs at the rate of Re 1 a litre.

To know why this is the result of callous dysfunctional administration, just walk a few metres up the road from Vazhathope to Mangalam Kavala. There on the roadside, partly hidden by trees and overgrown weeds, is an abandoned pumping station. It was supposed to pump water from the Idukki dam to Vazhathope and areas beyond it. During the trial run, the pipes burst and no one did anything about it thereafter. The pipes that were to be laid underground to carry water to the upper stretches still lie strewn about. "Had the authorities given it one more try, Johnny could have been perhaps saved," said Ratnakaran, Johnny's neighbour.

What was not destroyed by the floods have now been dried up by the March-April heat. Large swathes of hay-coloured cardamom stalks and wilted pepper leaves are a common sight across central Idukki. Josukutty, who is also a cardamom farmer, said that no amount of summer rains can revive a cardamom plant that has a dry stem. "It is the tuber root of the plant that gets dried up first and only then the wilting spreads upwards. Once the tuber is gone, the plant is of no use," he said.

Jose Varkey, a Thopramkudy farmer, has lost 200-odd pepper plants on 40 cents of land. Most of the pepper leaves on stems that creep around a sturdy stem have fully crumpled and curled up, like insects that were caught in a forest fire. "During the floods, too much of water had seeped down leaving the roots rotten and destroyed. And now, during summer, the roots are of no use," Varkey said about his pepper.

He knew how to save his pepper but the trick was beyond his means. "Just after the floods we should have applied a mixture of COC (copper oxychloride) and copper sulphate at the base of these plants," Varkey said. A dipper-full of the fertilizer would not have been enough. "We should have applied at least 15 litres at the base of each plant. From where is a small farmer expected to find money for this. The government should have stepped in," said Varkey, one of the rare Idukki farmers who have title deed for their lands.

It looks as if even a proper title deed is not of much help. "I have lost nearly 40 cents of my land to a landslide and I have still not received even the primary assistance of Rs 10,000," said Varghese Kunnathukudiyil of Vazhathope, another farmer with title deed. A substantial chunk of the cocoa and pepper that he had planted along a 70-cent terraced slope were washed away by a particularly nasty landslide last August.

He has now revived the destroyed slope by creating 12 terraced areas, each one supported by a rock-filled retaining wall. The money required for the restoration work, he borrowed. "Since I was told I could get compensation, I had taken photographs and showed it to the officers in Krishi Bhavan. No money has come my way till now," Varghese said.

A few kilometres to the east in Upputhodu, 67-year-old Joseph is busy trying to put together the pieces. A massive landslide that had began on top of the imposing hill opposite his house crashed down, spared his house but bombed through his neighbour's house killing four and fully flattened the four acres of agricultural land he had painstakingly cultivated over the years.

His single-storey concrete house now stands on the verge of the precipice the landslide had created. "It will take me more than a year to make the land fit for cultivation," he said. The compensation he had received was Rs 30,000, a fraction of what he would require to resume farming. Asked whether he would vote, Joseph sounded as determined as Johnny's widow Mary. "I will. I am not going to let this chance go by," he said.

Gadgil and Kasturi not as scary

Future shocks like Gadgil and Kasturirangan reports have ceased to matter in Idukki. The Western Ghats Ecology Expert Panel (WGEEP) report, better known as the Madhav Gadgil report, had branded nearly 25,000 sq km of the total geographic area of Kerala as ecologically sensitive zones (ESZs) in 2011; the entire Thodupuzha, Udumbanchola, Devikulam and Peerumedu talukes in Idukki were included in ESZ(1) where all development activities would be prohibited.

The high-level working group under space scientist Kasturirangan whittled down the total ESZ in Kerala to 13,000 sq km in 2013. The Oommen Chandy dispensation then further pared it down to 9993 sq km. Still deeply dissatisfied, the church-backed High Range Samrakshana Samithi put up their own lawyer, Joice George, as a candidate in the 2014 Lok Sabha polls and got the CPM to back him.

Joice is once again the CPM-backed independent candidate in Idukki. But unlike last time, not a single Joice George poster mentions he is the candidate of the High Range Samrakshana Samithi. The Idukki diocese, which had openly supported Joice George in 2014, has gone neutral this time. Five years later, immediate survival alone matters.