New Delhi: Coming festive season government employees will receive interest-free advance of Rs 10,000 each that will help generate demand worth Rs 8,000 crore in the COVID affected economy. Employees will get pre-loaded Rupay Card of the advance value, which they would have to spend by March 31, 2021.

The amount spent would be recoverable in 10 instalments. The bank charges for the issue of card will be borne by the government.

With a view to boost consumer demand and revive the economy which has been subdued amid the pandemic, Finance Minister Nirmala Sitharaman on Monday announced a slew of measures to stimulate expenditure by the public.

As per the minister, the scheme would ensure digital mode of payment, resulting in tax revenue and encouraging honest businesses. But unlike the LTC scheme, consumers would be free to spend the amount on items of their choice irrespective of GST applicability. 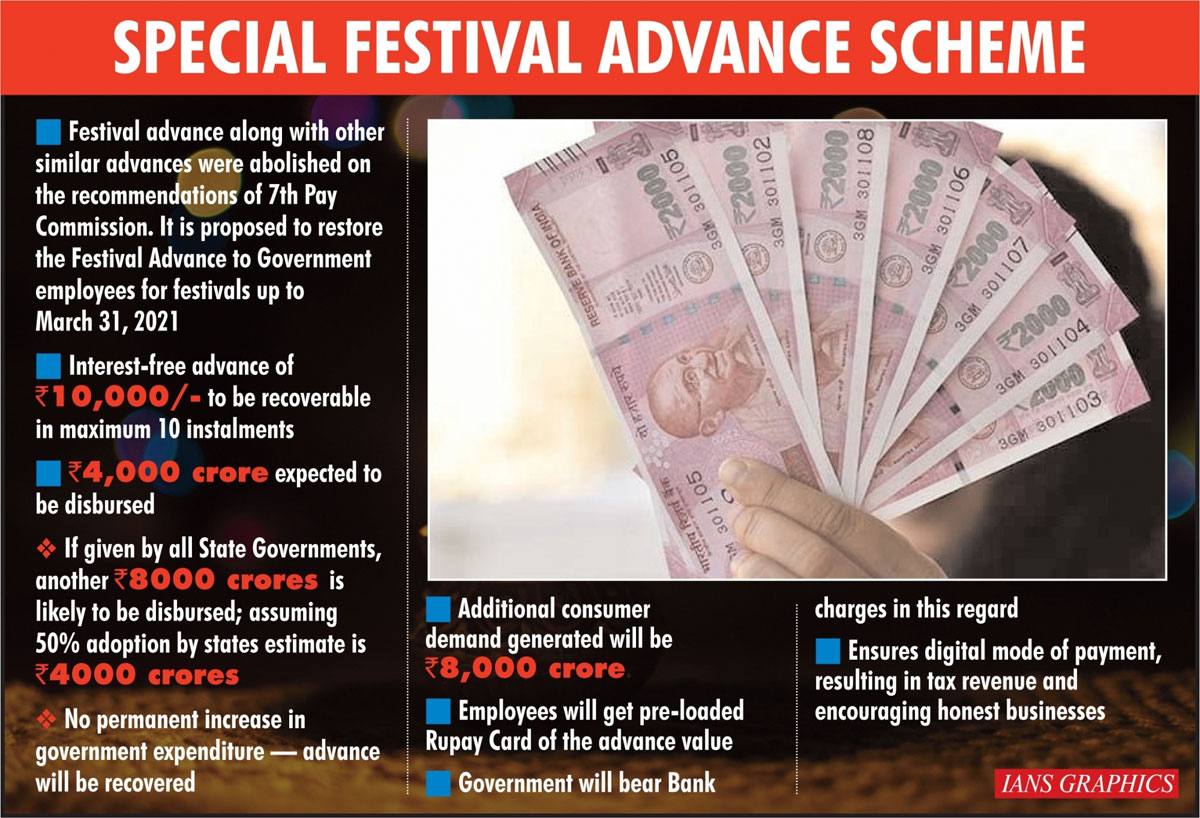 Festival advance along with other similar advances were abolished on the recommendations of 7th Pay Commission. Prior to this, non-gazetted central government employees used to get Rs 4,500 as festival advance.

With the latest proposal, the festival advance to government employees (both gazetted and non-gazetted) will be for festivals up to March 31, 2021.

The Centre, is likely to disburse Rs 4,000 crore towards the advances.

If implemented by all state governments too, another Rs 8,000 crore is likely to be disbursed, with the current assumption that 50 per cent states would adopt the scheme and the states' expenditure estimate would be at Rs 4,000 crore.

This scheme would not result in any permanent increase in government expenditure and as it advances will be recovered.

Cash instead of LTC

The government on Monday announced giving out cash vouchers to central government employees this year in lieu of leave travel concession (LTC) fare which could be spent only on buying non-food GST-rated items.

Finance Minister Nirmala Sitharaman said the employees could buy items that attract 12 per cent or more goods and services tax (GST). These purchases will have to be made in digital mode from GST-registered outlets.

Every four years, central government employees get LTC to any destination to their choice plus one to their hometown.

Since travel is difficult to undertake during the pandemic, the government will pay the entitled fare as cash vouchers which have to be spent by March 31, 2021, she said.

Central government payout on cash-in-lieu-for-LTC will be Rs 5,675 crore, and another Rs 1,900 crore will be payout by central PSUs and public sector banks, Sitharaman said.

Sitharman also announced a Rs 12,000 crore interest-free 50-year loan to states for spending on capital projects in a bid to boost economy.

Addressing a press conference, she said, out of the Rs 12,000 crore, Rs 1,600 crore will be given to north-eastern states and Rs 900 crore will be for Uttrakhand and Himachal Pradesh.

The loan will have to be spent entirely on new or ongoing capital projects, she said adding that states can settle bills of contractors and suppliers but all the amount has to be paid before March 31, 2021.

The loan is over and above borrowing ceilings of the states and the repayment will be one bullet payment after 50 years, she added.