Analysis | Gujarat Assembly polls phase 1 is no cakewalk for BJP

Ahmedabad: The high-voltage campaign for the first phase of the Gujarat Assembly elections ended on Tuesday.

The ruling BJP, which survived a scare in 2017, cannot disregard the anti-incumbency factor while banking on Prime Minister Narendra Modi's mass appeal. In other words, it won’t be a cakewalk in 2022.

This election will be unique for the second most industrialised state in the country that has long seen bipolar electoral battles.

With the entry of new players like the Aam Aadmi Party (AAP) and All Indian Majlis-e-Ittehadul Muslimeen (AIMIM), the political dynamics are expected to change.

For the ruling BJP, which has won six successive terms and aims at retaining power, the elections are crucial.

The party is heavily dependent on the popularity of Prime Minister Narendra Modi, who was the Chief Minister from 2002-2014.

While the mass appeal of Modi will work in favour of the BJP, the anti-incumbency factory still looms large over the party. Also, the lack of any local leadership may affect the ruling party’s margins.

On the other hand, the AAP has built its cadre over the past couple of years across the state. Confident after its win in Punjab and in power in two states, the AAP is hopeful of making a dent in the saffron bastion. It is desperate for a win in Gujarat, as that will propel it to a pan-India political force.

Kejriwal has anchored his party's campaign around a slew of sops, including 300 units of free electricity per month, free education in government schools, an unemployment dole, a Rs 1,000 allowance to women and a monthly stipend for new lawyers.

The Congress hopes to end its 27-year stint in the Opposition but has so far been quiet, with most of its national leaders conspicuous by their absence.

The Congress performed better in 2017 compared to 2012 with 77 seats leaving BJP with just 99. However, over 20 Congress MLAs defected to join the BJP between 2018 and 2019. Some quit the party after the 2022 elections were announced. 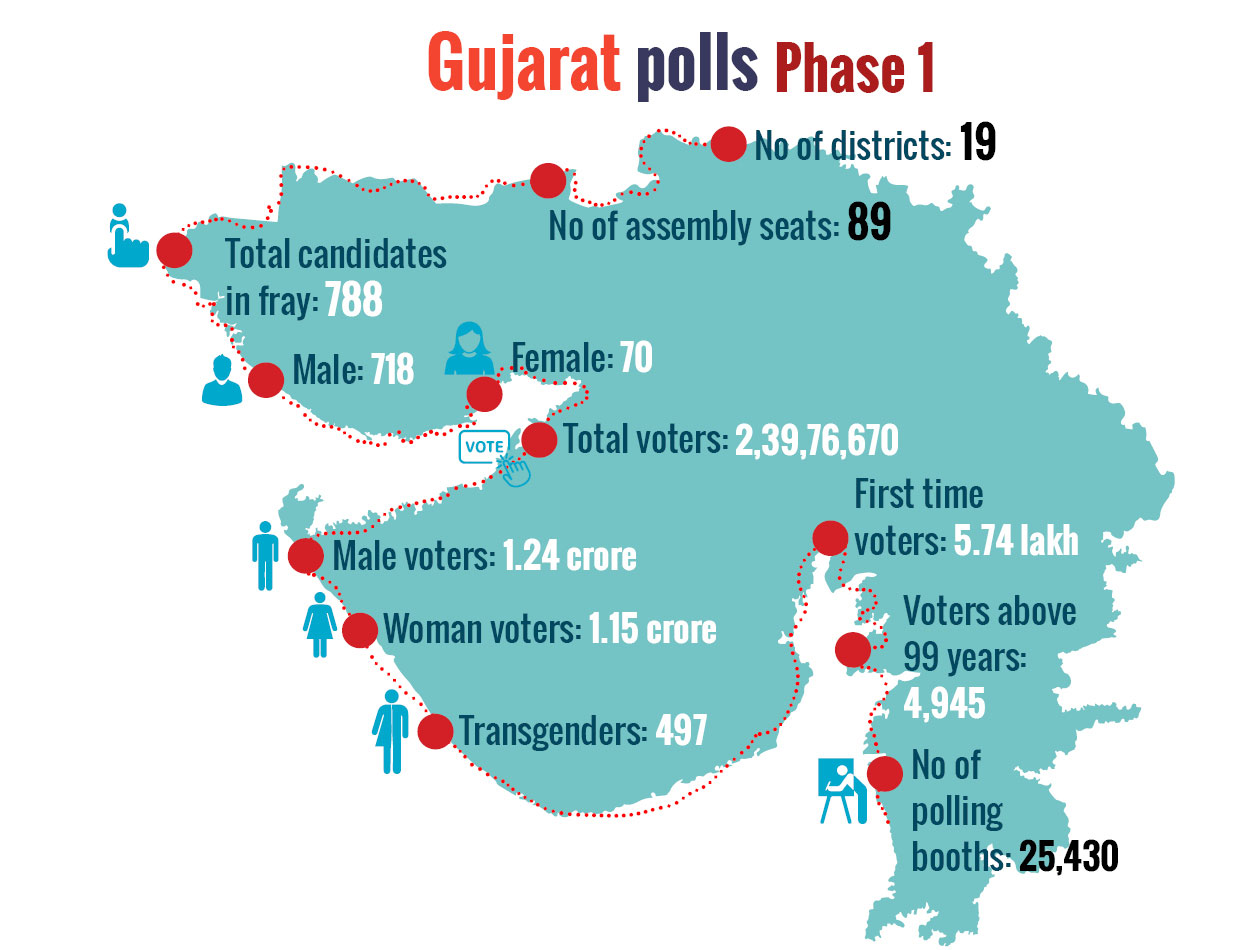 The BJP has 111 seats and the Congress 62 in the current assembly. The Bharatiya Tribal Party (BTP) has two legislators and the NCP has one seat. There is an independent MLA and five seats are vacant – including three caused by the resignations of Congress MLAs.

The BJP is banking on its outreach to the Patidars after facing the community's ire in the 2017 polls over the quota agitation.

Its decision to make Bhupendra Patel chief minister in September last year and bring the quota stir spearhead, Hardik Patel, into its fold may work in the party's favour.

Though the BJP may put up a confident face, factors like inflation, unrest among the farmers and fishermen, the Morbi bridge collapse that killed 135 people, infighting in the party, remission of Bilkis Bano case convicts, lack of health and education infrastructure are areas of concern.

This can be gauged from the fact that Prime Minister Narendra Modi and home minister Amit Shah themselves have addressed over 60 rallies each across the state before the end of the first phase of campaigning.

This is not all. The BJP roped in an army of its leaders, terming it ‘carpet bombing’.

The change in narrative during the poll campaigns by Modi and Shah, who are leading the pack of BJP leaders, was an indication that all is not well at the ground level.

In the first round of elections rallies, Modi used his government's development schemes to woo the people in Saurashtra and South Gujarat regions.

But by the second round of campaigning Modi switched to the offensive and targeted Congress leader Rahul Gandhi over activist Medha Patkar joining his Bharat Jodo Yatra. Modi called Rahul and Congress anti-Gujarat for supporting Patkar, who, according to the BJP, had stalled the Narmada Dam project for over 30 years.

Modi further upped the ante with ‘Congress against tribals’ and ‘Congress using religion and terrorism for appeasement politics’ jibes towards the end of the campaign. Speeches of Amit Shah and Yogi Adityanath also toed the same line.

The BJP promised to implement the Uniform Civil Code (UCC) and set up an 'Anti-radicalisation Cell' to identify and eliminate terror threats in its manifesto.

It also promised to conduct surveys of madrassas and scrutinize the assets of the Waqf Board. Its other poll promises included the creation of “20 lakh employment opportunities” and taking the state's economy to USD one trillion in the next five years.

It also pledged one lakh government jobs for women over the next five years.

For the Congress, the only advantage is that despite losing to BJP six times in a row, the party has steadily maintained around 40% vote share. The party is expected to get support from their traditional voter base--the OBCs like Thakor and Koli communities, Scheduled Castes, Scheduled Tribes and Muslims.

There are 66 urban and semi-urban seats which the Congress has not been able to win in the last 30 years. However, it has maintained its dominance in the rural seats of the Saurashtra and Kutch region.

But with severe infighting and the absence of top brass from election campaigning, the Congress in Gujarat seems to be left to fend for itself.

In its manifesto, Congress promised to restore the name of the Narendra Modi Stadium in the Motera area of Ahmedabad as Sardar Patel Stadium.

It also said it would revoke the remission granted by the state government to 11 convicts in the 2002 Bilkis Bano case allowing their premature release from jail.

The Congress also promised an unemployment allowance of Rs 3,000 per month, Rs 2,000 pension to divyangs, widows, senior citizens and needy women, and a waiver of loans of up to Rs 3 lakh for all fishermen.

A total of 1,621 candidates are in the fray for the 182-member Gujarat Assembly elections scheduled to be held in two phases on December 1 and 5. The counting of votes for both phases will be held on December 8.

As many as 788 candidates are in the fray for 89 seats (across Saurashtra, Kutch and South Gujarat) that will go to the polls in the first phase of elections. For the 93 seats (in Central and North Gujarat) where elections would be held in the second phase, there are 833 candidates in the fray.

New entrant Aam Aadmi Party (AAP) has fielded candidates on all 182 seats, but its candidate withdrew his nomination from the Surat East seat.

All Indian Majlis-e-Ittehadul Muslimeen (AIMIM) fielded candidates in 14 Assembly seats but its candidates withdrew from the Bapunagar seat in Ahmedabad.

The Congress won the first three Assembly elections in 1962, 1967 and 1972 in Gujarat. In the elections fought after the imposition of Emergency in 1975, it lost to an alliance of parties led by Morarji Desai, the Jan Sangh and rebel Congress leader Chimanbhai Patel’s Kimlop party. Two subsequent elections in 1980 and 1985 were won by the Congress.

In 1990, the Janata Dal and the BJP emerged as dominant forces. The BJP has won every Assembly election from 1995 onwards. It has been in power since, except for a brief period from 1996 to 1998 when its leader Shankarsinh Vaghela rebelled and formed a government with the Congress' support.

Prominent candidates in the first phase include AAP’s chief ministerial face Isudan Gadhvi, who is contesting from Khambhalia in Devbhumi Dwarka district.