Be vigilant when you return home after flood

The floodwaters are receding in Kerala as the week-long heavy rains are waning. Yet, for those planning to return home, it is advisable to ensure that there won’t be another round of deluge soon. People must ideally stick to the following practical tips:

• Don't be alone when you return home. Take with you a couple of people, who can be of (mutual) help when there is a sudden emergency.

• Never take children with you; the accompanists should be adults.

• Don’t return to home at night. Go when it’s daytime, so that you can see everything around.

• Must expect reptiles inside the house and outside.

• There can perhaps be a cooking-gas leak from the kitchen; so never use light fire — be it to use a candle or smoke a cigarette. 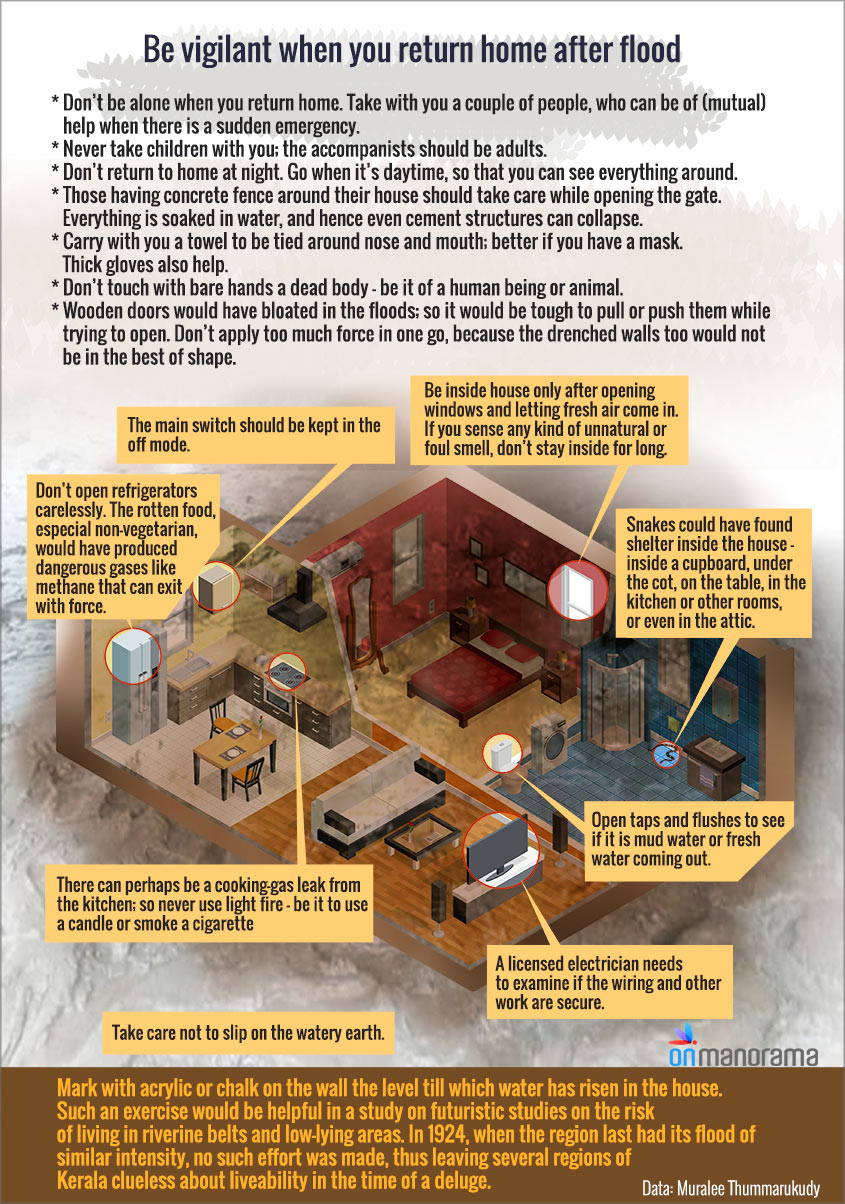 • Those having concrete fence around their house should take care while opening the gate. Everything is soaked in water, and hence even cement structures can collapse.

• Take care not to slip on the watery earth. Carry with you a towel to be tied around nose and mouth; better if you have a mask. Thick gloves also help.

• Don't touch with bare hands a dead body — be it of a human being or animal.

• Mark with acrylic or chalk on the wall the level till which water has risen in the house. Such an exercise would be helpful in a study on futuristic studies on the risk of living in riverine belts and low-lying areas. In 1924, when the region last had its flood of similar intensity, no such effort was made, thus leaving several regions of Kerala clueless about liveability in the time of a deluge.

• Switch of the main electricity board before you enter the house. Also ensure that LPG cylinders are switched off.

• Wooden doors would have bloated in the floods; so it would be tough to pull or push them while trying to open. Don’t apply too much force in one go, because the drenched walls too would not be in the best of shape.

• Be inside house only after opening windows and letting fresh air come in.

• If you sense any kind of unnatural or foul smell, don’t stay inside for long.

• Don't open refrigerators carelessly. The rotten food, especial non-vegetarian, would have produced dangerous gases like methane that can exit with force.

• Make an estimate of the financial loss of every object inside, click their pictures.

• Open taps and flushes to see if it is mud water or fresh water coming out.

• Whenever there is sunlight, let the windows remain open for fresh air to circulate the inside of the house.

• Gather a definite idea with the rest in the locality on where to dump things that have gone into disuse owing to the flood. The decayed stuff is not just to be casually thrown somewhere.

(The writer, a native of Vengola in Ernakulam district, is an internationally renowned disaster management expert working with UN Environment Programme.)