Nuns brought from Punjab to torture us, says Sr Anupama in first interview after transfer

Kozhikode: “Nuns, who protested against rape-accused bishop Franco Mulakkal seeking his arrest, are being victimised and the transfer of four of them is an attempt to harass them,” Sister Anupama, a Missionaries of Jesus nun who led the agitation, told Onmanorama on Thursday.

“Three nuns holding key posts in Punjab were being purposefully brought to Kuravilangad Convent (in Kerala's Kottayam district) to torture us,” she alleged.

Four of the five nuns (rape victim not included), who had staged a protest in front of the high court in Ernakulam, have been transferred recently from Kuravilangad Convent to four different locations by the Missionaries of Jesus.

Sr Anupama, Sr Alphy, Sr Josephine, Sr Ancita, Sr Neena were the protesters who had sought justice for the victim nun. Sr Anupama has been transferred to Amritsar in Punjab, Sr Ancita to Pariyaram in Kannur, Sr Alphy to Bihar and Sr Josephine to Jharkhand. Sr Neena and the victim nun were not shifted from Kuravilangad.

“This transfer is an attempt to weaken the case and silence the victim further. Already, three senior sisters, who are holding other important charges in Punjab, were brought here purposefully to torture us as directed by bishop Franco,” Sr Anupama said.

One of the three senior sisters brought from Punjab is the present Mother Superior of Kuravilangad convent. She is also holding the same post in a Punjab convent and principal of a school there. Another Mother Superior in Beas convent has also been shifted here. A Novice Mistress (a senior position in convent hierarchy) in Jalandhar has also been brought to Kuravilangad.

“The new Mother Superior of Kuravilangad convent was brought in October and the other two reached in December,” Sr Anupama said.

However, the four transferred sisters made it clear that they will not leave Kuruvilangad convent under any circumstances.

“Why should we leave? We have been living for this Church all these years. If they wanted us to go, they should have ensured the security for our sister (the victim). They could not support her, and why should we go to those who are trying to destroy us? We are neither safe here nor at the place they want us to go. We want to stay back here till our case is over,” Sr Anupama said.

There is no support from the Church for the protesting nuns and the victim, she said, adding the transfer amounts to emotional torture and ostracism.

“Staying together is the only relief for all of us. Others don't even talk to us, we are not given any duty here. We are being treated like some terrorist groups. Till this issue surfaced, we had been active everywhere and suddenly we are like caged,” Sr Anupama added.

Recently, the nuns started a small poultry farm. Sr Anupama said even the autorickshaw driver, who brought the newly-hatched chicks to the convent, was also threatened. She has not named the person who threatened the driver. A helper the sisters employed to till the farm also faced threats.

After the new Mother Superior took charge at Kuravilangad, she ensured that the nuns did not have any interaction with the outside world.

“When the previous Mother Superior was transferred, we did not even come to know about her leaving,” she said. 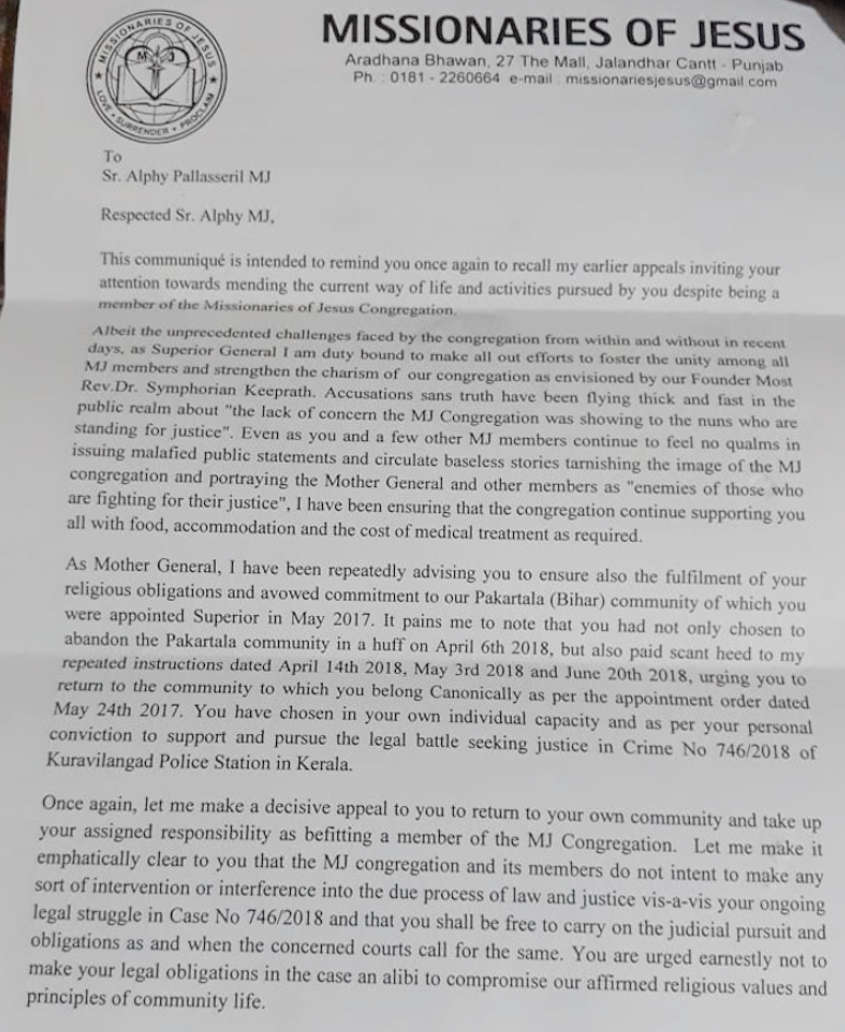 Sr Anupama said they were even denied money to go to hospital and treatment.

On several occasions, they were turned away saying that there is no fund.

Three police officers, including a woman officer, are giving 24-hour protection to the nuns here.

Sr Anupama had reached Kuravilangad convent from Gurdaspur in Punjab, to offer support to the victim last year.

History of the case

Bishop Franco was arrested on September 21, 2018, on charges of rape, unnatural sex, criminal intimidation and illegal confinement, three months after the complaint by the victim and protests by her fellow nuns in Ernakulam.

Franco, who got bail on October 15, received a rousing welcome from his followers in Jalandhar when he reached there.

(Missionaries of Jesus or Kuravilangad Convent is yet to respond to the charges levelled by Sr Anupama. Onmanorama will update this interview whenever the convent issues a rebuttal to these allegations.)

Tags:
MORE IN KERALA
LOAD MORE
The comments posted here/below/in the given space are not on behalf of Onmanorama. The person posting the comment will be in sole ownership of its responsibility. According to the central government's IT rules, obscene or offensive statement made against a person, religion, community or nation is a punishable offense, and legal action would be taken against people who indulge in such activities.
in1gdf1l48m5qcc3dlkci5ag4 https-www-onmanorama-com-news-kerala https-www-onmanorama-com-acp 4sevvvh9oec4jshvh529ainrj onmanorama-topic-destination-4-jalandhar-bishop-franco-mulakkal