The court had directed the state government, in no uncertain terms, to pull down the buildings that violated CRZ rules.

The cacophony around the demolition, however, has submerged the other 61 major CRZ violations by private companies and individuals. These violations were unearthed by the Kerala Coastal Zone Management Authority (KCZMA), the agency to implement CRZ norms.

The list was prepared by the agency to answer a question raised in the Lok Sabha.

According to it, 60 private companies and five individuals have violated the CRZ rules in seven coastal districts. 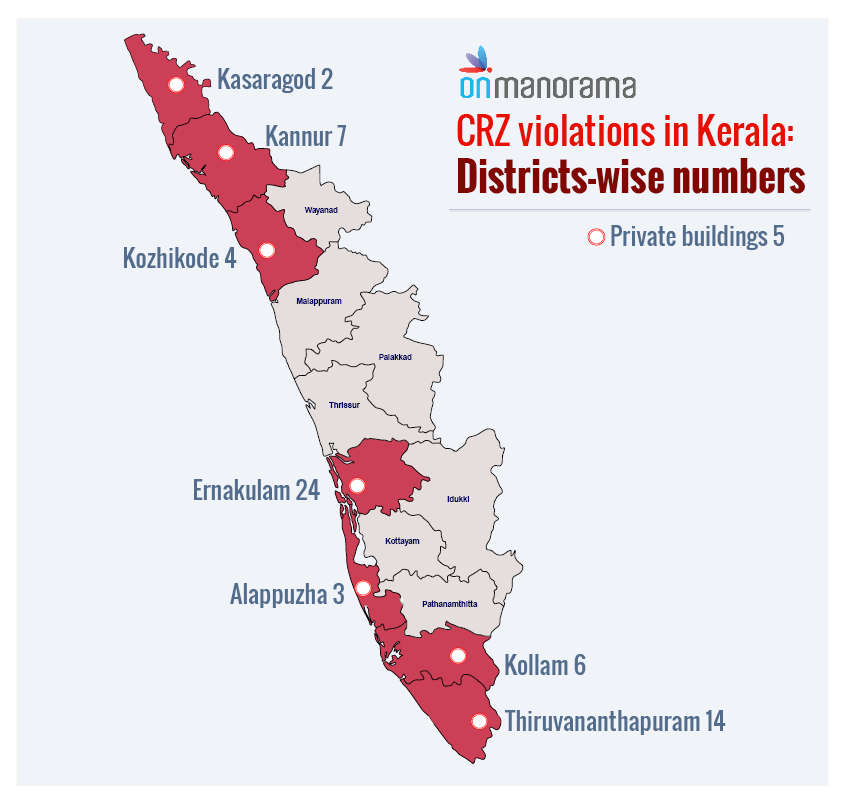 Apart from the four buildings in Maradu, the list contains the name of Holiday Heritage, which is yet to be constructed.

Here is the district-wise list of violations by private companies and owners, prepared by the Kerala Costal Zone Management Authority:

13. Construction of flat by Alfa Ventures in Maradu

16. Construction of flat by Holiday Heritage in Maradu

43. A new building near United Club and Cliff Road

44. A large hotel construction near to the Military Hospital

Reacting to the KCZMA findings, Confident Group said it has not constructed any building, violating the Coastal Regulation Zone rules.

The group's Managing Director TA Joseph said his company had, in fact, called off a project in Maradu despite getting permission from the gram panchayat in 2006-2007.

“We received plan approval for a high-end waterfront project, Confident Avior in Maradu, in 2006-2007. After the launch of the project, a lot of incidents happened at Maradu gram panchayat. The panchayat secretary was arrested for bribery and the government revoked all building permits approved during his tenure," the statement read.

He said his company received favourable court order to resume the project. "We have two existing old buildings close to the banks of the Netoor thodu, numbered prior to 1991. However, keeping the criteria stipulated in CRZ rule, we had called off the project just because of insufficient road width in few spots as per the Kerala Municipal Building Rules, as we did not want to take any risk when it concerned our clients. We are still holding it as a land bank," he said.

"Out of 350 units in six acres land, we sold around 65 units within 45 days from the date of launch. We had refunded the entire money with interest which we collected from people who invested in the project," he said.

(This story has been edited to include Confident Group's reaction)

Tags:
MORE IN KERALA
LOAD MORE
The comments posted here/below/in the given space are not on behalf of Onmanorama. The person posting the comment will be in sole ownership of its responsibility. According to the central government's IT rules, obscene or offensive statement made against a person, religion, community or nation is a punishable offense, and legal action would be taken against people who indulge in such activities.
https-www-onmanorama-com-news-kerala https-www-onmanorama-com-acp onmanorama-topic-general-topics-10-coastal-zone-regulations 741829gie7lhlt5i8q28vor102 onmanorama-topic-general-topics-22-kerala-coasts