Thiruvananthapuram: Will the airport near Sabarimala hill shrine become reality soon? The answer seems to be yes, going by the recent initiatives of the Kerala government.

On Wednesday, it kick-started the process to acquire 2,262 acres of land, which is in possession of the Believers Eastern Church Council, at Cheruvally Estate near Erumely in Kottayam district. The estate lies 3km from Erumely town along the Erumely-Pathanamthitta state highway.

Revenue department had advised that the land could be taken over as per the Centre's Land Acquisition, Rehabilitation and Resettlement Act, 2013. Only 1,000 acres of the estate is required for the airport. The remaining land will be used for related activities.

The major obstacle, however, seems to be a pending case in the Kerala High Court over the land ownership. The government plans to overcome this by depositing the land's price at the court.

Meanwhile, the Believers Church has said it is unaware of the land acquisition plans.

After completing land acquisition, the government has to prepare a detailed project report (DPR) and a master-plan. Airport construction could begin only after getting clearance from the Ministry of Environment and Forests.

Being a sparsely populated location, the authorities will not face any major eviction challenge. However, getting the environmental clearance appears to be a humongous challenge.

V Thulasidas, Managing Director of the Kannur International Airport Limited (KIAL), explained the different steps of setting up the airport. The first step, he said, is to submit a report to the Union Aviation Ministry, explaining why an airport should be constructed at Erumely and preparations for land acquisition.“ The aviation ministry would give the green signal after holding discussions with other ministries," he said.

In all likelihood, the proposed airport would follow the business models of Nedumbassery and Kannur airports. Both airports are being managed by independent companies.

Thulasidas said the preparation of the project report is an important task. “It will have details of runway, wind flow and elevation. A call on the types of flights to be operated would be taken after conducting a market survey that would reveal the likely number of passengers, preferred destinations and expected cargo movement,” he said.

The director general of civil aviation has to grant permission for the aerodrome licence after completing the construction. “Regular flight operations will begin only after getting final approval from the Airports Authority of India,” he said.

If everything goes according to the plan, the airport will be completed within five to eight years.

The Nedumbassery airport was completed in six years, while it took 20 years for the Kannur airport to become operational. 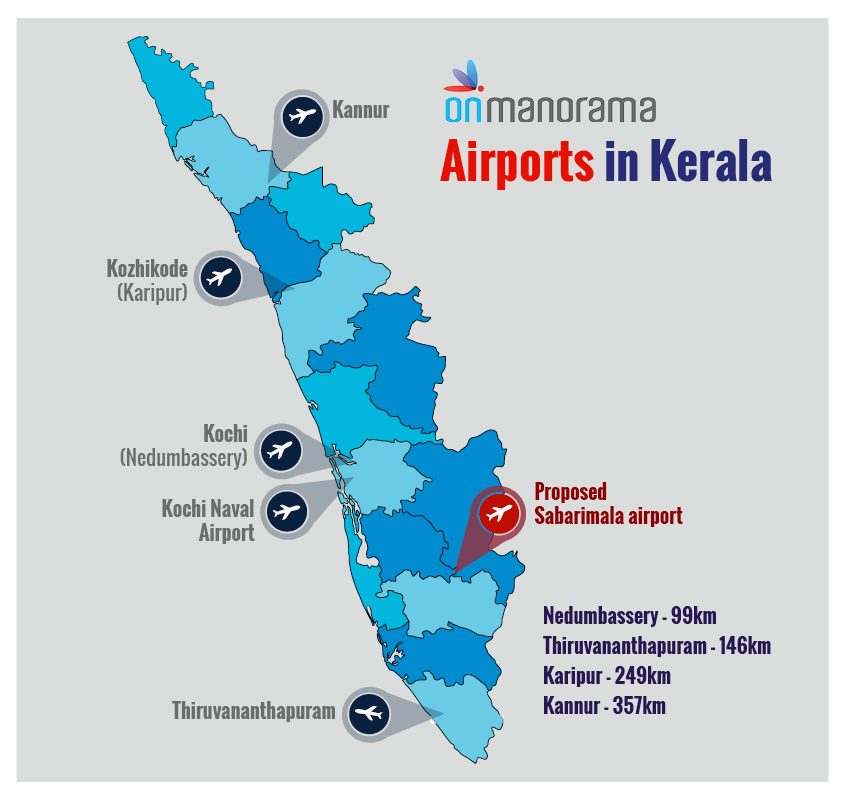 The airport is expected to benefit around three crore pilgrims to Sabarimala temple, five lakh expatriates from Pathanamthitta, Idukki and Kottayam districts, and thousands of domestic and international tourists to Munnar, Thekkady and Kumarakom. The other nearby airports are at Nedumbassery, Madurai, and Thiruvananthapuram.

Situated in high altitude, the proposed airport will not face flood threats. It must be remembered that the Nedumbassery airport had to be shut twice in August 2018 and 2019 due to floods.