Get out only if it is absolutely necessary. Download this affidavit

As part of efforts to increase lockdown compliance, Kerala police registered 2,873 cases on Wednesday, the second day of the statewide lockdown. Cops also seized 1,622 vehicles. So venture out of home if it is only absolutely necessary. On Thursday, and coming days, cops will take more stringent measures.

Police would ask for a written declaration from anyone who ventures out of his home in his private vehicle. 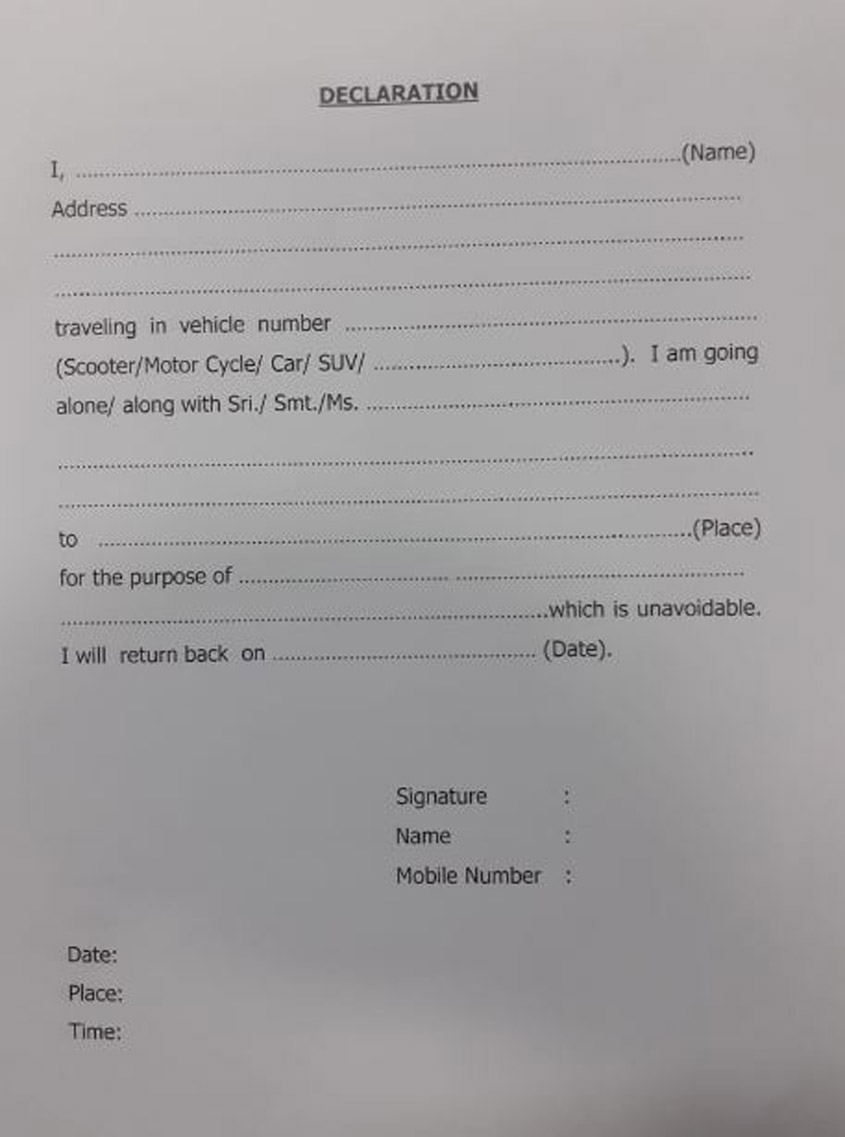 Only those travelling out of absolute necessity will be allowed to proceed. False declaration would invite legal action. Those involved in essential services like health, medical shops, provision stores, internet, vegetable, milk and sh sales, telecom and the media would be provided with an "exemption pass" to move about. These passes would be distributed by the district police chiefs. The additional lockdown measures were announced by State Police Chief Loknath Behera.

On March 23, while declaring the lockdown, Chief Minister Pinarayi Vijayan had said people could travel in private vehicles, provided it had only one person besides the driver. On Tuesday, a crowd of private cars were found on the state's thoroughfares, threatening to defeat the very purpose of the lockdown.

In places like Thiruvananthapuram, private vehicle use was done most irresponsibly but in such a way as to show that no lockdown restrictions were violated. For instance, private cars with just two occupants moved in a convoy of 15 or 20 towards weddings and other events on Tuesday.

Such rash behaviour has prompted the introduction of the sworn affidavit. The affidavit will be a printed one with blanks for the individual to fill in. It is a kind of self-declaration in which the travelling individual will have to give his/her name, vehicle number and the destination and the address to which he or she is travelling.

It is not all. The declaration should also say why the travel had been undertaken, like to take father to the hospital or to buy medicines for mother. It should also show when the person expects to return.

The DGP also said contract vehicles like autorickshaws and taxis could be availed of only for going to the hospital or for the purchase of essential commodities.

MORE IN KERALA
LOAD MORE
The comments posted here/below/in the given space are not on behalf of Onmanorama. The person posting the comment will be in sole ownership of its responsibility. According to the central government's IT rules, obscene or offensive statement made against a person, religion, community or nation is a punishable offense, and legal action would be taken against people who indulge in such activities.
https-www-onmanorama-com-news-kerala https-www-onmanorama-com-acp 1ndv45nl37l76ijl1da979btnp