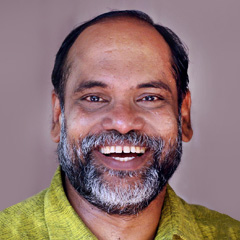 The radars of Kerala’s reading public are primed to capture all flights on the global literary firmament. Connoisseurs never miss a good work of fiction from Latin America or Europe. But the whimpers of accomplished litterateurs back home go under the radars, unnoticed and unsung.

After his maiden novel ‘Barekka’ was released recently, writer Satheesan K T, who is a mason by profession, got two phone calls, which moistened his eyes. The callers were professor Aliyar and B V Sasikumar, former teachers of Malayalam at Sree Neelakanta Government Sanskrit College, Pattambi, where he did his pre-degree (equivalent to Class XI and XII) around three decades ago.

“Though I could not complete my pre-degree, I loved to sit in their classes. Also, I had not told my family that I failed in the pre-degree course. So, I used to go to college and attended their BA class. But I never expected they would remember me because of my writing,” says Satheesan, who has published several short stories as well.

Satheesan is working on his second novel. His characters evolve out of his experiences as a mason in the past few decades.

“But even now there are people who wonder how a mason can be a writer. This often embarrasses me because your literary career has nothing to do with your profession, though it can be a catalyst,” he says.

The experiences and its synthesis within form the basis of my works, be it short stories or the novel 'Barekka,' named after an imaginary port town, he says.

Satheesan says it is a prejudiced and perverted approach that classifies some writers under the ‘reservation category’ just because their profession is different.

This approach is contiguous with the Malayali psyche that has a ‘white-collar’ obsession, says Shafi Cherumavilayi, an accomplished Tamil-Malayalam translator from Kannur. He works as a mason, too.

“Literature is my passion while masonry is my profession. So, I don’t want to mix it up. I don’t want anyone to read my works just out of sympathy,” says Shafi, who has the translations of eleven novels and over 250 short stories to his credit, published by reputed publishers, including Kendra Sahitya Akademi, New Delhi. “Now, I am translating an award-winning novel by Tamil writer S Ramakrishnan for the Akademi. Even now, there is a tendency among some Malayali readers to relate my creative life and occupation,” he says.

The author says his translations from Tamil to Malayalam are picked up by publishers for its merit. “It is not because I am a mason,” he said.

It was in the 1980s that he ‘stumbled upon’ the charm of translation. He had to learn Tamil while working in a tea shop in Bengaluru (then Bangalore).

“After I failed in the SSLC examination, I left home in search of a job and reached Bangalore, where I worked in a tea shop. Since most of the customers were Tamilians, I was compelled to learn Tamil. Once I learned it I felt I should translate some works into Malayalam and began with some short stories,” he said.

He went to the Gulf in 1994, where he worked as a mason for three years and then came back to Kannur.

He was recognised as a translator for his 2008 work on ‘Ananthasayanam Colony,’ a collection of short stories by Thoppil Mohammed Meeran.

Nowadays, he does translation mainly when writers seek him out and recommend his name to publishers.

He says he can work on his literary endeavours at night, after his day job as mason. He says it is tough to survive as a full-time writer in Malayalam.

The ‘white-collar’ attitude of Malayalis is strange, says Shukoor Pedayangode, a poet who runs a wayside tea shop near his native place in the interiors of Irikkoor in Kannur.

His love for literature made him open this tea shop which is the venue of literary events often attended by many eminent writers.

“From M Mukundan, Zacharia and N Prabhakaran to Kalpetta Narayanan and Rafeeq Ahmed, writers from other languages like Perumal Murugan Jeyamohan and Vivek Shanbhag, too, have taken part in events organised here. Their works were discussed at length,” he says.

“I began my life as a mason after dropping out of school and then owing to health issues I turned to fish trade. This was my gateway to literature,” he says.

Selling fish was not just a profitable business but it also brought him closer to the people, especially ordinary people, mainly women.

“I used to write earlier but had stopped in between. But real life experiences brought me back to writing, which, in turn, inspired me to open this wayside tea shop with a literary flavour,” says Shukoor. He has four collections of poetry and one novel to his credit.

‘Veranda,’ his tea shop, is ‘a symbolic snub’ on the literary establishments which do nothing other than stocking and stacking books, Shukoor says.

“After I started this engagement in August 2015, I organised around 44 debates and many libraries have followed this pattern,” he says.

Now, he is planning to open a small library as well, using the funds he got in the form of a literary award (CH Memorial Award) and contributions from elsewhere.

It was not literature but selling fish that helped him raise his family and build a house. His tea shop is part of literary history now and is an undeniable part of the literary circuit.

“But even now, there are people who look at me with sympathy, which reflects the prejudice of a society. We need to break it,” Shukoor says.

(P Sudhakaran is an independent journalist based in Kannur)