The Thamarassery Bishop's House of the Syro-Malabar Church witnessed an unusual meeting on Friday, September 17.

It delved into the controversies surrounding a Malayalam book published by the Thamarassery diocese, which comes under the Syro-Malabar Church. Thamarassery is in Kerala's Kozhikode district.

The book in question - 'Satyavum Vasthuhathakalum 33 Chodyotharangaliloode' (Truth and facts in 33 questions & answers) - contained several derogatory and defamatory statements against the Muslim community. For example, it stated that 'love jihad' was a reality and urged parents to protect their girl children from Muslim youth.

‘Love Jihad’ is an unsubstantiated claim first raised by right-wing Hindu outfits that Muslim men lure Hindu women, marry them and convert them into Islam. Minister of State for Home G Kishen Reddy, while replying to a query in the Parliament in 2020, said that no ‘Love Jihad’ incidents had been reported from Kerala.

The catechism book describes several ways being used by Muslim youths to lure Christian girls. The book also urges believers to inform the diocese's helpline numbers if they know someone has fallen prey to the 'love Jihad'.

Ending a controversy
The diocese has prescribed the controversial book for students attending catechism lessons in Class 10, 11 and 12.

Ever since the book's content became public, several religious and progressive organisations have raised their apprehensions. The issue even threatened to vitiate the communal harmony, but timely intervention from the bishop, Muneer and Christian and Muslim religious leaders helped to end the controversy.

They sat together and discussed the issue on Friday. Muslim leaders aired their grievances, while their Christian counterparts listened to them carefully. The discussion ended amiably in the evening with the bishop announcing that all the controversial portions from the text would be removed soon. He also apologised to Muslims for hurting their religious sentiments.

"We have decided to remove all controversial portions from the text book. The meeting, chaired by MK Muneer, has also decided to foster religious harmony and work against social evils," the bishop stated in a press release issued in the evening.

The amiable settlement undoubtedly was a huge morale booster for Muneer, who took the initiative to bring leaders from both sides to the discussion table. Thamarassery comes under his Koduvally constituency and he shares a good rapport with bishop Remegiose Inchananiyil.

Muneer told Onmanorama that the bishop was unhappy after the book had raised a storm. "When I suggested this discussion to settle the issue, he offered me full support. I am happy that the issue has been settled once and for all," he said. The success of the talks appears to have given Muneer a political edge in his party as he brought leaders of all major Muslim outfits - EK and AP Sunni factions, Kerala Nadvathul Mujahideen and Jamat-e-Islami - for the discussion. "I have taken my party's permission before proposing the talks," he said.

Hurting religious sentiments
The book was published by the Department of Catechesis of the Thamarassery dioceses.

Its director Fr John Pallikavayalil told Onmanorama that the Church had no intention to hurt anybody's religious beliefs. "We decided to omit certain portions from the book as we realised that it had hurt sentiments of our Muslim brothers," he said. 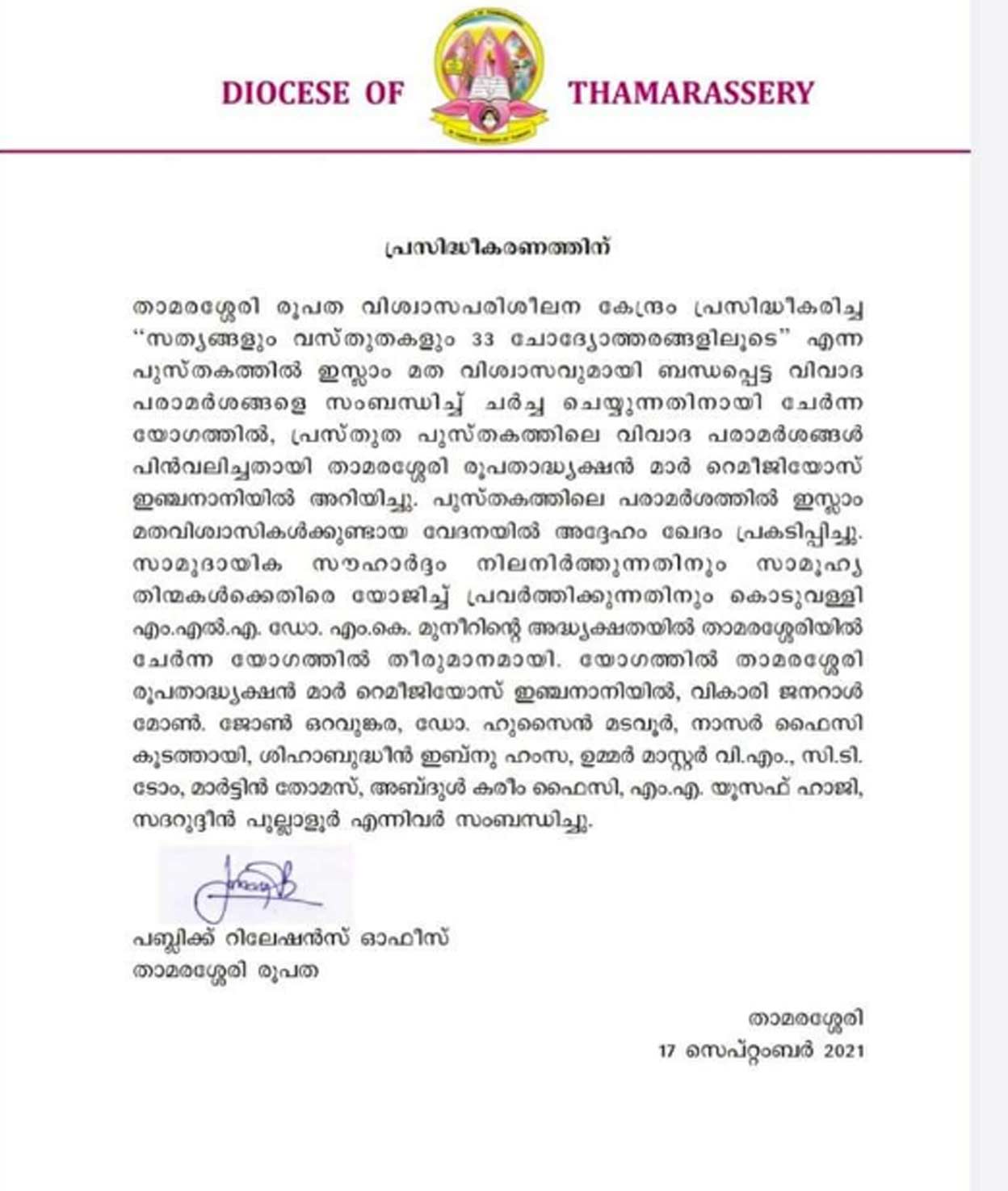 He described the circumstances in which his department published the book. "Many people had urged us to inform students and parents about hate campaigns against Christianity and sexual exploitation of Christian girls. So the book has been published to retain Christian youngsters in their faith and protect girls from sexual exploitation," he said.

Fr Pallikavayalil said the diocese does not encourage hatred against a particular religion or faith. "We adhere to Pope Francis’s teachings on global religious harmony," he said

Muneer believes rifts between religious outfits and people should be resolved through dialogue. "We are living in a difficult period where hate rules the roost. But I believe dialogues can resolve all crises. We should try to unite people, not to divide them," he said.