The ripple effect of the ongoing protests on campuses across the country has reached foreign shores with students of prestigious universities across the world including Oxford, Harvard, Yale and MIT also staging demonstrations against the police crackdown on students of Jamia Millia Islamia and Aligarh Muslim University (AMU).

Over 400 students from different US universities have issued a joint statement expressing solidarity with Jamia and AMU students lathi-charged by the Delhi Police during protests against the Citizenship (Amendment) Act that turned violent.

Describing the right to protest as "a cornerstone of constitutional democracy", the statement said, "any use of force by law enforcement must be within the strict confines of the principles of legality, legitimacy, necessity and proportionality under International Human Rights Law."

They also demanded "an immediate, independent, and robust investigation into the abuse of power by the Delhi Police, Uttar Pradesh Police, and the Central Reserve Police Force".

The students and scholars at Oxford University staged a protest march to India House in London against the Citizenship Amendment Act and the police action on students.

"We condemn the violence unleashed on students in Jamia and AMU among other Indian institutions. The use of police force against students exercising their fundamental right to protests in the university spaces and elsewhere is a direct attack on foundations of a democratic society," according to a joint statement issued by students, scholars and alumni of the University of Oxford.

And here are @UniofOxford students reading the Preamble of the Indian Constitution, reminding the govt that protestors are merely asking for the constitution to be honoured.

And isn't it ironic that we live in times where we are reading our Constitution as a mark of dissent! pic.twitter.com/7egGOePqjb

"We also lend our voices in support of the fight against this immoral and unconstitutional law and call for its immediate withdrawal," it added.

Similarly, students and scholars at Harvard University have also written an open letter to the Indian government saying, "we are deeply shocked and concerned about reports of police brutality aimed at breaking the spirit of protesters especially women. It is important to note that these events are in violation of rights to due process, public association and dissent".

Great energy at the protest against #CitizenshipAmendmentAct and #NRC by #Oxford students. In solidarity with students of Jamia Millia Islamia, AMU, DU and other protesting student organisations across India. @Nikita_azad @mehartweets @sameeric @h_tejas https://t.co/i7bILow3EX

"Protests are inconvenient and disruptive, but they sustain the secular and democratic fabric of our nation. The violent suppression of protesters by the police, the use of teargas, lathi-charges, and physical assault in response to peaceful dissent, and the police forces' forceful entry into university campuses and consequent Internet blockades there are all deeply reprehensible," the letter said.

Students and teachers at Columbia University also issued a solidarity statement and have planned a protest march.

"The brutalisation of students and the attack on universities is against the fundamental norms of a democratic society. As teachers, students, scholars and members of civil society across the world, we are watching with extreme concern the situation unfolding at Jamia and AMU. We refuse to remain silent at the violence unleashed on our colleagues peacefully protesting the imposition of a discriminatory and unjust law," the statement said.

Similar demonstrations were seen by students at Massachusetts Institute of Technology (MIT) where a silent march was taken out with participants holding posters saying "Merry Crisis and Happy New Fear".

'UCU offers solidarity to students and academics engaged in peaceful protest across India. We urge the Indian government to fully investigate allegations of violence and sexual harassment by police against students.'

Several protests - some peaceful, some violent - erupted across India on Monday as students and political leaders took to the streets, even as Prime Minister Narendra Modi called these protests "deeply distressing" and appealed for peace.

The students also condemned the use of violence against protestors in Assam where five people have died.

"This combined with the unlawful denial of access to the internet in the state has completely blocked news reports of events on the ground, including the ability of the protestors to represent their demands and report unlawful police action," it said.

Unbearable to watch but we must: listen to thvoices of our assaulted students, their pain&bewilderment that this is happening to them in what they grew up thinking of as a democracy. This government has taught us a valuable lesson: don’t take your freedoms for granted.Resist! pic.twitter.com/Z8UPX8Ccna

The statement demanded that student protestors be allowed to continue to protest peacefully.

We condemn the NRC, CAA and Trans Act and are horrified by the brutality that has ensued over peaceful protests. We have created a repository to collate and publish posters and communication material that educates and opposes these dangerous bills. https://t.co/Rh6kPQur1W

The whole world has been watching India for the past few days as the protests over the Citizenship Amendment Act (CAA) raged across campuses and on the streets even as the law enforcers dealt with them firmly.

To expose police action, human rights organisations were tagged by the enraged youth in videos and photos.

The latter have expressed their unease with the Citizenship Amendment Act as well as the equally controversial National Register of Citizens (NRC). The way in which the government is handling the protests has also been condemned.

Amnesty International condemned the police brutality on Jamia Millia Islamia and other universities around the country. It also said that the new Citizenship law “legitimises discrimination based on religion”. Closing the door on refugees based on their religion, it said, “reeks of fear-mongering and bigotry”.

The Executive Director of Amnesty India, Avinash Kumar, said that the amendments “clearly weaponise the NRC against Muslims”. He also said that the Government of India must order security forces to “stop using lethal measures against protesters” and that “the right to live must be protected at all costs”. 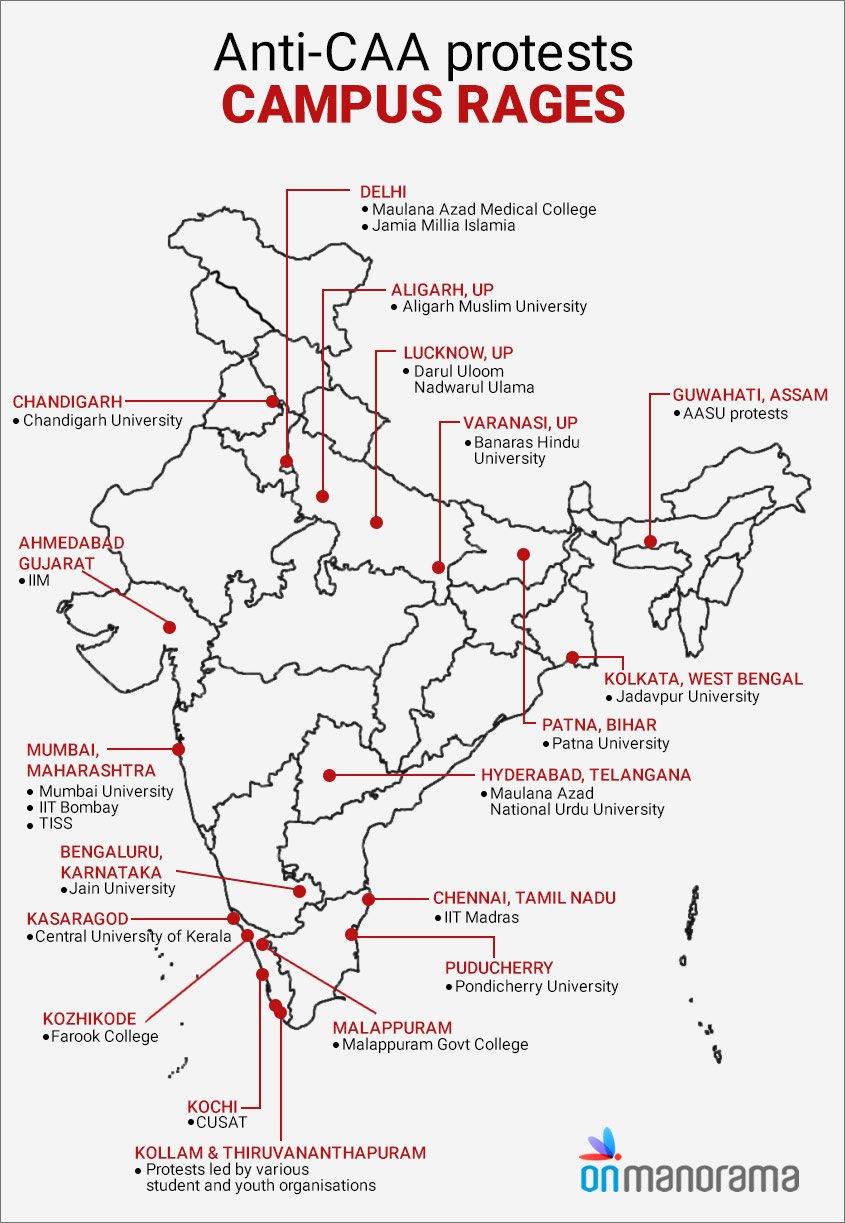 The UN has also conveyed its concerns about the new citizenship law. UN Secretary-General, Antonio Gutteres is concerned with the “alleged use of excessive force”, said Stephane Dujarric, Spokesperson for the Secretary-General.

India is witnessing widespread protests over the enactment of the Citizenship Amendment Act. It aims to give Indian citizenship to illegal migrants who are Hindus, Sikhs, Buddhists, Jains, Parsis and Christians from Afghanistan, Bangladesh and Pakistan.

Tags:
MORE IN NEWS
LOAD MORE
The comments posted here/below/in the given space are not on behalf of Onmanorama. The person posting the comment will be in sole ownership of its responsibility. According to the central government's IT rules, obscene or offensive statement made against a person, religion, community or nation is a punishable offense, and legal action would be taken against people who indulge in such activities.
https-www-onmanorama-com-news https-www-onmanorama-com-news-world 75o0osvvhr0milrtg3b2ql8qaf https-www-onmanorama-com-acp onmanorama-topic-general-topics-9-citizenship-amendment-bill manoramaonline-english-news-news-15-nation-7-15-oxford-university onmanorama-topic-organisation-4-harvard-university