Dubai: They stand on the opposite ends of IPL's success spectrum but there is little to separate between Mumbai Indians and Delhi Capitals in the tournament's 13th edition as they head into a blockbuster first qualifier here on Thursday.

The team to beat in the league stage, four-time winners Mumbai lost a bit of their momentum after a 10-wicket defeat to Sunrisers Hyderabad on Tuesday.

The biggest positive for Mumbai has been the return of skipper Rohit Sharma, who had missed four games to recover from a hamstring injury. The star opener, though, perished cheaply against SRH and needs to come good on the big day.

The defending champions boast an explosive batting line-up coupled with an equally lethal bowling attack, but the batters had an off day against SRH.

Their bowlers too were taken to the task - a wake-up call before the crucial game.

Delhi's middle-order has been sluggish and heavily dependent on one or two batters. 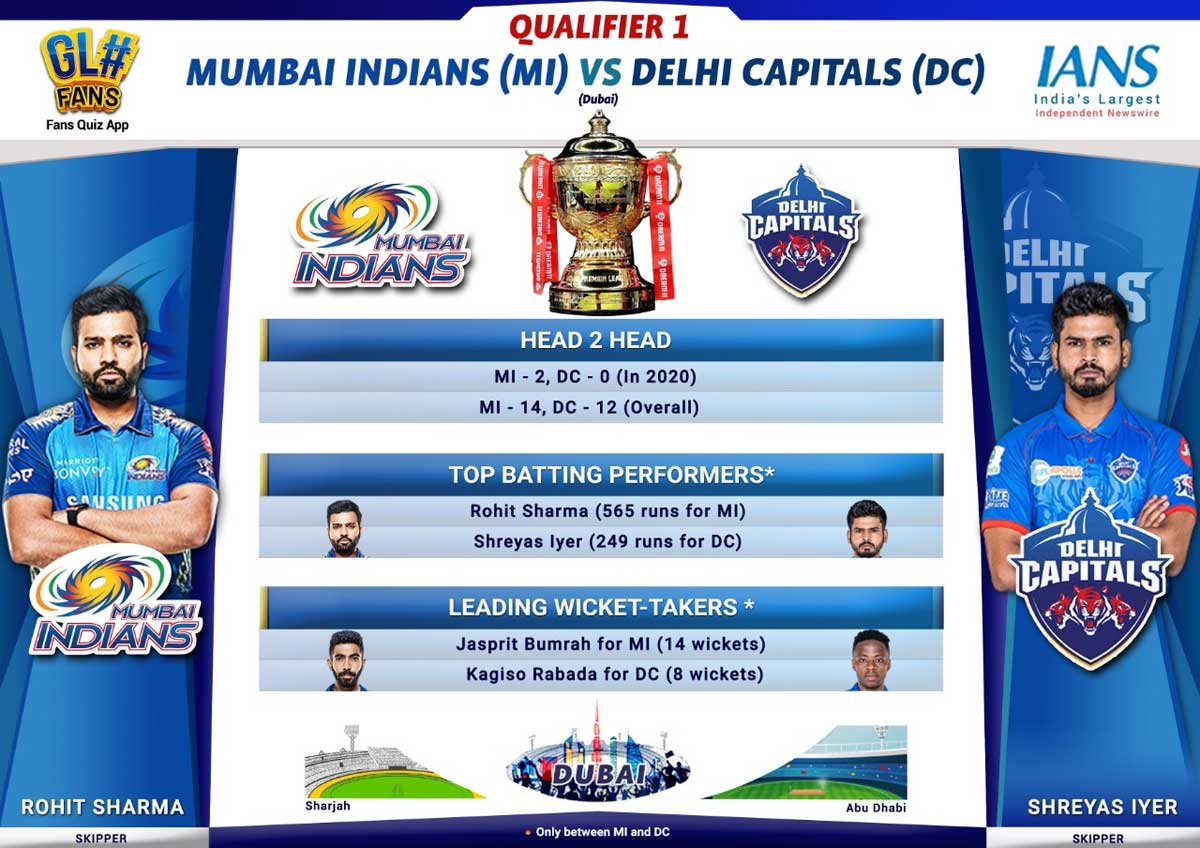 Mumbai top-order has been firing on all-cylinders and young Ishan Kishan (428 runs) has been a revelation. Quinton De Kock (443) would be keen to continue his sublime form while opening with Rohit.

And so would Suryakumar Yadav (410), who has played some scintillating knocks.

Pollard's six-hitting ability was on display again when he plundered four maximums against SRH. The three could prove to be the difference.

Mumbai rested key bowlers - Jasprit Bumrah (23 wickets) and Trent Boult (20 wickets) - against SRH. Both have been lethal at front and at the death.

Spinners Rahul Chahar (15 wickets) and Krunal (5 wickets) will need to forget the hammering they received from David Warner and Wriddhiman Saha before taking on DC.

On the other hand, Ajinkya Rahane (111 runs) is back among runs after scoring a match-winning 60 against RCB.

Shikhar Dhawan (525) has been in blazing form, with two hundreds and three fifties, but will need support from others in a big game.

A major cause of concern is the form of two youngsters -- opener Prithvi Shaw (228) and Rishabh Pant (282) - who haven't lived up to their true potential. So has been the case of their key overseas players - West Indian Shimron Hetmyer (138 runs) and Marcus Stoinis (249 runs).

Skipper Shreyas Iyer (421) will have to play the anchor's role.

On the bowling front, the South African pace duo of Kagiso Rabada (25 wickets) and Anrich Nortje (19) have been exceptional.

Ravichandran Ashwin and Axar Patel have done well to suffocate the opposition teams.

Earlier in the league stage, Mumbai got the better of Delhi twice but Rohit conceded that it is history.

"You keep doing well, I know you want to remember those performances, but it is always nice to forget what has happened and focus on the present," Rohit said.