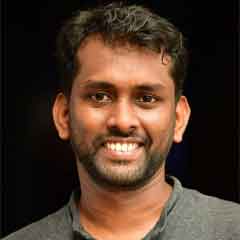 After the match between Brazil and Serbia, we headed to Mixed Zone, the FIFA-designated area inside the stadium where journalists get to interact with players after a match.

From a distance, I could see somebody in a wheelchair with one leg heavily bandaged.

No, it was not Neymar. It was a woman scribe – Christina - from Lebanon.

She hurt her knee after falling down from the media tribune gallery while watching the match between France and Australia. She was in pain, but it seemed she was more concerned about Neymar's injury!

"Is there any update on Neymar?" Christina asked me.

The journalists from Brazil, who huddled together in a corner, looked dejected.

When I saw the familiar face among them, I went to him and inquired about Neymar. "Coach Tite and the team doctor will soon meet the press," he said.

A group of Serbian players passed through the Mixed Zone, but the scribes were glued to the television, looking for updates on Neymar. "Neymar has an injury on his right ankle. It will take at least 24 hours to ascertain the exact extent of his injury," the team doctor's words only helped fuel more speculations on the player's condition. Coach Tite, however, sounded quite optimistic.

Captain Thiago Silva and goalkeeper Alisson Becker spoke at length on the team's comfortable win over Serbia. In the meantime, the nimble-footed Vinícius Junior dribbled past the scribes! Dani Alves, the senior-most member of this Brazilian squad, was seen hugging a Spanish journalist.

She works with Spanish daily Mundo Deportivo and was very close to Alves during his days at Barcelona FC. This was their first meeting after Alves left Barca and joined Mexican club Pumas.

Finally, Neymar entered the room, but as he was in serious discomfort due to pain, he hobbled through the mixed zone, not stopping for anyone.

There is only one reason why Brazilians are worried about Neymar's condition.

Tite may have so many attacking options to choose from in the upcoming matches, but there is no substitute for Neymar's creativity and fluidity.