Kerala's cultural capital on Tuesday witnessed the epitome of craftsmanship and art with the famed Thrissur Pooram enthralling masses in its complete splendour and glory after a two-year-long hiatus.

An entrancing percussion performance followed by an enchanting parade of elephants accompanied by ornate parasols delivered a visual treat to thousands gathered at Thrissur's Vadakkunnatha Temple grounds in the evening.

The festival which kick-started last Wednesday with the ritualistic flag hoisting at two temples reached its peak today with a veritable percussion feast and the majestic sight of 30 of the most famous elephants in Kerala lined up in all their finery.

With two teams competing to create a stunning spectacle with bright, embellished parasols with intricate designs, the nature also decided to take part in the visual treat. Light showers blessed the dense crowd during Kudamattam, giving a quick respite from the hot and humid May weather. The raindrops falling under the spotlights lit at both ends of the ground made it look fairy dust - giving the event a mystical aura.

Pooram, resplendent with caparisoned elephants in accoutrements, display of colourful parasols, percussion music and fireworks display, has been an integral part of the State's culture and pride.

The festival held annually at the Vadakkunnathan Temple in Thrissur, which is popular for huge gatherings, had been scaled down the last two years due to the pandemic. In 2020, only the rituals were held as part of the pooram. The procession as part of the festival, and rituals, were held with limited people in attendance in 2021. This year, however, the festival is being held in full-fledged manner since the Covid numbers have come down drastically in the state. 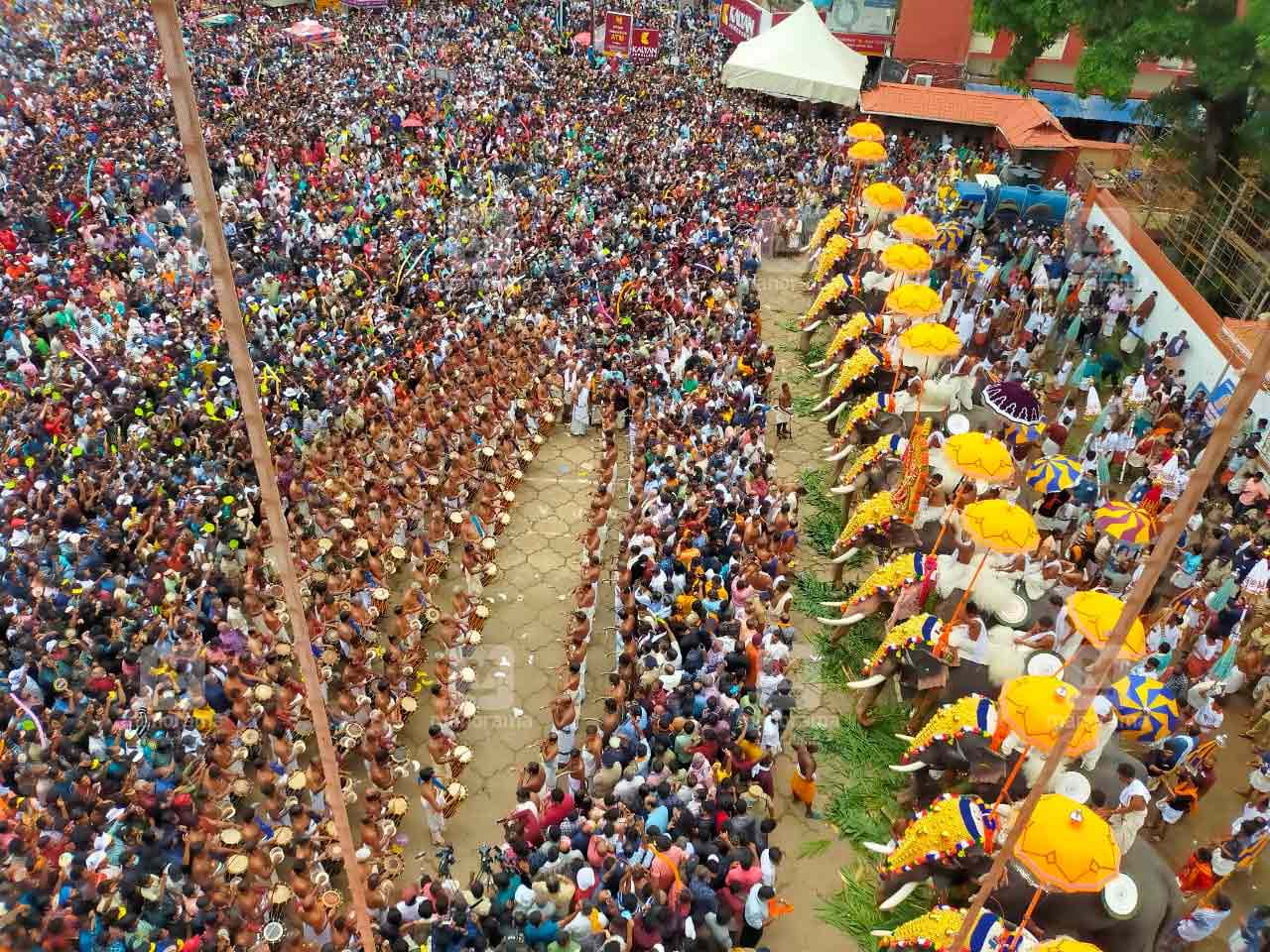 The percussion events started with Panchavadyam – an orchestra of five instruments; followed by Chempadamelam – a special performance with traditional percussion instruments; popular Ilanjithara Melam – an assembly of percussion performance artists held next to the Ilanji tree (bullet wood tree) at the courtyard of the Vadakkunnathan Temple; and to cap them all is the 'Madathil Varavu’ – a conglomeration of over 200 artists accompanied by instruments like thimila, madhalam, trumpet, cymbal and edakka.

After the Kanimangalam Sastha's ceremonious entry at 7 am, processions of deities from the associated temples arrived. The 'Panchavadyam' denoting 'Madathil Varavu' at Pazhayanad Kaavu began at 11 am. Kongadu Madhu led the ensemble. Paramekkavu Bhagavati was brought out in a procession at 12.30 pm accompanied by 'Chembada melam' by maestro Peruvanam Kuttan Marar and his team.

The famed Ilanjithara Melam began at 2.50 pm at the western side of Vadakkumnatha temple. Thiruvambady's 'Pandi Melam', led by Aniyan Marar, added to the excitement.

The Melams drummed up the excitement before Kudamattam – the competitive exchange of colourful, decorative parasols atop 15 caparisoned elephants each, representing the two Devaswoms, at the southern entrance.

After the Ilanjithara Melam, both Paramekkavu and Thiruvambadi groups entered the temple through the western gate, come out through the southern gate and array themselves face to face in distant places where they challenge each other by displaying intricately decorated parasols.

The fireworks display was scheduled to begin at 3 am on Wednesday.

The festival ends with a farewell ceremony called 'Upacharam Cholli Piriyal' at Swaraj Round. Thiruvambadi Sri Krishna Temple and Paramekkavu Bagavathi Temple idols are taken from the Swaraj Round to their respective temples to mark the end of the Pooram celebrations.

The festival ends with a display of fireworks known as Pakal Vedikkettu.

Police had made special arrangements for women attending the Pooram. A separate, secure space was demarcated for women and children near the southern entrance, in front of the police control room.

Toilet facilities were arranged behind the control room, near the Nehru Park entrance, and behind the General Hospital. Women needing assistance may contact Pink Police over the number 1515.

Besides three teams of Pink Police, five Bullet patrol teams, too, were in the city. Kudumbashree had set up She Taxi stands at Sakthan Stand, Patturaykkal and Railway Station.

Police had made elaborate arrangements in the city for the safe conduct of Thrissur Pooram. City police commissioner said a huge raft of police personnel, including Thunderbolt commandos were deployed.

The National Disaster Response Team, and Evacuation Team had been deployed to meet any eventuality. As many as 3,611 police personnel were deployed. Additionally, a 400-member reserve police team, too, was kept ready.

Another 499-member special team under ACP B K Raju was also on security duty. Two additional Superintendents of Police, 18 DySPs, 34 Inspectors, 100 Sub-inspectors, 1105 Civil Police Officers (CPOs) and 40 Women CPOs had been stationed to oversee the security during 'Kudamattam.'