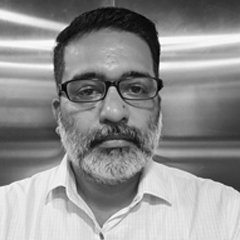 It is not unusual to see vloggers feature Kerala cuisine in videos during their travel through the state. But it was a pleasant surprise when a young Pakistani YouTuber featured a quintessential Malayali preparation as a Sunday brunch dish.

Afzaal Arshad, an electrical engineer-turned-chef who runs one of the most popular YouTube channels in Pakistan called Kun Foods, featured chicken chukka and bun porotta in his latest video. Since the video was uploaded on Sunday, it has garnered over 1,28,000 views and over 40,000 likes.

Speaking to Onmanorama over the phone, Arshad said that he first experienced the richness of Kerala cuisine when he was working in Dubai. “After my graduation in electrical engineering, I went to work with contracting companies in Dubai. We were put up in Sonapur area in Dubai. The region houses many from across south Asia and has many restaurants catering to Indians and Pakistanis. We used to try different food and that's where I first had chicken chukka (chukka is the Malayalam version of sukha or dry) and bun porotta,” he said.

“Though bun porotta is more famous in Madurai town, I really like its pairing with chicken chukka,” Afzaal said.

For sure he is no stranger to chicken dishes, but what he found fascinating was the use of fried onion or birishta to marinate the chicken. “In Pakistani preparation of chicken sukha we don't use birishta. Use of fried onion gives it a caramelised sweetness to the dish,” he said with the explainer voice that he uses in his videos.

“It has a distinct taste when it is fried in coconut oil as they do in Kerala,” he says in the video.

It is his penchant for explaining that brings more people onto his channel. As one Pakistan YouTuber said, “yeh chemistry, biology sab sikhate hein cooking se (he teaches Chemistry and Biology through cooking).”

“Afzaal Arshad's Kun Foods channel is one of the best for Lahori/desi food on Youtube. Partly my punjabi bias at play here but he really is a great presenter,” (sic) tweeted another.

Though he was trained as an electrician, cooking was his hobby (shauk, he said). So when he ended his Dubai life, he returned to Pakistan and started a fast food stall on wheels. He named it Food Rikshaw and started filming how he prepared, sold and kept the account of his business.

This was a success that gave him the impetus to start his cooking channel Kun Foods.

Hailing from Bahawalpur district in southern Punjab in Pakistan, Afzaal takes his 1.82 million (over 18 lakh) subscribers to famous cities and nondescript of villages of the country. He breaks down complex recipes while retaining the zing of deshi tadka. And that sets him apart from the multitudes of other similar channels.

Not afraid to experiment with flavours, he is honest enough when a dish doesn't turn out as he has experienced in a restaurant. As in the case of bun porotta, he readily admits that “it's still not perfect as they make because they are experts in it. But the layers have come nice.” This honesty has endeared him to his viewers.

Afzaal said he distinctly remembers the variety of non-vegetarian breakfast dishes in Kerala cuisine. “For us Pakistanis, our breakfast menus are limited to rotis, paranthas and chai. But you have more varieties from uthappam to appam and puttu. The curries are also amazingly different from our cuisine,” he said.

Many of his viewers are from India. “Yeah, I get many comments from India. They even asked me to visit the country. Hopefully, I will come to India and experience the varsity of its cuisine world," he said.