This is unheard of in the history of Congress party in Kerala. The party celebrating 'Navathy' (90th birthday) of one of its leaders. Former KPCC president Thennala Balakrishna Pillai has now been bestowed the honour – not even the most dominant of Congress leaders, K Karunakaran, was feted on his 90th birthday.

The celebrations kicked off with a public meeting inaugurated by KPCC president Mullappally Ramachandran at Thennala's ancestral house at Sooranad in Kollam district on February 20. A series of cultural and political events will then culminate in a massive public function to be held at Sooranad on March 8. Chief Minister Pinarayi Vijayan, CPI state secretary Kanam Rajendran, Opposition leader Ramesh Chennithala and film actor Mammootty will be the guests of honour at the event.

The 'Navathy' celebrations also look like a late attempt of the Congress party to make up for the injustices done to the man. The biggest injustice was heaped on him on May 17, 2001, the day A K Antony was sworn in as Kerala's chief minister. The UDF had won a record 101 seats to trounce the LDF.

Such a stupendous win, it was clear, was not possible had Thennala not been the KPCC president. Still, on the day of the party's biggest win, the man most responsible for the triumph was asked to step down. And Thennala did so with a composure that Congressmen can now recall only with a sense of disbelief. “Nobody else could have been as selfless,” said Congress leader Pandalam Sudhakaran, a staunch K Karunakaran loyalist.

Journalists had then did their bit to pry open the outgoing KPCC chief's heart. “Are you stepping down with a wounded heart,” he was asked. “I cannot be wounded,” pat came the reply, but he said this softly and with a smile.

When the call from the 'high command' came, Thennala was in a Bata showroom in Thiruvananthapuram. A true Gandhian, he had done a lot of walking during the campaign and, by the end of it, he was badly in need of a new pair of slippers. Pandalam Sudhakran, then one of the KPCC general secretaries, was the only leader with Thennala.

To ensure 'group balance', it was already agreed upon that once A K Antony becomes the chief minister Karunakaran's son K Muraleedharan would take over as KPCC president. So, it was not as if Thennala was shocked. At the most, he would have been jolted by the swiftness with which the 'death sentence' was sought to be carried out. But there was nothing in Thennala's behaviour that suggested he was.

Thennala politely told Vora and Azad that he had no problem. “He drove straight to the KPCC headquarters and lost no time to draft a resignation letter,” Pandalam said. Journalists who had covered the event said the KPCC headquarters was deserted. “Most leaders were at the swearing-in ceremony or around Muraleedharan raising slogans for the KPCC president designate,” said Pradip Pillai, who covered the events then for Malayala Manorama. “Pandalam Sudhakaran was the only Congress leader with Thennala,” Pillai added. 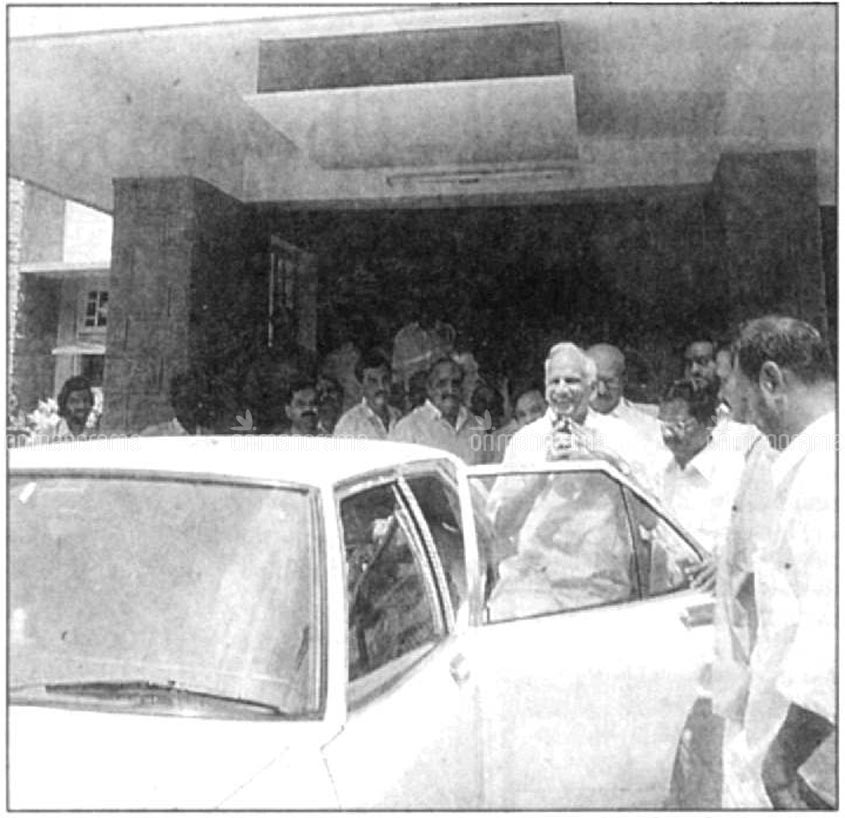 A staunch Karunakaran loyalist, Pandalam told Onmanorama that even at that time he had felt Thennala should not have been treated in such an unfair manner. “He did wonders for the party, he could have at least been given some more time. Karunakaran was adamant but Antony could have told the high command that there was no need for such a hasty transfer of power. He didn't,” Pandalam said.

Thennala was paying the price for his non-aligned stance. He was neither Karunakaran's man nor Antony's. He was Congress's bold loner.

Man of the moment

Congress leader Sooranad Rajasekharan, another known Karunakaran loyalist, used a single word to describe what the party had done to Thennala: “Cruelty”. “After what he had done for the party, this was not how he should have been replaced. It was true that at that time none could go against the Leader's (Karunakaran's) diktats but the party could have at least given Thennala sir a post that matched his stature. Many junior leaders were made governors, not Thennala sir,” Rajesekharan said.

In 1998, when Thennala was made KPCC president, Congress faction rivalry was at its worst. Three years ago, in 1995, the Antony faction led by Oommen Chandy had used the ISRO spy case to unseat Karunakaran and replace him with Antony. Revenge was the only thing in Karunakaran's mind. Sonia Gandhi appointed Thennala as KPCC chief with the specific brief to put the “house in order”.

Sooranad Rajasekharan, who was then the Kollam District Congress Committee president, had a ringside view of how Thennala enforced order. “He revived all mandalam and block committees that had ceased to function as a result of factionalism. Since Congress workers knew he came with no personal agenda of his own, Thennala's decisions were accepted without a murmur. No one, not A K Antony or even Leader, questioned them,” Rajasekharan said.

When it came to candidate selection, Thennala formed a two-member committee made up of the DCC president and another top Congress leader in each DCC. If the DCC president was from the Karunakaran faction (like in Kollam where Rajasekharan was the president), the second person would be from the A group (in Kollam, it was Antony loyalist Kodikkunnil Suresh). “He then asked us to pick the candidates. It was not his nature to suggest any names but would make sure that the two-member committees picked only that candidate who had the highest chance of winning. He supervised us with a sharp honest mind. If he thought a candidate we had picked had less chance of winning, he would veto it. Even Leader had to go by Thennala's logic,” Rajasekharan said.

Rajasekharan remembers how once in his presence Karunakaran had called up Thennala and asked him to place a person his faction leaders wanted in a top position in Pathanamthitta DCC. “Thennala bluntly told Leader it was not possible,” Rajasekharan said. Karunakaran did not press the matter further.

Frustrated, some of these local leaders indirectly expressed their ire during a party meeting saying that even the Leader's wishes had no value in the party. Realising the barb was meant for him, Thennala said: “Then ask the Leader to remove me and post a better person.” No one then dared utter words that could be seen as offensive to Karunakaran, Rajasekharan said.

These leaders conveyed what Thennala said at the meeting to Karunakaran. “It was Karunakaran's response that surprised me. 'Thennala is the party's only Harishchandra and I don't intend to cross him,' the Leader dismissed them,” Rajasekharan said.

INTUC chairman and one of Karunakaran's closest aides, R Chandrasekharan, felt Thennala was given a raw deal. Chandrasekharan is also one of the chief organisers of the Navathy celebrations. “The Leader had every right to insist on a change of guard as group politics had unfairly pushed him out of the chief minister's chair twice. (Once in 1977 when he was indicted in the custodial death of college student Rajan during the Emergency and then in 1995 at the height of the ISRO spy controversy.) But all of us were sad that the best of our leaders had to be sacrificed for this. Many of us who were with Karunakaran wanted Thennala sir to be given more time so that he could make a graceful exit,” Chandrasekahran said, and added: “This was a man who had never done anything for personal gains.”

Wishes were ignored and Thennala let go of his grip on the party without so much as even a sigh. Soon enough factionalism intensified and three years later, in 2004, Congress president Sonia Gandhi had no choice but to reappoint Thennala as the KPCC president.

Tags:
MORE IN KERALA
LOAD MORE
The comments posted here/below/in the given space are not on behalf of Onmanorama. The person posting the comment will be in sole ownership of its responsibility. According to the central government's IT rules, obscene or offensive statement made against a person, religion, community or nation is a punishable offense, and legal action would be taken against people who indulge in such activities.
https-www-onmanorama-com-news-kerala 7naju7b6t9kcqm9khp2eeavos9 onmanorama-topic-person-21-k-muraleedharan 4jttg7ap7t2rfcgr2tra8lbcmn onmanorama-topic-organisation-6-kpcc https-www-onmanorama-com-acp onmanorama-topic-person-21-k-karunakaran