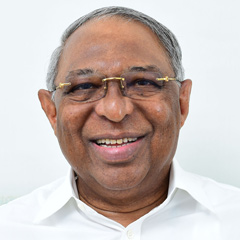 I met M P Veerendra Kumar for the first time during the Sait Nagji Football Tournament in Kozhikode. That was the beginning of a friendship that lasted a lifetime.

I arrived in Kozhikode as the Resident Editor of Malayala Manorama in 1970. As there were no floodlit football grounds then, matches were held in the afternoons.

Veerendra Kumar, who had made a mark by then as a Socialist leader, had arrived with compatriot Arangil Sreedharan to watch the game. They watched the match puffing cigarettes one after another.

That was the most challenging period of establishing Malayala Manorama in Kozhikode. Mathrubhumi was already a force to reckon with in Kozhikode with K P Kesava Menon as the chief editor and V M Nair as the managing director.

After V M Nair, M J Krishna Mohan became the managing director. But Veerendra Kumar had to take the mantle following the untimely death of Mohan.

Veeran, as he is fondly addressed by the people, stepped into the administrative role when Mathrubhumi was facing a lot of issues, including labour strikes.

Many raised apprehensions about how a coffee planter-cum-politician would run a newspaper. Being a fiery warrior, Veeran took it as a challenge and brought in many changes at Mathrubhumi.

The MBA graduate from the famous Cincinnati University at Ohio in the United States spearheaded the modernisation drive at the newspaper and hence played a historic role in Mathrubhumi's transformation.

When he took up the mantle of managing director, Veeran told me, "Mammen, Manorama has a successful history in newspaper management. I am newbie in this world. You should help me. Mathrubhumi had undergone several trials and tribulations to grow as a newspaper. I pray and hope that this would not be destroyed because of me. You should stand by me."

I gave him my word, "There will be no dearth in support from my side."

Veeran had often sought advice on running a newspaper from my father K M Mathew. I was also present on many such occasions. Probably because of those experiences, Veeran had declared, during a meeting at Malta, that K M Mathew was his guru in media world.

Once Veeran came down to Kottayam to meet my father. After the interaction, he called on me. Probably drawing inspiration from my father's words, he said to me, "Mathrubhumi will become strong one day. And we will compete with Manorama. However, that fight will be between the newspapers, Mammen. Never between us."

Veerendra Kumar kept his word until the last.

I was accorded a national honour in 2005. Veeran was the first person to congratulate me. "Mammen, I feel as elated as if I had won the award. I will celebrate it here."

Veeran had suffered defeat in a Lok Sabha election. He misunderstood that he had lost out on some minority votes due to a statement appeared in a Manorama report. My father and myself tried to clear this over the phone several times, but to no avail. After some time, he realised that it was indeed a case of misunderstanding.

He was back at my father's place and feasted on a vegetarian 'sadya' prepared by my mother. His wife Usha was also witness to that happy reunion. Veeran realised that we would never try to put him in a spot. That realisation marked the strong bond between our families.

'I am a political animal'

When Veeran was contesting the 2014 Parliament elections as a UDF candidate, I asked him, "Isn't it better to seek a Rajya Sabha seat? Do you really want to go out and campaign in this blistering heat?"

He laughed. Then with confidence and pride, he said, "Mammen, I am a political animal."

Those were the fiery words of a person, who had been battling on in the tumultuous world of politics for several decades.

After the campaigning, he called up me and my brothers Philip Mathew and Jacob Mathew, and said, "I got more support from Manorama than Mathrubhumi. Thanks a lot."

On that same day, LDF candidate M B Rajesh called up the then Palakkad coordinating editor Roy Philip and said, "Really grateful to Manorama for the media coverage."

I was doubly elated to note the words of gratitude from both the candidates. But Veerendra Kumar lost in that election.

Veeran was also a brilliant orator, voracious reader, and accomplished author. He loved dogs and collected watches for a hobby.

We travelled together to several countries and shared stage on many occasions. We shared several lighter moments as well.

Veeran had three close friends in the media world – K N Shanthakumar of Deccan Herald, N Murali of The Hindu and let me proudly add, myself.

Dear Veeran, this is an ode to our friendship.

Tags:
MORE IN KERALA
LOAD MORE
The comments posted here/below/in the given space are not on behalf of Onmanorama. The person posting the comment will be in sole ownership of its responsibility. According to the central government's IT rules, obscene or offensive statement made against a person, religion, community or nation is a punishable offense, and legal action would be taken against people who indulge in such activities.
https-www-onmanorama-com-news-kerala 3nf5btuiqv2l176qq125ddn5vn 4947b1bqdhun8su7v1u833infd onmanorama-topic-general-topics-25-malayala-manorama https-www-onmanorama-com-acp onmanorama-topic-person-26-mammen-mathew onmanorama-topic-organization-1-mathrubhoomi onmanorama-topic-person-29-mp-veerendrakumar