The origin and story of Brinjal – a globetrotter powerhouse 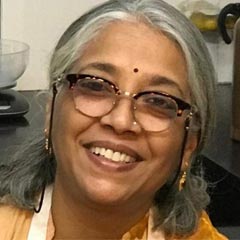 What’s in a name? Eggplant, aubergine, guti, vangun, kathirikai, baigan, begoon, vaingan, khamen, mattu gulla … The list goes on. The usually bright purple-coloured vegetable also comes in hues of green, greenish purple, and even white, and in diverse shapes – slender and long, round and big or sometimes small. Belonging to the Solanaceae family, this edible fruit is grown all over the world. Yes, it is the brinjal.

A quick look at the etymology of baingan or brinjal tells us that this well-travelled vegetable has its roots (metaphorically, as the vegetable hangs from slender branches) in India and Southeast Asia. Vartaku, that’s what the Munda tribe still call it (in Mundari, an Austroasiatic language), says K T Achaya (‘A Historical Dictionary of Indian Food’, OUP, 1998); while the Sanskrit word is Vātiṅgaṇa, besides many other names, depending on the size and colour, like Vartaka, Vartaku, Vantaaki.

Bādingān aka bādinjān was the name, following the homonid expansion from Fertile Crescent to Persia. From there, it reached Arabia, and became al Badinjan – and then Beringela in Portugal probably via the Moors from north Africa, while the Galician (West Iberian language related to Portuguese) named it Berinxela (also Berenxena). Portugal’s neighbour Spain pronounced it as Berenjena. Hence came about brinjal, as we know it today.

But Eggplant, a word you often see in the restaurant menu, has a fun etymology. One smallish variety of this vegetable is white in colour and looks like eggs hanging from bushes – and that perhaps made the Americans give this outlandish name. The British got aubergine via the French which, in turn, came from the Arabic al Badinjan.

So that’s how the world got brinjal – in various languages as well as the paleobotanical evolution that started from this subcontinent. “The cultivation and use of brinjal (eggplant/aubergine) is of great antiquity. It is from India, as the philological studies indicate, that the brinjal moved to West Asia and Europe ... different regions of India offer diversity of accounts,” write Ramesh V Bhat and S Vasanthi in their paper ‘Antiquity of the Cultivation and Uses of Brinjal in India’ (published in the international quarterly journal Asian Agri History Vol 12, 2008).

In 2010 CE, a group of scientists from Washington State University picked up shards of pottery and more from Farmana near Rakhigarhi in Haryana, about 150 km from Delhi – one of the largest Harrapan site relating to the Indus Valley Civilisation (2600-1900 BCE) in India. On analysis, they found remnants of cooked aubergine.

The archaeological find in Rakhigarhi puts a 4000 BCE timeline to aubergine as food in the Southeast Asian region of India and Pakistan. From here, it reached China in the east and to Egypt and Turkey in the west. Wherever it went, royalty as well as commoners enjoyed the vegetable. The Turks alone have a large number of recipes using aubergine in many different ways. In the 17th century, Louis XIV of France introduced the aubergine to his garden, and the royal table.

In Chaitnya Charitramrita (Caitanya caritāmṛta), a poetic ensemble composed by Krishnadasa Kaviraja in circa 1557 in Bengali with Sanskrit verses, describes a feast that starts with ‘Komol nimba patra bhaja saha vartaki’ (tender neem leaves fried with brinjal). The vegetable finds mention in Buddhist and Jain texts like Uttaradhyana Sutra and Jatakas, as well as Tamil literature and various other texts.

India grows a rich variety of aubergine – white, light green and various shades of purple; long or short, round or oblong. Each has its own culinary magic. The light green oblong shaped ones are best deep fried with a dash of salt. The melt-in-mouth fries can be had with roti or rice. A food buff will tell you, nothing else needs to be added. These fried aubergines can be pickled, bottled, and carried while travelling.

If Manipur has its small round variety of Khame Akhaba, there’s Samṭawk in Mizoram, and Titay bii, or simply bii, in Darjeeling, Sikkim and Nepal which is a slightly bitter variety of the tiny round green variety. It is relished in several ways – sauteed, boiled, raw, and with meat, especially pork.

This vegetable, a staple in all parts of India, needs a warm clime to flower and fruit. In peninsular India, it is grown throughout the year, while there are two sowing seasons in northern plains – June and July and again in November.

Being high in nutrients like vitamin C, vitamin K, vitamin B6, thiamine, niacin, magnesium, manganese, phosphorus, copper, fibre, folic acid, potassium, iron – and low in calories – has made this vegetable acceptable on all plates the world over. Though some are allergic to it, aubergine is believed to be good for gut movement – as it provides fibre, in addition to water and antioxidants, that keeps our digestive system healthy and also helps in relieving constipation. The bitter ones are used to make indigenous medicine for asthma, allergic rhinitis, nasal catarrh, skin infections, swollen joints and in weight reduction medicines.

Nutrition and medicinal values of aubergine are discussed in the 12th century Sanskrit text Mānasollāsa, (aka Abhilashitartha Chintamani), written by Chalukya king Someshvara III, who ruled in present-day Bidar, South India. The five volume encyclopaedia is a treasure trove on medieval south India – each volume having 20 chapters on topics ranging from polity, governance, ethics, economics, astronomy, astrology, rhetoric, veterinary medicine, horticulture, perfumes, food, architecture, games, painting, poetry and music... Recipes include mutton and jackal meat cooked with pieces of brinjal, as mentioned by Bhat and Vasanthi in their treatise ‘Antiquity of the Cultivation and Uses of Brinjal in India’.

This globe trotter vegetable lists high in ‘Luchee Foodstory’ kitchen too – where a favourite is Baingan Bharwa, that is, aubergine stuffed with keema, that is chevon mincemeat (finely chopped goat meat).

Slit the aubergine with the cap intact. Scoop out the flesh. Fill it with cooked keema. Cover and close the slit with a thick layer of chickpea (besan) batter. Deep fry. Now keep the aubergine aside. Make a gravy with the leftover keema and the scooped-out aubergine flesh with onion, tomatoes and garlic. Make it spicy. Make it thick.

Place the aubergine on a flat serving dish. Pour the thick gravy on it. Dress it up with some spearmint (pudina) sprigs.

You can reach Sharmila Sinha at Lucheefoodstory@gmail.com