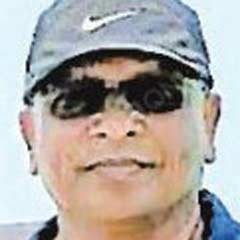 We are going through a phase of extreme turmoil and uncertainty in this tiny land mass of about 32 sq km scattered over close to a million square km of sea.

These tiny islands numbering about 36 in all has just 10 islands inhabited by a population of over 65,000 people. Extending from about 250 km towards the west of Mangalore in the North to about the same distance to the West of Thiruvanthapuram in the South, this area encompasses a vast sea territory which is very important to our country economically as well as in national security terms.

It should be noted that a major shipping lane goes through this area as well as a designated flight path for commercial international air traffic. The area is accessible from all the ports and bases located on our west coast in record time.

The sea in this area right up to Maldives and beyond is called the Lakshadweep Sea.

Point to be noted is that this whole area is under constant and very intense scrutiny of our Navy and Coast guard. It is next to impossible for any intrusion into this area and the security agencies not coming to know of it.

If I remember correctly, there has been just about two or three cases of such incidents so far and all people were apprehended and jailed by our security agencies.

One was an Iranian vessel that was intercepted near Androth waters and another Somali vessel near Minicoy. And, of late, the interception of a fishing vessel with Sri Lankan crew carrying drugs, weapons and ammunition in Minicoy waters.

It is clear now that this boat had collected the contraband from Iran and was headed for Sri Lanka. Notwithstanding these facts, some interested and conceited parties are now blaming the islanders.

These were mostly motorized sailing vessels.

It's an established fact that the shipping lane going through this area is a very lucrative target for potential sea pirates.

That is an added reason why there is such intense scrutiny and surveillance by our security establishment by both sea and air in this area.

Also remember that one of the most strategic bases of the US Navy lies not too far south of this territory in Diego Garcia.

With overall picture of this strategic perspective, we must analyze , why this tiny population of very simple and nature loving people are so important for the overall safety and security of our West Coast.

There is no doubt in anybody's mind that people residing here for centuries have never indicated any disaffection or hatred towards their brethren in the mainland whether from Kerala or Karnataka, as these are the two states that had traditional link with the islanders from time immemorial.

The fact that the majority are Sunni Muslims does not in any way moved them to an extreme school of belief for centuries.

They have always been a subscriber to mainstream political parties and ideology, including that of the BJP, of late.

It should have been a natural choice to embrace any minority political dispensation, but these simple folks actively prevented any religious parties from taking root here. Till date, there has been no report about any sort of extremist ideology being inculcated among the islanders.

It is also pertinent to note that the islanders have been following certain unique cultural practices. Any attempt to interfere with those, in the name of development or tourism promotion, would only hurt the sentiments of the people whose loyalty to the country and its integrity has never been in doubt.

Why is it so important for our friends in the mainland to keep this population in good humour and trust.

It is important that people living in the border areas are kept satisfied and happy for our own selfish security interests.

It is a known fact that the early warning about enemy intrusion into our Kargil area was actually reported by the goat herders or Bhakarwals living in these areas.

The government policy of integrating border dwellers in the overall security apparatus, thus, is very ingenious and important. These simple folks are in practice our eyes and ears in a very porous border.

Will antagonizing and alienating such people serve any purpose? All I can say is that this will add to our security woes, not reduce it in any manner.

Lakshadweep has a very fragile ecosystem with an average height of about 8 feet above sea level and any development that does not cater for sustainability will render it uninhabitable. There are islands that have sunk under the sea in our times.

Many studies have been conducted by teams of reputed environmental and marine scientists and they have suggested a very viable way forward integrating the people at the centre of any such development programme, anything other than that would be dystopian.

It is not that we do not have examples in other parts of the world where corals have bleached and died and the entire marine food chain disrupted leading to people dependent on the marine life losing their livelihood and incomes.

I would, hence urge the powers that be to exercise extreme caution while dealing with issues that affect centuries-old customs and practices of the islanders.

Those in authority should heed to the people who are directly affected by such unscientific, unsustainable and devastating programmes in the name of Development.

It should not happen that nobody is left in these atolls when the deed is done. One cannot rule over a graveyard.

(The author, a native of Androth island, is the first Army officer from Lakshadweep)