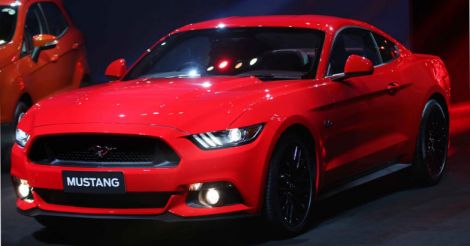 This is the first time in Mustang's 52-year history that the company has launched the model in India. IANS

This is the first time in Mustang's 52-year history that the company has launched the model in India.

The sports cars is powered by a 5 litre V8 petrol engine and delivers power of 401PS. It is capable of reaching a top speed of 250km/hr.

"On our commitment to building a drive for everyone, there's never been a better time at Ford to introduce this iconic car... Mustang is more than just a car," Ford India Executive Director, Marketing, Sales and Service Anurag Mehrotra said.

Mustang will be sold in India as a completely built unit imported from Ford's Flat Rock assembly plant in the US.

Globally, Ford sold around 1.1 lakh units of Mustang in 2015, the first year of global availability of the car, including in right hand drive markets.

Ford, which is present in India via a wholly-owned subsidiary, sells models like EcoSport and Endeavour in India.

In January, Ford had announced its plans to launch the model in India.

Since Mustang went on sale in 1964, Ford has sold more than 90 lakh units of the model.