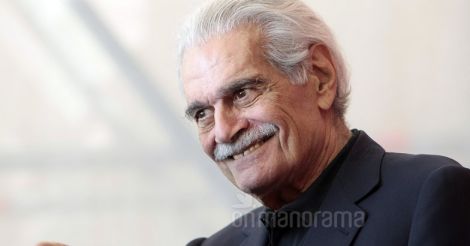 I am deeply saddened by Omar Sharif's death and I write these words with tears in my eyes! He was diagnosed with Alzheimer's in May 2015 and died on Friday afternoon after suffering a heart attack at a hospital in Cairo. He was my hero ever since I saw him in David Lean's Lawrence of Arabia, his first film in the English language!

Who could forget his legendary entrance, riding a camel in the blazing sun. He, as Sharif Ali, gets off the camel and says to T.E. Lawrence (Peter O'Toole) who was drinking water from a well in the desert, "This is my well!" – The rest is history! He won two Golden Globe Awards and a nomination for the Oscar for his role as Sharif Ali in Lawrence of Arabia, and he received a third Golden Globe for the best Actor in Doctor Zhivago in 1965 and a Cesar Award in 2004!

Omar was born Michel Dimitri Chalhoub on 10 April 1932 in Alexandria in Egypt to a Melkite Greek Catholic family from Lebanon. He graduated from Cairo University in Mathematics and Physics and went on to study Acting at the Royal Academy of Dramatic Art in London (RADA). He converted to Islam taking the name Omar Sharif to marry fellow Egyptian actress Faten Hamama in 1955, who remained the 'love of his life', though they got divorced in 1974 – sadly, she too died six months ago. He is survived by a son, Tarek El-Sharif, and two grandsons, Omar Sharif Jr, an actor, and Karim.

His performances in David Lean's Doctor Zhivago with Julie Christie and in Funny Girl with Barbara Streisand shows his brilliance as an actor. The chemistry with Barbara Streisand in Funny Girl was such that Funny Lady was made few years later! MacKenna’s Gold with Gregory Peck and Telly Savalas, Mayerling with Catherine Deneuve, The Tamarind Seed, with Julie Andrews, and Richard Lester’s thriller Juggernaut, Behold a Pale Horse, as Che Guevara in Che!, The Night of the Generals, and many more films and TV films followed. And all these films had one thing in common – the brilliant performance and the charismatic presence of the inimitable Omar!

Bridge, racehorses and gambling were his passion and he ranked among the top 50 Bridge Players in the world! I remember him saying at an interview that on certain days, he looses an obscene amount of money that he could almost say that it was all his money flowing in the Casino! He has written books on the card game bridge and had a regular column on bridge in the Times and I still have the paper cuttings. He wrote the foreword for the book, Play Better Bridge by Rixi Markus, which I treasure!

Omar Sharif had a great fan following around the globe, as the charismatic actor and a brilliant bridge player. One could easily get lost in those penetrating brown eyes that showed such intense emotions, almost haunting! There will never be another dashing presence like him and I place him up there with Richard Burton. He is no more, but his films will be here for eternity! May his soul rest in peace!