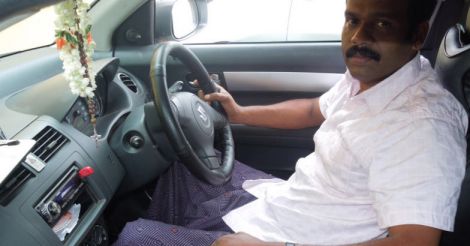 Kottayam: Despite being bound to a wheelchair for over 17 years, Biju Varghese has modified more than 1000 cars to suit the needs of persons with disabled lower limbs.

Biju holds the patent for a retrofitted car, a customised automobile that has a hand-controlled mechanism to operate the three foot pedals- accelerator, brake and clutch.

"An automatic gear-shift car cannot replace a retrofitted car. In an automatic car, only the gear changes automatically. The car has to be accelerated using a foot pedal to gain speed, which makes it difficult to operate for a person with disabled legs," Biju explains

This is where a retrofitted car stands out. The retrofit kit can be installed in an already functional car. The customisation of cars costs Rs 15,000 to Rs 30,000. The price varies according to the type of the car being modified.

"Installation of retrofit kit in small cars like Wagon R and Alto is easy. But, bigger cars like Innova and Tavera require more time and effort, because, a special platform has to be built first to install the retrofit kit," he added.

One of the many beneficiaries of the idea is the international arm-wrestling champion, Joby Mathew. Proximal femoral focal deficiency, a birth defect, left him with deformed hips and under-developed legs. He got a retrofit kit installed in his Fiat Punto in 2014 and has driven more than 54,000 kilometres.

"I find such cars better than their standard version. For me, it is easier to respond with hands than legs," he said.

Biju Varghese received the National Award of the Ministry of Social Justice and Empowerment for the Best Applied Research/ Innovation in 2008 for improving the life of persons with disabilities. More recently, he was rewarded with Cavinkare Ability Mastery Award, constituted by Ability Foundation, an organisation for persons with disabilites.