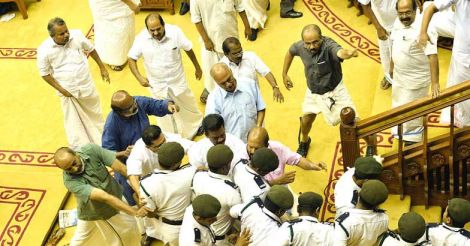 The recent altercations at the Kerala Legislative Hall can be characterized as a low point for that deliberating body.

For independent observers, what is happening to the body politic of Kerala is quite extra-ordinary and, may be, even amusing to some others. However, for the citizen who is working hard to make both ends meet, it is downright insulting to their intelligence. There may never be, in the history of Kerala, a government that has come to power with so much promise and potential like the current one with goodwill from the public. It was supposed to be an administration led by many stalwarts who were instilled with high morals and values through their young days with organizations such as Manorama’s All Kerala Balajana Sakhyam and trained in principled leadership by Gurus like late Pala K M Mathew - a widely admired person known for his integrity a.k.a. the mythical ‘Sankara Chettan’. However, today, as this government led by Oommen Chandy appears to be walloping from crisis to crisis, the question that is on everyone’s mind is, what has gone wrong?

For those who follow the developments in Kerala closely, there are constant allegations of corruption, charges and counter-charges of self-aggrandizement and nepotism and shameless over extension of power only with mere moral incantations. To some, it looks like a zero sum game where gains of those in the power centers are equally balanced by the loss to the Treasury or to public good. Undoubtedly, there is a certain level of paralysis that is gripping the State from effective administration or delivering the goods and services promptly to its citizenry.

How did we arrive at this cross road in history? Aren’t we supposed to be living in a knowledge-era? It is supposed to be a time when technology as an enabler ought to catapult people to greater heights, set new agendas and create solutions to further alleviate poverty, and achieve prosperity through creation of jobs and new business opportunities for its young people. A writer recently asked, “Why is India’s most socially developed state – and one of the developing world’s most advanced regions – an economic laggard?” It is a relevant question as we are witnessing the frantic exodus of Keralites from the war-torn country of Yemen. It is a sad that some of the nurses are even reluctant to go back home from under these horrendous and life-threatening conditions fearing that what awaits them at home is even worse - a heavy burden of debt incurred for their trip overseas and may be a gloomier future!

Despite having the best Human Development Index among in India, and boasting of a healthy gender ratio, Kerala still remains a ‘money-order economy’ primarily depending on the remittances from the Non-resident Keralites and revenue from tourism. Unemployment rate continues to hover around 15% forcing many young people to flee ‘God’s Own Country’ looking to better their lives. The State has little money for social development or infrastructure upgrades and often relies on ‘Sin taxes’, alcohol and tobacco, to make up the deficit.

The reasons for the predicament Kerala is in are widely debated by experts who would list them as ranging from trade unionism to an over-politicized state of affairs that is often under the influence of the pressure groups to advance their own narrow interests. Some would directly blame the influence of successive Communist governments that failed to create an ecosystem that would cultivate a culture of entrepreneurship necessary for job creation.

However, the last few years have witnessed an explosion of market driven initiatives that have become engines of growth in several other states in the country. Neighboring Tamil Nadu is a good example of adapting to the new global economy and exploiting the opportunities to its benefit. The state also has succeeded in securing jobs for the local talent while stemming the so-called brain drain. Undoubtedly, the past few years have been an opportune time for Kerala to be led with a visionary agenda. As Nobel Laureate economist Amartya Sen says ‘Kerala has to learn from the world.’ However, what is taking place in the body politic of the state is not only quite disappointing but shameful.

The recent altercations at the Kerala Legislative Hall can be characterized as a low point for that deliberating body. The expatriates, who have viewed those scenes, sitting afar, were quite shocked and dismayed by the physical violence by the opposition as well as political maneuverings from the governing side of the aisle that run counter to basic civility, decency and common protocol. It deserves strong condemnation and scorn from every concerned citizen.

There appears to be a near break down of discipline in all sectors of the government machinery. The Chief Minister, as the effective CEO of the State must be responsible for strategizing and setting up the short term and long term goals. Instead, he is forced to spend long hours on mundane items that could very well be resolved and disposed at the village, Block or the Taluk level. It would be more productive to direct the bureaucrats to run their departments efficiently and to discourage the politicos and their henchmen from intervening and upsetting the order and priorities of any decision making process merely to suit their own vested interests.

In the past several years, I have met numerous political leaders at the Centre as well as at the state level. However, there is some thing unique about getting an appointment to meet with a political leader in Kerala. One would be surprised if there is not a mob scene at the office, a usual occurrence, as many people might be clamoring to get attention or to get the grievances heard. Amidst all this kind of chaos, there may be an opportunity lost for a young man who might have traveled from abroad to brain storm a promising idea with the officials. He might as well pack up his bags and move on to Bangalore or Chennai where he could get a more patient hearing.

There is very little or no public discourse over important topics such as infrastructure development, job creation, environment or clean drinking water. Most of the discussions in the media and other public arena involve ongoing political brinkmanship or some sensational scandals. The amount of time and energy spent by the top brass in this regard must be having such a disastrous effect on the day-to-day governance of the state.

During a recent visit to the Secretariat, a high ranking official pointed to those mountains of files accumulating on the shelves and told me that I shouldn’t be surprised that most of them might be dealing with grievances or other administrative matters involving the secretariat staff themselves. He said that if he ever tries to enforce any discipline, all hell will beak lose and he will be tagged as anti-union and a crowd would be soon at his door chanting slogans against him.

Another official talked about the growing problem of corruption in every facet of life in the state. He alluded to the fact that budget exercises may have become a fund raising tool for various vested interests. It is alleged that selective leaks on impending tax hikes would force scores of business owners to cough up huge sum of money to forestall any such action. The success of Gold retail merchants in reducing the proposed tariff a year ago is a story that is repeatedly told to illustrate how the current system works. To many of us, these methods sound more like ‘shake downs’ as they are described in the West. One of the reasons for the shortfall in Government revenue is said to be the meddling by power centers to give favorable breaks to their clients who end up paying substantially lower obligation than what is actually due.

Many of the technology projects with fabulous names are alleged to be no more than real estate projects. These projects involve those people with a ton of money who could take over the Government owned properties for the so-called 99 year lease with some vague promises of employment or collaboration with an overseas entity! One should wonder about the verification regime and how termination of these leases will ever be a realistic option once the land has exchanged hands and the project goals are unfulfilled!

Today, the UDF Government led by the Congress Party appears to have lost its moorings and the courage to rein in corruption. It is said that if one hasn’t learnt from history, he is doomed to repeat it. The recent defeat of the Congress party at the Centre should have given a pause to the state leadership to think right and to take some bold and much needed corrective actions. Coalition partners in the UPA government at the Centre have let that Government down by creating a perception of widespread corruption though the country was led by Manmohan Singh who is a man of integrity and honor. Just as it was in the case of UPA, the number of reforms and other initiatives undertaken by UDF seem to be lost in this political scuffle and may prove to be costly to the Congress party in the upcoming election.

It is not the length of the term but the quality of the governance that will determine the legacy of the current UDF government. One would never attain good governance running away from truth and justice. Let us hope the current government will have the wisdom to stand up and call a spade a spade. Yes, there is urgent business to take care of on behalf of the people of Kerala such as providing jobs to those stranded nurses in Yemen who are afraid to come home!

(Writer is a former Chief Technology Officer of the United Nations and Chairman of the Indian National Overseas Congress, USA)