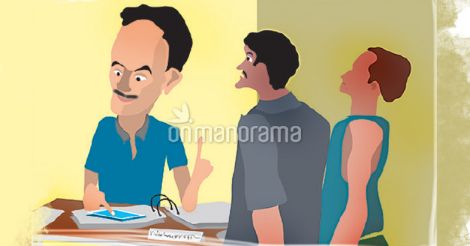 My school certificate has the name Francis Fernandez. In my ration card, it is Francis T. Mavelikkara. In order to earn a passport for my son, I have to prove that same person owns both names. Recently, I was wading through the govt. offices to find a solution to this.

When I went to one of these offices, I was relieved to know that the concerned file had reached the table of the Superintendent there. As I went to his seat, I found him busy feeding something in his cell phone. I waited patiently to see him complete the job. After sending the message, he turned towards me. I began to narrate my problem. Soon his phone gave a ring. He attended the phone to read the message and that ended up in a naughty smile. Again he was busy feeding the phone. After sending the message, he looked at me as if I am a stranger. I started all over again. But his phone was not willing to be patient. Thus he went back to it.

In the mean time, my eyes flashed through the office. Most of the staff was busy with their mobile phones. In a corner I could see a group engaged in enjoying the visuals in a phone. When Superintendent came back to me again, a member from the group approached him with the visuals. In between the bliss of the visuals, he wanted to know how his colleague Suku got such impressive visuals? Soon came the reply from the man who came with the phone: “You know, he has got high level connections”.

I didn’t know how I could grapple with the plain sense that I am incapable of proving myself in this scramble. ‘Superintendent is busy with WhatsAap.. Don’t disturb him’, I jotted this down in a piece of paper and put it in the complaint box as I left the office. Next, I had to attend a cultural meeting in a nearby school.

When moving through the veranda of the school accompanied by the PTA president, I saw a lady teacher with her face plunged in the mobile phone. What’s in the mobile?, enquired the PTA man. ‘I felt the intuition of a poem. ‘If I hadn’t entered it right away, I might miss it’, she explained. ‘You know, she is a renowned facebook rhymer’, he exposed my ignorance.

There are lyricists who have a perpetual presence in the facebook all through the year. They are not posting their lines but themselves.

The meeting began. I could see people’s representatives on both sides of me. Their heads were thrust in the mobile phones as the welcome speech was going on in free rein. He was welcoming the guests recounting their numerous qualities. Unfortunately they were not at all aware of this depiction. I poked the person beside me asking him at least to attend to those words.

What right has these government officials to kill their duty time with mobile phones? There are rules to punish those who use mobile phones when driving. What if they are engaged in chatting? Sir... is theren’t anyone here to look into this?