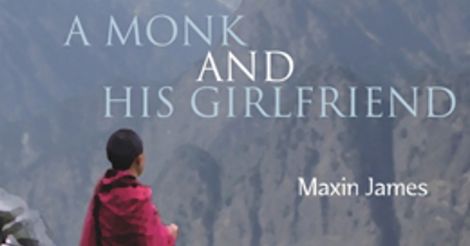 It's not the latest Hollywood movie but Maxin James, the author of A Monk and his Girlfriend, has a lot to tell about his book. Maxin is a company secretary by profession and has been practicising in Cochin with a reputed company. But he is also very passionate about mythologies, nature, travelling, reading and rambling along the sea shore and backwaters. London-based publishers, Roman Books, known for publishing good quality literary works, showed interest in publishing the book which tells the story of a young Monk who ran away from a Himalayan monastery in search of his girlfriend.

Kartik knows he must choose between monkhood and his desire for Moyana, his old college mate. The young monk is aware that he is not able to get rid of the desires of his youth and his love for a girl, though he had took his vows as a monk to find the answers to his dreams and his quest for enlightenment. He knew that a revolt against the holy traditions of the monks of Pangchi will incur the curse of his masters especially since he might be next torchbearer of the monastery, after the death of his teacher. But he chooses to take the risk by running away from the monastery in search of Moyana. In his journey the young monk finds the meaning to his life, his call as a monk and deep understanding about monkhood, struggles in life and destiny.

The story shows the courage of a young and capable disciple of a Himalayan master to revolt against tradition and his readiness to bear the curse in search of his dreams. At last, it's his courage and desire to find real freedom that moulds him and make his life complete. It's all about handling risks in life and its aftermath.

Maxin has shown great interest in the tradition of monks even from a very young age. After completing his graduation in mathematics, he got an opportunity to read Nirvana Upanishad. It thrilled his soul and further took his interest to sanskrit texts and translations about the basic characteristics of a monk who reached Nirvana. This paved the way for writing an analogical deduction of this Upanishad, and after six years it ended up as a fiction.

During the work, he had realised that the theme of the story is not easy one and being a tough subject it will not have a mass appeal. However, he concentrated on the crafting of the story presentation and realised that the art of storytelling is key and once you master it, you can handle any subject. The story takes us on a journey along with a young monk from a monastery of Pangchi along the India-Tibet border and reaches the southern tip of India at Nagercoil.

It was Maxin's sister, who is doing her chartered accountancy course, who read all the drafts of his work over the years and was his harshest critic. Maxin derived most of his characters from his friends and also used their body language and mannerisms to create the fiction. These friends also showed strong faith and stood by him during the entire work. However, his mother never heard the story or even read a word from the manuscript. Maxin says she was the most eager person to see the book. She used to enquire about the book even when she was terribly sick. However, she left him before his debut novel released.

A Monk and his Girlfriend is now available in the market, initially through online outlets.