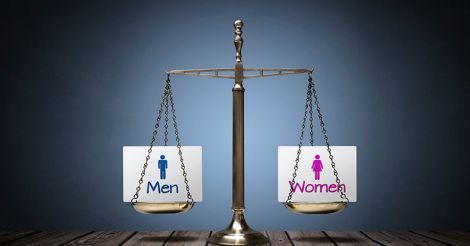 April 12th, 2016 was Equal Pay Day. This day symbolises when the woman's earnings catch up with the men's earnings from the previous year. The gender wage gap is a vast topic for debate, with people throwing jabs back and forth about its plausibility. Numerous experts and researchers have proved it to be real, but nevertheless, the allegations continue.

This article isn’t about the wage gap, nor is it about feminism. That would take up many volumes of a novel (if I’m the one writing it!).

This is about the “meninists” and the people who mock feminism, carelessly reducing centuries of strife and turmoil to belittling and infuriating comments.

If you’ve come this far, don’t turn around. This is a serious issue.

The patriarchy is a persisting influence on the way society treats women, and is a worldwide problem. In developing countries, backwardness continues to enforce its prominence, and in developed countries, women are still two steps behind their male counterparts.

Most often, it is because, no matter how grave the statistics or facts, pride replaces reason. “How can everyone’s attention turn to women after years of doting over men?” they question.

Whether it is objectification, or giving more professional opportunities for men, or the fact that married women receive lower pay rises than married men, women are always perceived as the inferior sex. As Emma Watson rightly said, “It is time we see gender as a spectrum instead of two sets of opposing ideals.”

Feminism stands for gender equality as a whole. Its intention is to make the world a better place, not tear it down, and it aims to do so by completely removing gender as a social construct. If the world’s entire working population is given the same opportunities, we collectively prosper. How can that be something negative?

We need to understand that by labelling yourself as a feminist, you are not restricting yourself, but reaching out to a less narrow-minded perspective. The motion does not stand for the apotheosis or glorification of women, it is the demolition of the idea that anyone should be put on a pedestal because of their sex. Let’s do away with those stereotypes completely. Don’t shove feminism into the bin because it’s an “overdone” concept. Embrace it; it’s a progressive step towards making the world a more accepting place to live in.

(The views that have been presented are personal)