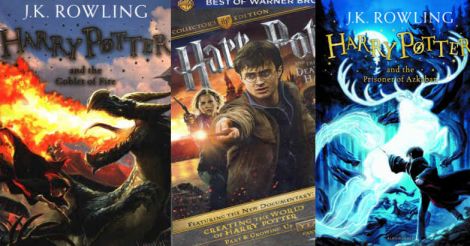 I have often thought that the Harry Potter books and movies are much more than fantasy and Children’s literature. Yes it tells us about an imaginary world and its central character(s) are children. But the philosophies contained in them are profound. When we look at the antagonist of the story, we find a man who is trying to conquer death. If we make a reading of the story with the idea of conquering death as the central theme it is very rewarding.

The central argument in this respect is that those who try to save their lives lose it and those who are prepared to lose it, for the sake of others, save it. There are many instances in the movie which point to this fact. The movie talks about a resurrection stone which can bring back dear ones from the dead. The central character, Harry Potter gets possession of this stone inside a snitch containing the engraving, ‘I open at the close’. The snitch opens up and reveals the stone only after Harry decides that he is going to sacrifice his life to stop the dark lord, Voldemort.

Harry however leaves the stone behind and walks up to his enemy ready to face his death. He survives the attack suggesting that those who are prepared to lose their life will find redemption. He is not the only character in the story who is ready to confront death to save others. Another important character, Albus Dumbledore, the Hogwarts Headmaster also does the same. Other characters like Severus Snape, Sirius Black, Remus Lupin and others do the same. The thing to be noted is that they are fully aware of what they are doing and understand the fulfillment of life is not in living long but in living for a cause.

Death is not the greatest tragedy in the Potter series of books and movies, but the absence of love. Dumbledore says, “Do not pity the dead, pity those who live, especially those who live without love.” It is the act of Lily Potter sacrificing her life for her child which protects young Harry from death at the hands of Voldemort. To give up one’s life for another is the greatest form of love. Dumbledore explains to Harry that it is this love that protects Harry whenever Voldemort tries to kill him. Therefore we can say that it is love which helps a person to go beyond death. Severus Snape is able to love Lily Potter after her marriage to James Potter and even after her death.

His love is not affected by the fact that she does not return his love. Even after her death, without telling anyone else, he continues to protect her son born of James Potter. Snape provides the picture of a person whose love goes beyond death. The reality of death is challenged by the presence of love in the Potter series. Many of the characters including Neville Longbottom point to the fact that those who die for love or for a good cause remain alive in the hearts of others. Love can helps us transcend death.

Now let us look at the antagonist. A man born in a relationship where there was no love between the parents. Although it will be a great crime to say that all people who are born in this manner are incapable of love, the series presents the character Voldemort as a person who is incapable of understanding and enjoying things like love and friendship. For him the world is ruled by power and acquiring power and immortality is what matters for him. He wants to live forever and be powerful forever. In his search for immortality he learns about Horcruxes. Horcruxes are objects into which one can transfer pieces of one’s soul. Voldemort learns from Horace Slughorn, a teacher at Hogwarts School, that, the soul is split into pieces by violating the order of nature and committing murder.

Thus Voldemort decides to become immortal by taking the life of others whereas some of the other characters found that immortality can be achieved by giving one’s life for others and accepting the notion of death. The fact that Harry gives up the Resurrection Stone and the Elder Wand (the most powerful wand in the world) tells us that he gives up the notions of eternal life on Earth and ultimate power. The series tells us that one gains by giving and loses by trying to take forcibly.

Although all of these things happen in the imaginary world created by Rowling they hold true even in the real world. Even in nature, we can see that a plant is born when the seed decays. As the plant cannot be seen as an entity separate from the seed from which it grew, we can say that the death of the seed leads to its resurrection as a plant. This is what happens in the case of Christ also, as he gives up his life willingly for others and is resurrected. Thus we can say that the Harry Potter series of books and movies offer us something more than entertainment. And the above mentioned factors contribute to the ever growing popularity of the series.

(Disclaimer: The views expressed in My News are solely those of the author in his/her private capacity and do not in any way represent the views of Onmanorama or any other entity of the Malayala Manorama)