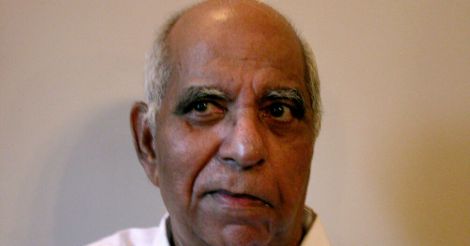 Kerala's industrial scenario was different four decades ago. It was not long before Padma Bhushan Kunnath Puthiyaveetil Padmanabhan Nambiar, alias KPP Nambiar had made significant contributions to reshape, democratize progress, and offer solutions to the social riddles through cutting edge technologies. Though KPP himself grew into an institution beyond his brainchild KELTRON, he took pride in being known as KELTRON NAMBIAR.

The inseparable passion of a creator

A rare visionary, creative thinker, institution builder, administrator, tough task master and humanist to the core, KPP gave the State of Kerala, a facelift with his unique eco-friendly, village-centric development concepts when the Kerala villages remained slumberous without means of transport, communication, conveniences of decent livelihood and doomed of income generating avenues. KPP, hailing from Kalliassery village in Kannoor, had in his mind the struggles of the teens to come to the forefront. He commenced a mission committed to the hapless youth of Kerala, when he took up the mantle of Keltron, which he continued throughout his life. This mission resulted in the rise of 32 odd companies coming up in remote hamlets in the 70’s and 80’s in Kerala, reengineering the warp and weft of the socio economic scenario of the areas. Kalliassery also got its share of benevolence form KPP in the form of Keltron Component Complex.

KPP’s agenda revolved round the thrust areas like comprehensive technological self-reliance, rapid industrialization without intrusion into the ecosystem, and creation of new employment opportunities. Adhering to the promotional role of Keltron, the initiatives of KPP to create entrepreneurship culture in the State reaped rich dividends through a chain of ancillary units, many of which have even grown many folds ahead of the promoter company. KPP has enabled to spawn a swarming, and diverse emerging universe of entrepreneurships, minting trillions of foreign and Indian currency. The society at large has to give standing ovation to the visionary for breeding bright techno entrepreneurs across the country, thus contributing immensely to the national exchequer as well as the Nation.

A realistic judgment of the contributions of KPP can be made only through intricate studies spanning the level of self reliance in critical technology brought in for the Nation like the blunt decision to design indigenous Super Computers when the US imposed ban on imports, institutions launched, companies promoted, infrastructure developed, jobs created, technocrats groomed, social wealth generated and lives touched. KPP, who is thrilled to be called as an Indian had decided to quit the lucrative positions in UK in early sixties, at the call of the Nation in his most vibrant formative years to join the Scientist’s Pool launched by Prime Minister Pandit Jawaharlal Lal Nehru, to attract Indian Scientists abroad to create a road map to self reliance in technology.

Business bee hived in Kerala during his tenure in Keltron as well as when he was the policy Advisor to Kerala Industries Minister. Research and industry empires he has created, innovated, improved, nurtured and mentored outnumber the wildest thoughts of any modern exemplary professional. He turned out to be a great motivator to the technocrats, the non-technical personnel, the socially dejected, physically challenged, and the under privileged. He has been able to moot several innovative concepts for empowering the people at grass root level including women and the adivasis.

The Keltron group of companies, NATPAC, Technopark, Indian Institute of Management, Kozhikode and Indian Institute of Information Technology & Management, Trivandrum, in the Kerala State sector and Electronics R & D Centre, Thiruvananthapuram, Pune, Lucknow, Mohali and Kolkata, Centre for Development of Advanced Computing (C-DAC), Pune, ten VLSI Design Centres across the country, Centre for Electronics Design Technology, (CEDT) in Mohali Gorakhpur and Kozhikode, National Software Centres at Bangalore and Pune are standing monuments to the zealous acumen of KPP. The drive initiated by him in ITI, Bangalore to formulate a consortium of 41 ancillary units for the manufacture of telephone instruments won instant laurels from the industry. His tenure as Secretary to the Government of India, in the Department of Electronics had enabled to consolidate his prowess as an administrator too.

Awards came in galore to KPP including the belated National honour of Padma Bhushan in 2006 for the contributions to Science and Engineering. ELCINA Electronics Man of the Year Award ( 1994 ), Vasvik Award ( 1986), National Design Award ( 1985), Kerala Science & Technology Award ( 1978), Republic Day Award by the Invention Promotion Board (1973), Institution of Telecommunication Engineers Award( 1963), London County Council Major Award for excellence in post graduate studies at the Imperial College of Science & Technology, University of London(1955).

The revolutionary thoughts of KPP have enriched the lives of thousands of common men, initially in the niche electronics sector and later to his passionate areas including Information Technology, education and so on. As a charismatic leader he has mentored tens of thousands of young breed of engineers and researchers across the country and had a special knack to spot the best talent.

He had a Dream

We have seen experts, administrators and lawyers offering excellent contributions to the public by entering into politics. KPP was comfortable with the doyens in the Indian politics. Indira Gandhi, Rajiv Gandhi, Jyothi Basu, EMS, C. Achutha Menon, AK Antony and Ommen Chandy and many others hearkened to his words. He enjoyed the freedom to contact them over phone at any time. He was a good friend of the late President of India KR Narayanan. But, KPP lacked a godfather to initiate him into real politics. I believe that we have missed a very significant opportunity for the last few decades by not roping him into the top notch policy making ambit of the Governments, which otherwise would have certainly provided a brighter facet for the State, than that of now.

The State of Kerala has shown unenviable resilience, irrespective of the political affiliations to cast shadow over the real contributors and KPP was not an exception. He was sent out of the State with wounded minds. Government level recognitions were either thwarted or delayed. The State of Kerala, amidst umpteen numbers of other political fooleries, failed miserably to get the pie for son of the soil, despite the changing affiliations of the Governments. On the contrary, Karnataka took the credit for fostering “one of the greatest innovative Indian minds” of the era, (as acknowledged in black and white by Dr APJ Abdul Kalam), with its nomination for the Padma Awards for 2006.

In a path breaking way, the Government of Kerala under the stewardship, of Oommen Chandy and the Industries Minister P.K. Kunhalikutty, for the first time the history of any public sector, has been proactive in honouring the Keltron Man by bestowing full state honours at his funeral held in the Keltron Nagar, Kallaissery on July 1, 2015. In fact, the conduct of the funeral was a rich tribute to the industrial Kerala in toto.

A Rarest Salute To Industrial Kerala

He Came, saw and conquered. He has gone-in a mesmerizing fashion, untold ever in the annals if Kerala industrial history. Padmabhushan KPP Nambiar, was laid to rest with an unparalleled gesture by the Government of Kerala. For the first time in the history of any public sector, by bestowing full state honours, apart from the last rites arranged in the official campus of Keltron Component Complex, Kallaissery. A Rarest opportunity ever an entrepreneur ever had in the State.