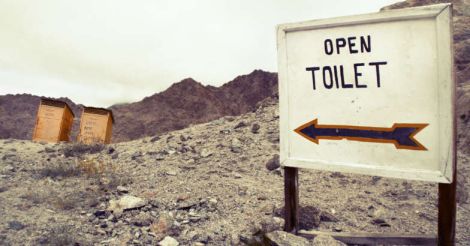 Have you seen the electronic toilets in Japan? These toilets magically lift its lids by merely pressing a button and congenially warms its seats upon our arrival. Thet also have the solicitous electronic bidets with its controls, ranging from essential to opulent.

In Tibet, the lavatories are hostile holes in the ground looking forward to our Spartan squats.

The situation in India is rather different. Not too long ago, in Jharkhand, a 17-year-old girl tied herself to a fan because she couldn’t untie the drawstring of her Churidar and defecate in privacy, safety, and dignity, probably not.

This incident took place in nation where a mobile phone seems to be more accessible than a toilet.

But isn’t the national campaign following in the footsteps of the man who placed sanitation above political independence going to expunge open defecation with its gung-ho construction of pit toilets? Is it?

The data from the 69th round of the National Sample Survey shows that, toilets remain inaccessible to 60 per cent of rural households and 10 per cent of urban households, but the data from the SQUAT survey conducted by the Research Institute for Compassionate Economics reveals that, 40% of households that have a working toilet have at least one person who regularly defecates in the open.

Why? The average Indian open defecator will have one of the 5 reasons to give:

While the last reason is a matter of financial stabilty, the first four reasons concern a person's mentality.

“Bahu betiyan bahar na jayein, Ghar mein hi shauchalay banvayein [Daughters and Daughters-in-law shouldn’t go outside, build a toilet inside your house]”, the aforementioned slogan and similar slogans, plastered on walls, printed on papers, and played on televisions, are trying to win two battles with one fight, the battles against open defecation and sexual violence against women.

But in doing so, Swachh Bharat Abhiyan’s advertisement campaign seems to have genderised some of the most basic amenities.

What’s common between cookers, cleaning liquids, and toilets? They are only to be used by women!

It could be noted that an open defecator might sit down with his family for food and brood silently about the frequent episodes of diarrhoea suffered by his malnourished and stunted children without realising that his, his family, and several other families’ practice is partially responsible for it.

The majority of toilets being built under the national campaign are pit toilets. A pit toilet collects faeces in a pit or a hole in the ground and this pit has to be emptied, it’s usually manually emptied.

Compounding the complication concerning clearing of pits is casteism. Decomposed excreta can be emptied safely but according to tradition, only “untouchables” must empty it. The stentorian voice of dogma has yet again resounded in the mind of the nescient individual and dissuaded development.

The matter of unaffordability of toilets for the landed and landless families will come undone with the construction of household toilets and community toilets, but what about the matters of mentality?

Disclaimer: The views expressed in My News are solely those of the author in his/her private capacity and do not in any way represent the views of Onmanorama, or any other entity of Malayala Manorama