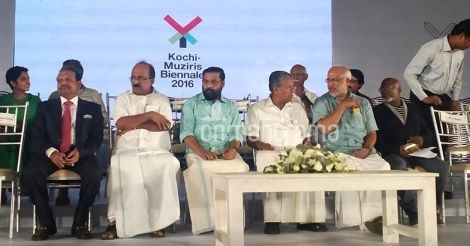 Kochi: Heralding the arrival of the days of renewing Kerala's visual sensibilities, the third edition of the Kochi-Muziris Biennale opened here at a splendid event on Monday evening.

“Lack of a permanent venue is a challenge,” the chief minister said, addressing a crowd of artists, art lovers, other dignitaries and commoners.

“I promise to support Biennale Foundation to set up a permanent venue,” Pinarayi said and added that the Kerala government has earmarked Rs 7.5 crore this time for Biennale. It is the highest amount allocated by any state in India for an art event.

KMB 2016 curator Sudarshan Shetty outlined his vision for the third edition of the Biennale, which is titled 'Forming in the pupil of an eye'.

Prior to the inaugural function, a 'chenda melam' of 150 percussionists led by Padmashree Peruvanam Kuttan Marar enthralled the dignitaries and public.

After the ceremony, a concert by noted singer Suman Sridhar and The Black Mamba was held.

Highlights of the event

» The artists include writers, dancers, poets, musicians and theatre practitioners along with a host of visual artists from 36 countries.

» The main exhibition will be supported by ancillary program of talks, seminars, the Students' Biennale, the Art By Children exhibition, workshops, film screenings and music sessions.

» Other venues include Pepper House, David Hall, and Durbar Hall