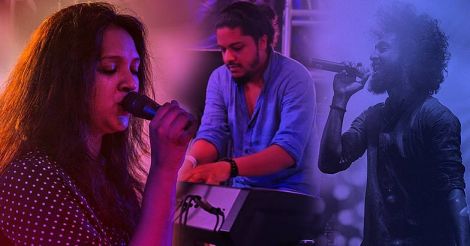 Kottayam: If food ever needed an accompaniment, it would be music. It needn't always be the soft, swaying jazz numbers that take over your senses, and for the concluding day of the 25th edition of Kottayam Round Table 121's food festival, the band of choice, Vidwan, had the same driving factors for their music that the food festval had—electric, eclectic and buoyant energy. 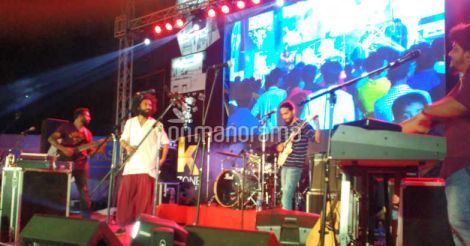 'Vidwan' on a roll in Kottayam. Photo: Arathi Kannan

The 'folk electronic alternate band' from Thiruvananthapuram was all set to make some noise, all in a good way. They pitched their first number, 'Kavile pennae', a track that gave way to a lot of acoustics ranging from the guitars, keyboard, with the added percussion of drums and chenda. Neha Nair led the vocals of a particularly interesting track that started with the affecting deep hum of 'Shanghu' and led the crowd on with a lovely piece of saxophone blending well with the mood of folk. 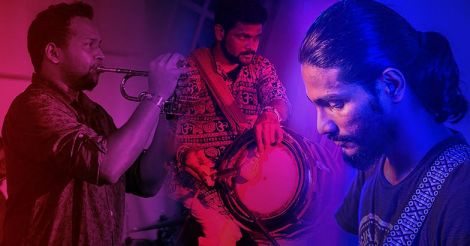 The song that started with strong Carnatic flavours with accompanying tonal variations of kombu, shifts gear and beats to a folk-like rhythm, swiftly infusing some English lyrics in between. A rumble of the old-meets-new echoes after the song, which easily gets the song pinned to your brain.

In the 'Kaithola' number, the percussion worked wonders around the strings that sets up a track that alternates the feel of the rustic with techno sounds. Vocals led by Neha Nair and Anoop Mohandas, and the effortless merging of the chenda and mridangam made this layered composition all the more engrossing. The crowd seemed to take to this number rather well, for they were singing along.

Vidwan chose to play the promo song that they had composed for the Malyalam film, Romans, called 'Ellelo' as their next. With heavy percussion, Anoop Mohandas led the vocals taking it to thrilling heights.

The band engaged the crowd with a light talk about toddy for the womenfolk, an idea that runs along their composition 'Toddy', a song that celebrates Kerala's favourite beverage. Leaning on percussion again, punctuated by the keys and guitar, the astuteness of the composition gets your attention; A light breezy prologue with sassy lyrics about the rain and toddy, it literally makes you feel the drizzle, only to conjure a hale-storm awhile later. The folk part of the song is catchy, mixed well with an electro element. 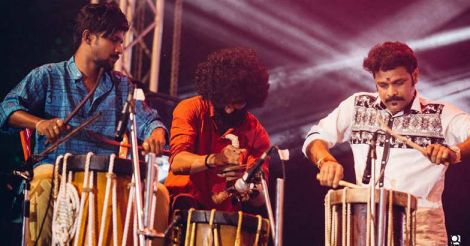 The band also played to the field and rocked the Ilayaraja number 'Ilamai itho itho' from the Kamal Haasan starrer Sakalakala Vallavan. Next up was a couple of A.R. Rahman numbers, 'Usilampatti penkutti' from Gentleman and 'Aarolmale' from Vinnaithandi Varuvaya, sung to impressive alacrity.

A few Hindi numbers also followed suit and the crowd was jiving to the tunes, rightfully celebrating the food, music and themselves. 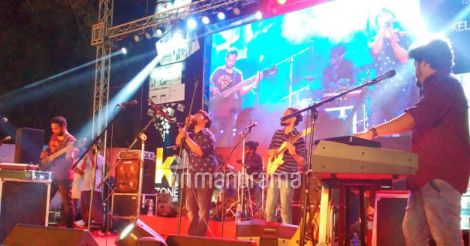 If your visit to Kottayam town coincides with the dates of the annual event of Round Table 121 food festival in the foreseeable future, never give it a miss, for the event not only caters to the gourmet needs of the potential food enthusiast, but also dishes out a chance to be part of something noble—the money generated from the festival goes to Sparsh Round Table Special School, managed by Round Table 121.