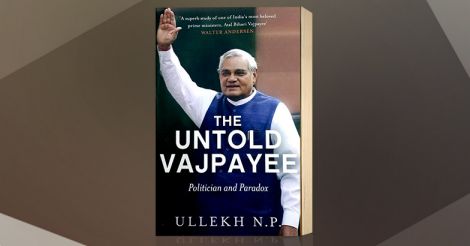 Considering the pivotal figure he has been in the political evolution of independent India, Atal Bihari Vajpayee hasn't unfortunately attracted the serious scholarship that he deserves.

Beginning in the 1950s and 60s as a fiery opposition MP to the Nehru and Indira regimes, going on to become the foreign minister in the brief Janata government (who famously held forth at the United Nations in Hindi), and finally in shepherding the unwieldy coalition NDA government during 1999-2004 to become the first non-Congress PM to complete the full five-year term, Vajpayee is a central character in the great Indian political drama.

Ullekh N.P's book - 'The Untold Vajpayee' - is therefore a much-welcome political biography of the man and to a good extent, of the nation.

As the South Asia expert at John Hopskins University, Prof. Walter Andersen, says in the foreword to the book, the author is narrating Vajpayee’s life and times, taking us on a tour of the twists and turns of Indian polity.

The book of course has a special unmistakable relevance in the present context, when a BJP government under prime minister Narendra Modi threatens to marshal their electoral propaganda of 'Congress-mukht Bharat' into the realm of reality. 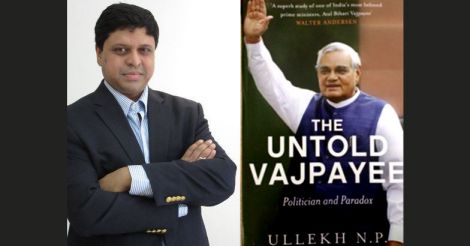 Ullekh N.P's book - 'The Untold Vajpayee' - is a much-welcome political biography of the man and to a good extent, of the nation.

Although Ullekh doesn't dwell much on Vajpayee's legacy and entirely stays out of Modi's shadow (perhaps deliberately but also correctly), the book is important to understand BJP's transformation from a fringe Hindu nationalist Jana Sangh to a party having firm footprints all over India.

After the brief first chapter, which narrates dramatically the rise and fall of Vajpayee's 13-day government in 1996, the book goes chronologically through the life of Sangh Parivar's perennial go-to man.

We encounter the boy whom his father wanted to shield from nationalist politics, but who is nonetheless attracted to RSS early on in life, dabbles in Hindi poetry and excels in academics, and in the early 1950s and 60s comes to be mentored by the Sangh's pioneering duo, Syama Prasad Mookherjee and Deendayal Upadhyay.

The second chapter of the book is titled "Gandhi, Marx and Gita", ostensibly indicating Vajpayee's formative influences, but intriguingly it says very little on how Gandhi or Gita influenced the young Atal.

Instead, a good chunk of the chapter is devoted to setting the record straight about Vajpayee's role in the freedom struggle. This issue had erupted into a controversy around 1998, with the BJP having always claimed that Vajpayee had actively participated and courted arrest in the Quit India agitations, and the Congress alleging he had played the role of an approver for the colonial police. The author deftly lays out the facts and shows how Vajpayee himself was much more modest about his role in the national movement.

The clue to what holds the whole book together lies in the sub-heading to the title: "politician and paradox". Ullekh is able to show through this biography that Vajpayee was the consummate politician who was above all defined by paradox.

As a man who loved his drink and non-vegetarian fare, and had an unconventional living arrangement, sharing a household with his former girlfriend, her husband and daughter (who Vajpayee adopted), he was far from the puritan and the ascetic more characteristic of the Sangh leadership.

It is not surprising that in these days of a BJP government with a brute majority at the Center and an executive determined to have its way past a disruptive Parliament and stubborn judiciary, Vajpayee (and even Advani, ironically) comes across as benign figures who left a legacy of political bipartisanship and tolerance, notwithstanding their occasional forays into Hindutva.

Indeed, Ullekh ends the book with high words of praise for Vajpayee from the Congress leader and self-confessed secular fundamentalist, Mani Shankar Aiyar, who calls Vajpayee "the best Congressman the party never hard".

This is not a densely packed, heavily footnoted biography; it is perhaps for that very reason eminently readable and accessible. Although there is little in the book that is not already there in the public domain, Ullekh, the executive editor of Open magazine, has done a valuable job stitching together a fine narrative, peppered with interesting anecdotes, that shines much light on the life and times of one of the tallest leaders independent India has had.