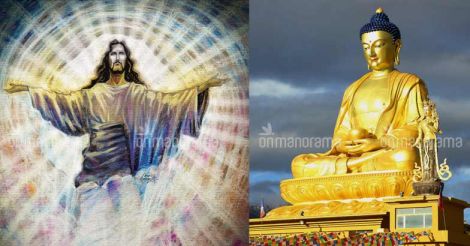 I want to load my boat

With those waiting, thirsty ones

Who are left behind

And carry them by the opal pool

Read: The living and the dead

When you begin to share and care for all things around you, you begin to shed your ego and start feeling the light of heart. Compassion moves in to work wonders for your heart and soul. That speaks volumes for enlightenment. Enlightenment happens to a person who has entered a state of acceptance, love, and sharing, when he is able to absorb pain, grief, sorrow, happiness, or even ecstasy, without disturbing the equilibrium of being tranquil with himself.

Enlightenment stems not from detachment, but from acceptance of realities as truthful happenings to the self, within the universal order. One traverses this path when one is able to be compassionate without the thought of the self at all. Enlightenment, or self-realization, though simple to preach, is not easy to practice. Happiness and peace are not easily attained either. But truly, the rewards in seeking enlightenment are great. Even the seeker is blessed. As Andre Gide said, believe not one who said he has found the truth… believe the one who says that he is still searching.

Read: Inflation, my little one

You and I have specks of self-realization, or enlightenment floating within us. Yet, you and I don’t seem to want to totally realize it. Perhaps the ego or selfishness binds you and me and prevents our own self- realization. You and I, unlike Jesus or the Buddha, do not unite all those specks to make for ourselves one wholesome beacon of lit tranquility that we call, happiness, or peace. When we learn to unite the floating specks of enlightenment within us and succeed in binding them together, we are empowered to erase the outer self or the ego. Then, the inner self made of selflessness, blossoms. This flower has all the petals of enlightenment. It is this flowering of tranquility deep within each self, that dissociated Buddha from the restless Siddhartha, the prince fumbling in the dark world of sorrows and discontent.

Enlightenment or self-realization lies within each and every one of us. It flows from the inner self, in the celestial murmurs of the inner voice, and by the streams of infinite empathy. The human mind is most beautiful here. To be enlightened, one must enter one’s own mind, wherein lies a terrain, a path of selflessness and love that is hardly ever explored. All that we traverse is the path outside our own mind, barbed every moment and all over, with the thorns of selfishness, ego, jealousy, prejudice, impatience, hurt, worry, fear, and anger, where virtues of empathy, sharing, selflessness, transcendence, compassion, and love remain occluded.

Read: The milk of kindness, and unkindness too

Think a moment of Hitler. After burning up nearly six million Jews in gas ovens, was Hitler a happy man? He walked about with a cyanide capsule in his mouth every day and ended up a depraved being, whose bitter end marks the single largest relief in the history of mankind.

The inner self works in the estate of our beautiful mind, capable of infinite selflessness that we plow down with our ego, prejudices, jealousies, and selfishness, bringing misery to each day of our life. What must we do to turn each day to happiness born of self-realization?

Think a moment of Mahatma Gandhi. Gandhi lived and acted for humanity by listening to his inner voice that gushed forth confidently from his Inner Self. What does the inner self really do? It works with embedded qualities that lift the heart, allowing it to bring down the ego, and lets it flower forth with love and understanding for living things around us. It cleanses the ‘outer self’, allowing for relaxation, rejuvenation, truthfulness, and peace of mind. These states amount to the enlightenment that we seek in our daily lives.

Think of Jesus and the Buddha. What made them human beings greater than the rest of us? It is just the virtues that they practiced in their daily life. They lived empathy, compassion, love, selflessness, and sharing that gave them a godly dimension to their human side. To them, personal sorrows were not as important as were the sorrows of others. Both Jesus and the Buddha lived out love.

They made it possible for themselves to rise to exalted states of living by enlightening themselves, because, above all, they realized themselves, and by doing so were able to enter the lives and joys and sorrows of others who flocked around them. They gave us this lesson of enlightenment for us to learn from, to adapt, to make others happy, and thus, to let the self be at peace.

While we pray to the Buddha and to Jesus, are we really following them, to liberate ourselves? Are we looking inward, as they did to reap the joys of calm, guiltless lives where the conscience is above all clear and is the source of the fountain of enlightenment?